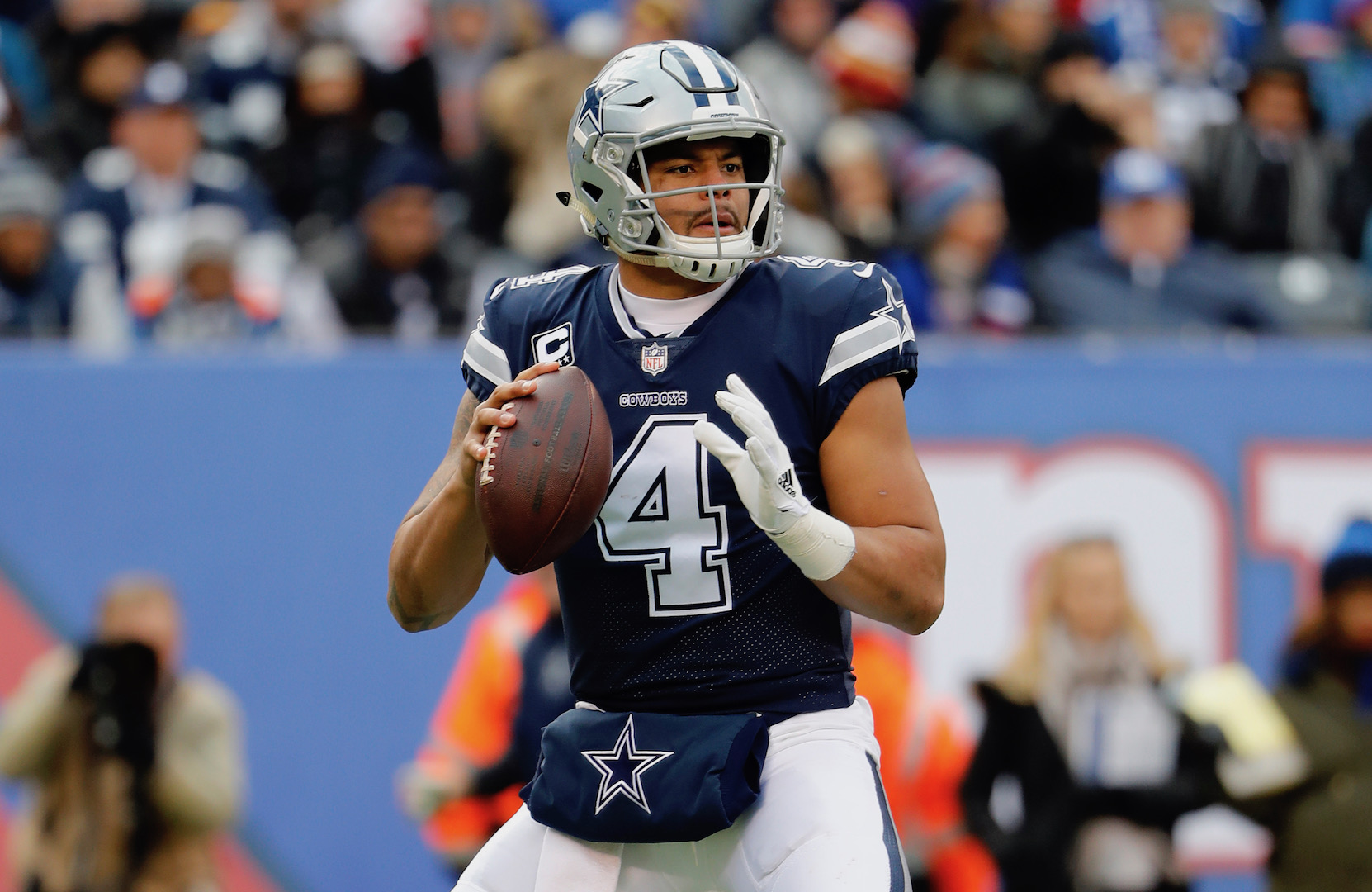 
Besides Ezekiel Elliott, can fantasy owners trust anyone for the Cowboys in 2018?

Through two NFL seasons, Dak Prescott has completed 65.2% of his passes for 6,991 yards and a 45:17 touchdown-interception ratio in 32 regular season games. He’s also rushed for 639 yards, 12 scores, and 50 first downs on just 114 attempts. But after finishing as the overall QB6 as a rookie and following it up with 20.5 fantasy points per game over the first half of 2017, the wheels fell off when Ezekiel Elliott was suspended, as Dak only had one game with more than 14 fantasy points in the second half of his sophomore campaign, including outings of -2, 3, and 5.

So, is Prescott the guy we saw take the league by storm in 2016 and then start off hot in 2017; or is he the guy that threw for 181 or fewer yards in six of eight games with only six touchdowns in the second of last season? Most likely, it’s somewhere in between. The 25-year-old still finished as the QB11 with Zeke suspended for a chunk of the season, and heading into 2018, I think they Cowboys got better at receiver with Allen Hurns, Michael Gallup, and others replacing Dez Bryant (who didn’t really mesh with Prescott’s game). I’m probably undervaluing Dak right now by having him just outside the top 20 fantasy quarterbacks.

Ezekiel Elliott obviously had his 2017 season impacted by an ongoing legal battle that eventually concluded with a six-game suspension being served from Week 10 to Week 15, but he still finished with 242 attempts for 983 yards and seven scores on the year. Plus, when he was on the field, Elliott looked slightly out of shape and sluggish. I don’t think that will be the case this year, though, and the Cowboys are going to feed Zeke behind a dominant offensive line that added second-round pick Connor Williams in April’s draft. The safest bet to lead the league in rushing for the second time in three seasons, Elliott is currently a top-five player for me.

If there was a silver lining to last year’s suspension, it was the emergence of Rod Smith as both a runner and receiver out of the backfield. In extended action, the 26-year-old rushed 55 times for 232 yards (4.2 YPC) and four touchdowns, also adding 19 receptions for 202 yards and another score. He did that while splitting touches with Alfred Morris, but in 2018, Smith should have the backup job to himself. He’s one of the top handcuffs around and is worth considering at the end of fantasy drafts.

If forced into the starting lineup, Bo Scarbrough would be a solid fantasy option based on pure opportunity behind one of the best lines in football. That said, I wouldn’t get excited about him as a league-winning talent because he is a two-down player with limited burst and wiggle. Tavon Austin is also going to be involved in the backfield as a gadget player, but it would be surprising if offensive coordinator Scott Linehan was able to get more out of him than Sean McVay did.

Former Jaguars breakout Allen Hurns signed with the Cowboys this offseason to be their de facto No. 1 receiver following Dez Bryant’s release, and at this point of their respective careers, I think the 26-year-old is a clear upgrade over the veteran. While Dez was a throw-it-up, limited-separation option, Hurns is an on-the-ground target that will win with his routes and craftiness—which is a much better fit for Prescott, who likes to scan the defense and hit the open man rather than toss up 50-50 balls. There might be fantasy wideouts with more upside, but Hurns is worth considering when you reach the double-digit rounds of your draft.

Terrance Williams should have the same role that he did a season ago, which led to a career-low 10.7 yards per reception on a career-high 53 receptions, none of which resulted in a touchdown. Entering his age-29 campaign, Williams is highly unlikely to suddenly become a fantasy factor and is only worth rostering as a one-week, desperation option in deeper leagues.

Cole Beasley will also have his usual role in the slot, but his numbers in 2017 (36/314/4 line) took a huge step back from two years ago when he posted 75 receptions for 833 and five scores with Dak Prescott under center. Even if the two connect like they did in 2016 (which I would bet against), Beasley wouldn’t be anything more than a high-floor FLEX option in PPR leagues. He should only be considered a deep-league, PPR option to start the season.

It’s possible that third-round pick Michael Gallup forms a connection with Dak in training camp and becomes a significant factor early in his career, but I wouldn’t count on it. Gallup might need some time to develop at the next level, and Dallas seems to have their starting trio in place with Hurns, Williams, and Beasley. I think the rookie is only worth drafting late in 12-team leagues.

The biggest loss for the Cowboys from 2017 to 2018 will probably be Jason Witten, and that’s mostly because his leadership will no longer be in the building. However, the new Monday Night Football commentator was very clearly past his prime last season with a 63/560/5 line and a career-low 8.9 yards per reception; so now, there could be a four-way competition to replace the future Hall of Famer.

Entering his fourth NFL season, Geoff Swaim is a six-foot-four, 260-pound athlete with 4.7 speed and solid overall athleticism. He has just nine career catches, though, and even if he’s the starter, Swaim needs a big preseason to put himself on the fantasy radar.

It sounds like Swaim’s main competition atop the depth chart will be Blake Jarwin, an undrafted free agent from 2017. The soon-to-be 24-year-old (next week) only appeared in one game last year and didn’t catch a pass, but Dallas likes him enough that they promoted him to the active roster when Philadelphia tried signing him. Like Swaim, a big preseason is the only way for Jarwin to get on the fantasy radar.

2018 Fourth-round pick Dalton Schultz is also a candidate to replace Witten as the starter, and I think he will earn the role by the end of the season. That said, rookie tight ends rarely make a significant statistical impact (especially ones that were picked on Day 3), and Schultz totaled just 55 receptions for 555 yards and five scores at Stanford. He’s just a name to keep tabs on in dynasty leagues.

Rico Gathers got people excited last summer when he totaled seven receptions for 106 yards and two scores in the team’s first two preseason games, but a concussion forced him to miss the entire regular season, and it appears Gathers could be on the roster bubble. Strangely enough, I also think he would have the best chance to turn into a fantasy contributor this season, but it’s best to just avoid this group altogether.