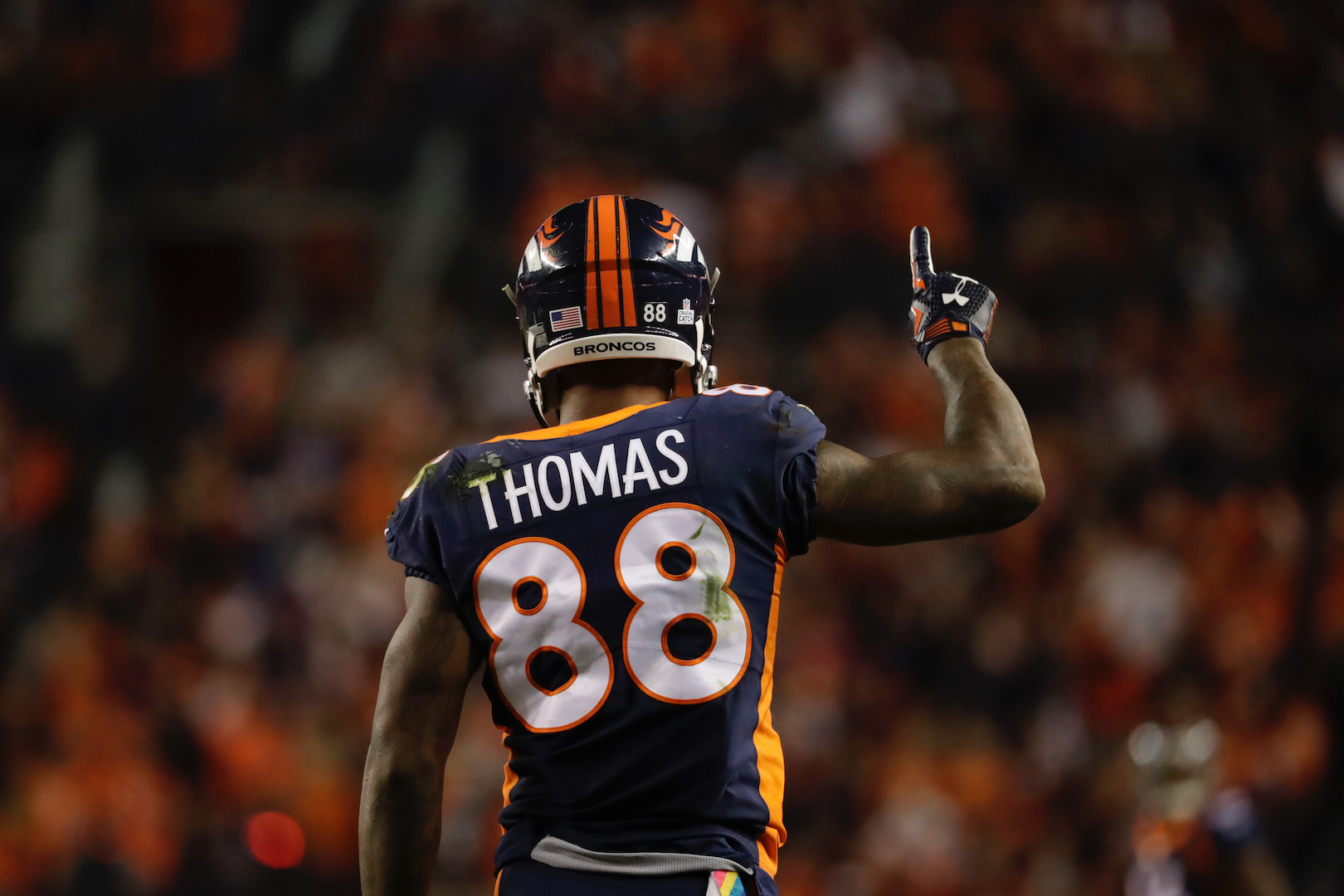 
Three rookies could be immediate contributors on Denver’s offense this season.

The Broncos moved quickly in free agency when they targeted and signed Case Keenum to a two-year deal worth $36 million (including $25 million guaranteed), and the franchise is hoping he will build on his success with the Vikings from a year ago; in Pat Shurmur’s offense, Keenum completed 67.8% of his passes for 3,547 yards and a 22:7 touchdown-interception ratio. And there are reasons to be optimistic about his outlook for the 2018 season.

For one, offensive coordinator Bill Musgrave’s system is somewhat similar to Pat Shurmur’s in regard to spread concepts, and it’s worth noting that the two coached together under Chip Kelly with the Eagles in 2014. Also, Denver goes four deep at receiver with veterans Demaryius Thomas and Emmanuel Sanders being joined by rookies Courtland Sutton and DaeSean Hamilton. Perhaps most importantly, Keenum doesn’t get enough credit for being a good NFL quarterback. All that said, the 30-year-old is probably in the QB22-QB28 range for me against a difficult schedule, and fantasy owners will need to pick their spots using Keenum as a streamer.

Royce Freeman was an extremely productive college runner with 5,621 rushing yards and 60 rushing touchdowns in four seasons at Oregon, and the Broncos made him the No. 71 pick in the 2018 NFL Draft to potentially come right in as the workhorse in Bill Musgrave’s offense. Or at least fantasy analysts believe that’s the case so far, as Freeman is currently ranked as the 56th overall player on Fantasy Pros expert consensus rankings, which is a hefty price to pay for a rookie that’s not even assured of a starting spot.

Even if he does start, play-caller Bill Musgrave has shown the willingness to rotate backs. I think Freeman is a solid player, but I would draft him two rounds later than he’s currently ranked. Of course, things could change if the rookie impresses in training camp and the preseason, but right now, Freeman looks to be shaking up as a risky early-mid round pick for fantasy owners.

If Denver’s third-round pick isn’t the starter to open the year, Devontae Booker will have had a strong summer showing as he enters his third NFL season. Two separate coaching staffs have talked up Booker in each of the past two years, but he’s battled injuries and struggled with efficiency on the ground with 911 yards on 253 attempts (3.6 YPC). Still, he’s shown flashes of three-down potential and looks to be a better value than Freeman at this point in Round 13. I think those spending a premium pick on the rookie would be wise to pair him with Booker if neither guy pulls away in the preseason.

De’Angelo Henderson could also work his way into a role as more of a compact runner that brings some power. The 2017 sixth-round pick out of Coastal Carolina won’t be worth drafting in standard leagues if he doesn’t see heavy action with the first unit next month, but Henderson should definitely be a name to keep in mind if the projected co-starters battle with injuries and/or ineffectiveness.

One of the more underappreciated players in football since entering the league at the start of the decade, Demaryius Thomas had five-straight seasons of 90+ receptions and 1,000+ yards before an 83/949/5 line in 2017. However, he played through hip issues at less than 100% with Trevor Siemian, Paxton Lynch, and Brock Osweiler under center, and now, DT is thought to be healthy for his age-30 campaign. I have him right in line with the conventional thinking as a low-end WR2 with a slight boost in PPR leagues.

Emmanuel Sanders has seen his numbers decline in each of the past four seasons, and he only scored in one game last year (twice in a Week 2 victory over the Cowboys), finishing with a 47/555/2 line in 12 games. Now 31, Sanders could be pushed by a couple rookies for snaps if he doesn’t return to his 1,000-yard form. Case Keenum will certainly help, and I don’t think the veteran will fall off completely, but I won’t draft Sanders until the double-digit rounds of fantasy drafts.

General manager John Elway doubled up at receiver and possibly got his starting duo of the future with second-rounder Courtland Sutton and fourth-rounder DaeSean Hamilton, and the two could be competing against each other for the final spot in three-wide sets this fall. I would think the top four options all mix-and-match enough to keep the veterans fresh and get the rookies on the field, but I’m not ready to commit to Sutton or Hamilton in redraft league for the 2018 season. In dynasty formats, the Penn State product is a really good value.

I think 2017 third-round pick Carlos Henderson will find himself fifth on the depth chart and might have to fight for a roster spot, while Jordan Taylor and Isaiah McKenzie are both highly unlikely to make a fantasy impact if they make the team.

I would be shocked if a tight end on Denver’s roster made a significant statistical impact in 2018, but the team has some intriguing long-term options to work with. Former Michigan star Jake Butt tore his ACL in the 2016 Orange Bowl and took a redshirt year as a rookie in 2017, but he was a potential Day 1 or Day 2 prospect that could turn into a really good starter if he gets back to pre-injury form. If I’m buying stock in a Broncos tight end for the future, Butt is an easy choice.

This year, though, Jeff Heuerman might be the better bet to produce since he will be more acclimated to NFL speed and the pro game in general. Through two seasons with Denver, the 25-year-old has averaged 15.7 yards per reception on 18 grabs, and he could—if he starts—turn into Case Keenum’s security blanket; but he’s off the radar for fantasy owners right now. Rounding out the group, fifth-round pick Troy Fumagalli reminded me a little bit of Zach Ertz coming out, but he’s just a prospect in dynasty leagues.