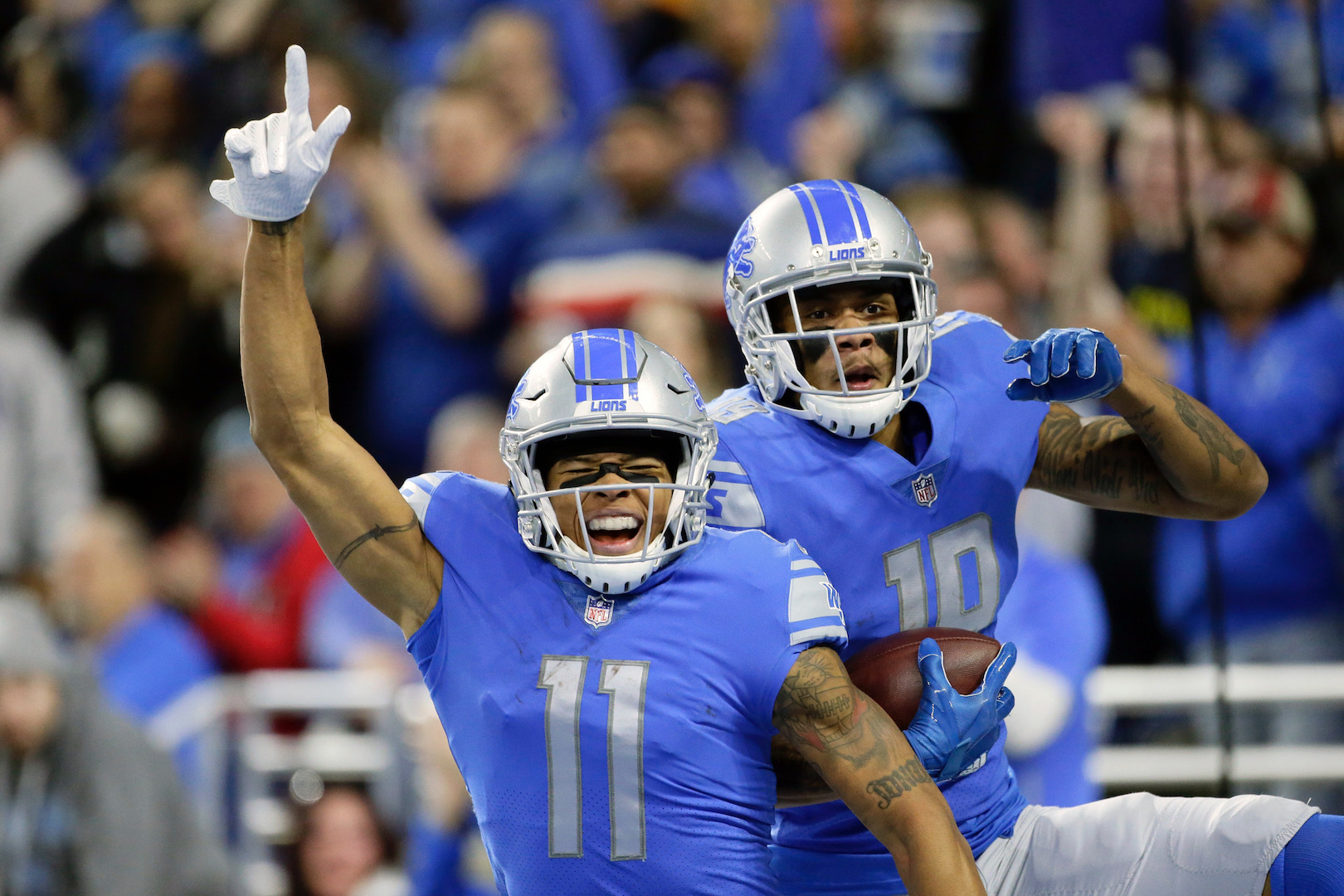 
Will the Lions passing attack continue to flourish in 2018? Or will a more balanced offense lead to a drop in production Detroit’s notable fantasy options?

In offensive coordinator Jim Bob Cooter’s pass-heavy attack last season, Matthew Stafford threw for 4,446 yards with a 29:10 touchdown-interception ratio and a career-high quarterback rating of 99.3. The numbers led to an overall QB8 finish, and Stafford has now been a top ten fantasy passer in six of the past seven seasons. However, if you take a deeper look into last year’s numbers, I think they were a little misleading, as Stafford only had four games with more than 17 fantasy points, and I like to have more upside at the position than Detroit’s quarterback provided in 2017.

To compare, all top-14 fantasy quarterbacks from a year ago had more games with 18+ fantasy points than Stafford’s four—Russell Wilson (11), Cam Newton (7), Tom Brady (6), Alex Smith (6), Carson Wentz (9), Philip Rivers, (6), Kirk Cousins (7), Drew Brees (6), Dak Prescott (6), Jared Goff (7), Blake Bortles (6), and Case Keenum (5)—except for Ben Roethlisberger (4), who sat out Week 17 but was on fire down the stretch. There’s something to be said for Stafford’s consistency, but I will likely have him in the QB12-QB15 range rather than the low-end QB1 he’s currently being drafted as, especially because new head coach Matt Patricia will want a more balanced offense in 2018 after the former No. 1 pick was fourth in the league in pass attempts last season.

The Lions traded up in the second round to select Auburn running back Kerryon Johnson earlier this year, and he is the early favorite to lead a crowded backfield to start the season. Johnson was one of my favorite prospects in this year’s class as a patient, tough runner with a style in the mold of David Johnson and Le’Veon Bell, but all indications are that Detroit’s running back rotation is going to be unforgiving to fantasy owners with a Belichick-like weekly game plan dependent on the matchup. In rookie drafts, I think Johnson is worth the second pick behind Saquon Barkley, but he is undoubtedly riskier in redraft leagues. That said, he is still a really good value in Round 10.

LeGarrette Blount will be the biggest obstacle to a breakout for the rookie, as he is coming off a solid season with the Eagles (766 yards, 4.4 YPC), and he saved his best for last with 14 carries for 90 yards and a score in Super Bowl LII. Entering his age-31 campaign, Blount looks to have quite a bit left in the tank, but at this point, Johnson is the superior player in my opinion; and like Johnson, the veteran could have some games with five carries and some games with 15 carries. I have Blount as a borderline top-150 player with room to move up with a strong summer.

If there’s a running back for the Lions with a stable role heading into the 2018 season, it’s Theo Riddick. The 27-year-old has only averaged 3.4 yards per carry in his career (and hasn’t had a season with at least 4.0 YPC), but he has 186 receptions over the past three years under Jim Bob Cooter’s direction. However, 80 catches came in 2015, and he might never return to that level if Detroit relies more on the running game as I expect. Riddick is probably just a decent FLEX option in PPR leagues, and there are much better late-round targets in standard leagues.

I pegged Ameer Abdullah for a breakout in 2017, but he struggled mightily, rushing 165 times for 552 yards (3.3 YPC) and four scores. The former second-round pick lost his starting job and was a healthy scratch for the start of the fantasy playoffs before receiving a handful of touches per game over the final three weeks of the season, and now, he isn’t even assured of a roster spot entering his fourth NFL season. There’s a chance Abdullah is traded at some point over the next couple months, but he’s just on the fringe of fantasy relevance with Detroit.

Marvin Jones is coming off a career-best 61/1,101/9 line as Matthew Stafford’s top perimeter target, and it was good enough to quietly finish as the overall WR5 in standard leagues. The 28-year-old has improved his numbers every year in the NFL, and over the past two seasons with the Lions, he’s averaged an impressive 17.5 yards per reception. However, even with Jim Bob Cooter still around, there is reason to be skeptical about Jones as a WR1 or even WR2 option because of the potential emergence of Kenny Golladay as an even bigger factor on an offense that wants to run the ball more. I currently have Jones outside my top 20 at the position.

With 90+ receptions in each of the past four years, Golden Tate has been one of the most consistent slot receivers in the league, and even in a lower volume attack, he should remain on the WR2 radar in PPR leagues this season. In standard leagues, though, I’m very surprised to see Tate is considered a potential top-50 pick, as his ceiling appears to be capped at mid-to-low WR2 status with a more likely outcome being a reliable FLEX territory. I won’t be considering the Notre Dame product until Round 8.

Kenny Golladay only needed 11 games to record nearly 500 yards (477) on just 28 receptions as a rookie, and it’s even more remarkable due to a midseason hamstring injury hampering him; because as we’ve seen, injuries can derail anyone, and they often wipe out basically an entire year for young players (just look at Mike Williams and John Ross). After starting the final five games of 2017, Golladay should be a staple in three-wide sets and is one of my favorite late-round fliers in fantasy drafts this summer.

2014 sixth-round pick T.J. Jones was a reliable contributor for Matthew Stafford last season with 30 receptions for 399 yards and a score, but he will be a clear No. 4 on the depth chart with Golladay set to be a full-time player. Entering his age-26 season, Jones is going to be a much better option for the Lions than he will be for fantasy owners, and he can be ignored to start the year.

Former No. 10 overall pick Eric Ebron didn’t live up to expectations in Detroit and was released earlier this year, so tight end looks like the biggest question mark for the Lions in 2018. That said, Luke Willson is a guy that could breakout in a new city after backing up Jimmy Graham and others in Seattle for five seasons. The Canadian-born tight end ran an unofficial 4.46 40-yard dash with a 38-inch vertical at his Pro Day in 2013, and he will be Matthew Stafford’s main receiving option at the position. I like Willson as an undervalued TE2 in deeper leagues.

Levine Toilolo also came over as a free agent in the offseason, but he is more of a blocker that will make a receiving impact on play-action passes. I think his fantasy value will probably be similar to what it was in Atlanta, where he totaled 386 yards and three scores over the past two years. 2017 fourth-round pick Michael Roberts only caught four passes for 46 yards as a rookie and will likely be third on the depth chart heading into his second season, but we’ll see what his role looks like in the preseason.