WOLF SPORTS ALERT There may be temporary login issues due to site maintenance. Thank you for your patience!
Home / frontfantasy / 2018 Fantasy Football Preview: Green Bay Packers 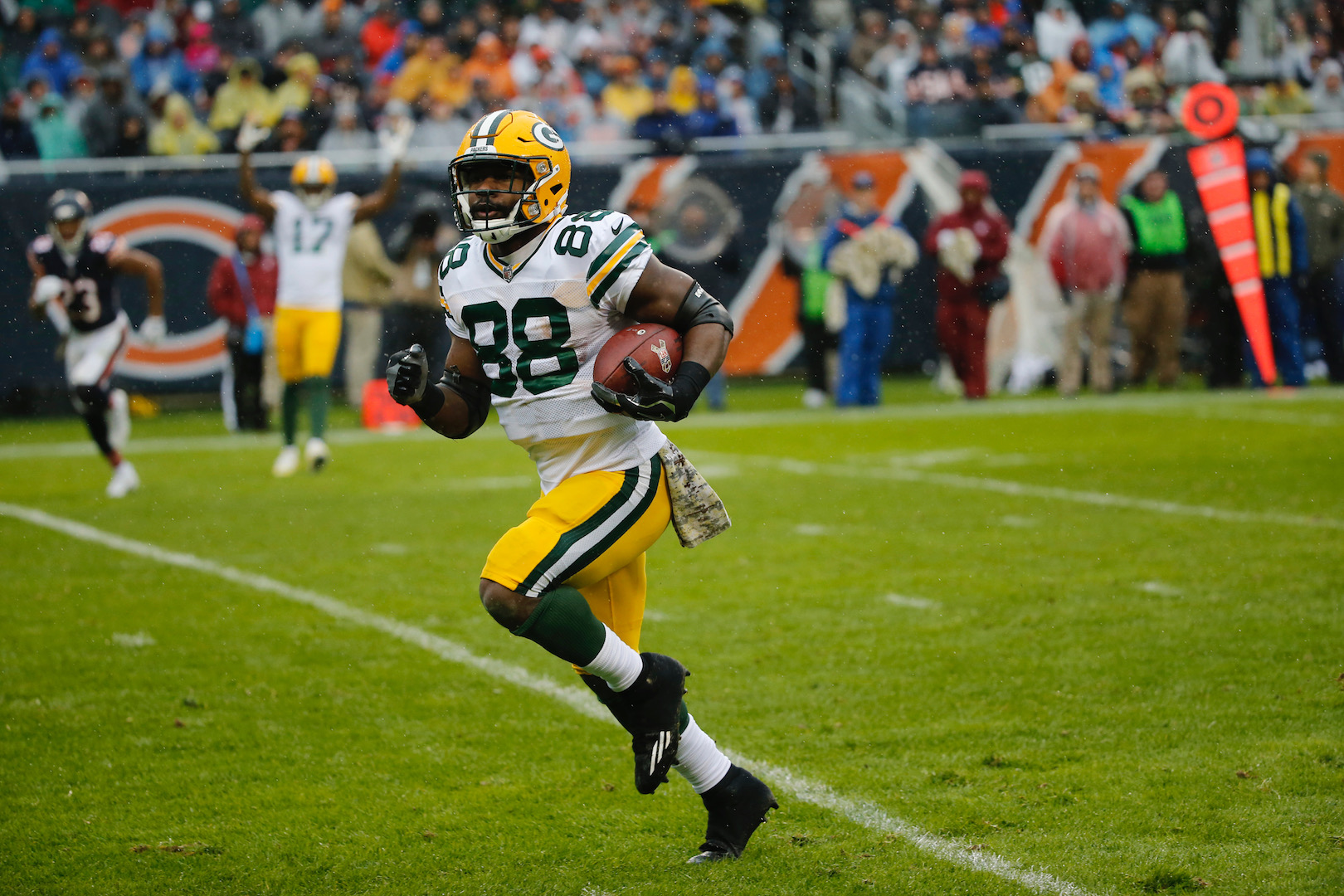 
What should fantasy owners make of the return of Aaron Rodgers and a three-man competition in the backfield for Green Bay?

I think Aaron Rodgers is going to be playing with a big-time edge in 2018 following a broken collarbone that derailed the Packers’ season a year ago, and he will try to pickup right where he left off in his last full campaign when he threw for 4,428 yards with a 40:7 touchdown-interception ratio. For his career, Rodgers owns an out-of-this-world 313:78 touchdown-interception ratio and has thrown for at least 4,295 yards and 38 touchdowns in four of his past five healthy seasons. And it was a small sample size, but in seven starts last year, the dual-threat remained as effective as ever on the ground.

However, while I’m sure that Rodgers will be a high-end QB1 with enormous upside, I’m not sure that fantasy owners should spend a third-round pick on him for a few reasons. First of all, the last time Rodgers was without Jordy Nelson was in 2015, and it’s no coincidence that he looked human with just 3,821 yards and 31 touchdowns appearing in all 16 games; now, Nelson is gone and there are concerns behind Davante Adams in the receiving corps. Also, the superstar signal-caller turns 35 in December, and he doesn’t have a prototypical stand-in-the-pocket-and-pick-you-apart game similar to other aging passers. Finally, the position is absolutely loaded this summer with upwards of 20-25 quarterbacks potentially making a case for QB1 value.

All that said, I won’t reveal who is No. 1 until my rankings are released, but I have Rodgers right next to Tom Brady as the top two fantasy quarterbacks for 2018—I’m just not sure spending a premium pick on him is adequate value.

The pecking order in Green Bay’s backfield will be determined in August through training camp and preseason action, but Jamaal Williams is currently ranked most favorably among the group for most fantasy analysts. As a 22-year-old rookie, Williams rushed 153 times for 556 yards (3.6 YPC) and four touchdowns, also adding 25 receptions for 262 yards and another two scores while excelling in pass protection. The 2017 fourth-rounder is the most powerful option for the Packers at running back, but his late Round 8 price tag could be hefty without knowing he’s the starter.

Aaron Jones is right behind or perhaps slightly ahead of Williams according to most outlets, but he will be unable to make an impact over the first two weeks of the season due to a suspension. Jones has the burst that his fellow second-year back doesn’t, but he is shaping up as a very risky mid-round investment because even if he takes control of the backfield next month, two regular season games could leave him without a role come Week 3. And even after rushing 81 times for 448 yards (5.5 YPC) and four touchdowns last year, the 23-year-old also needs to improve in pass protection if he wants to stay on the field with Aaron Rodgers under center.

Of course, the return of the former NFL MVP will open up more lanes in the running game against softer boxes, so whoever leads the backfield will likely be a significant fantasy contributor. Almost everyone disagrees, but my money is currently on Ty Montgomery, who has rushed 151 times for 744 yards (4.9 YPC) and six touchdowns while also catching 82 passes for 657 yards and three scores so far in his career. Overall, I think the converted receiver is the team’s top running back with natural vision between the tackles and the ability to make defenses pay through the air. Montgomery is a great pick in Round 13 or Round 14 in my opinion.

The emergence of Davante Adams into a legitimate star was one of the biggest reasons that Green Bay felt they could release Jordy Nelson, and fantasy owners shouldn’t get caught up in the fact that the former second-round pick has yet to record a 1,000-yard season entering his fifth year in the league. As Rodgers’ No. 2 target in 2016, Adams caught 75 passes for 997 yards and 12 scores, and that was with Nelson going for a 97/1,257/14 line. He often got to beat up on lesser cornerbacks, but last year, that changed when Brett Hundley was the starter and looked to Adams as his top option, which led to a 74/885/10 line and a Pro Bowl appearance. I think he’s a borderline top-15 player and worth a pick in the second round of all formats.

I was definitely surprised when the Packers decided to keep Randall Cobb over Jordy earlier this year, but they are counting on health and a return to form from the dynamic slot receiver, who doesn’t turn 28 until the end of August. Cobb is only averaging 57 receptions for 642 yards and 4.5 touchdowns per season excluding his breakout 91/1,287/12 line in 2014, but I am expecting a bounce back if health cooperates. I like him over players that are ranked just above him in the same tier such as Emmanuel Sanders, Cooper Kupp, and Robby Anderson.

A lot of players probably wish they could be the No. 3 receiver in Green Bay, as having less focus from opposing defenses with Aaron Rodgers tossing passes is about as good as it gets. In 2018, Geronimo Allison looks to be the beneficiary. The former undrafted free agent is a lanky target at six-foot-three, but he runs unique routes to create space and has caught 35 passes for 455 yards and two scores through two years. I’m not drafting him in a 10-team league, but Allison should be one of the top waiver wire names to file away at the start of the season.

If someone challenges Geronimo for a starting spot alongside Adams and Cobb, I think it will be fourth-round pick J’Mon Moore. A big, physical target out of Missouri, the 23-year-old could have his development accelerated with Aaron Rodgers and head coach Mike McCarthy working with him. He’s not on the redraft radar yet, but I wouldn’t be surprised if Moore worked his way to FLEX value in 2018. I actually liked fellow rookie Equanimeous St. Brown more than Moore as a prospect, but he fell to the late sixth round and might not be polished enough to turn into a realistic 2018 option. In dynasty leagues, though, I would give St. Brown the edge over his new teammate.

The Packers signed Jimmy Graham to a three-year, $30 million deal this offseason, and the team is expecting big things out of him, particularly in the red zone. However, Aaron Rodgers has never been a quarterback that heavily targets tight ends, and Graham turns 32 in November. People will likely be disappointed if they draft the six-foot-seven target (who is currently going in the middle of Round 6) as if he will return to his peak numbers with New Orleans from 2011-2014. I would be more comfortable taking Graham in Round 9, so I probably won’t own the former All-Pro this season.

Long-time Jaguars tight end Marcedes Lewis also came to Green Bay as a free agent in the offseason, but he is now 34-years-old and will be mostly relied upon as a blocker. Besides a 10-touchdown season all the way back in 2010, Lewis has never caught more than five touchdowns in a season. He’s not a fantasy option, especially with Graham healthy. The same is true for Lance Kendricks, who caught just 18 passes for 203 yards and one touchdown in his first season with the Packers.