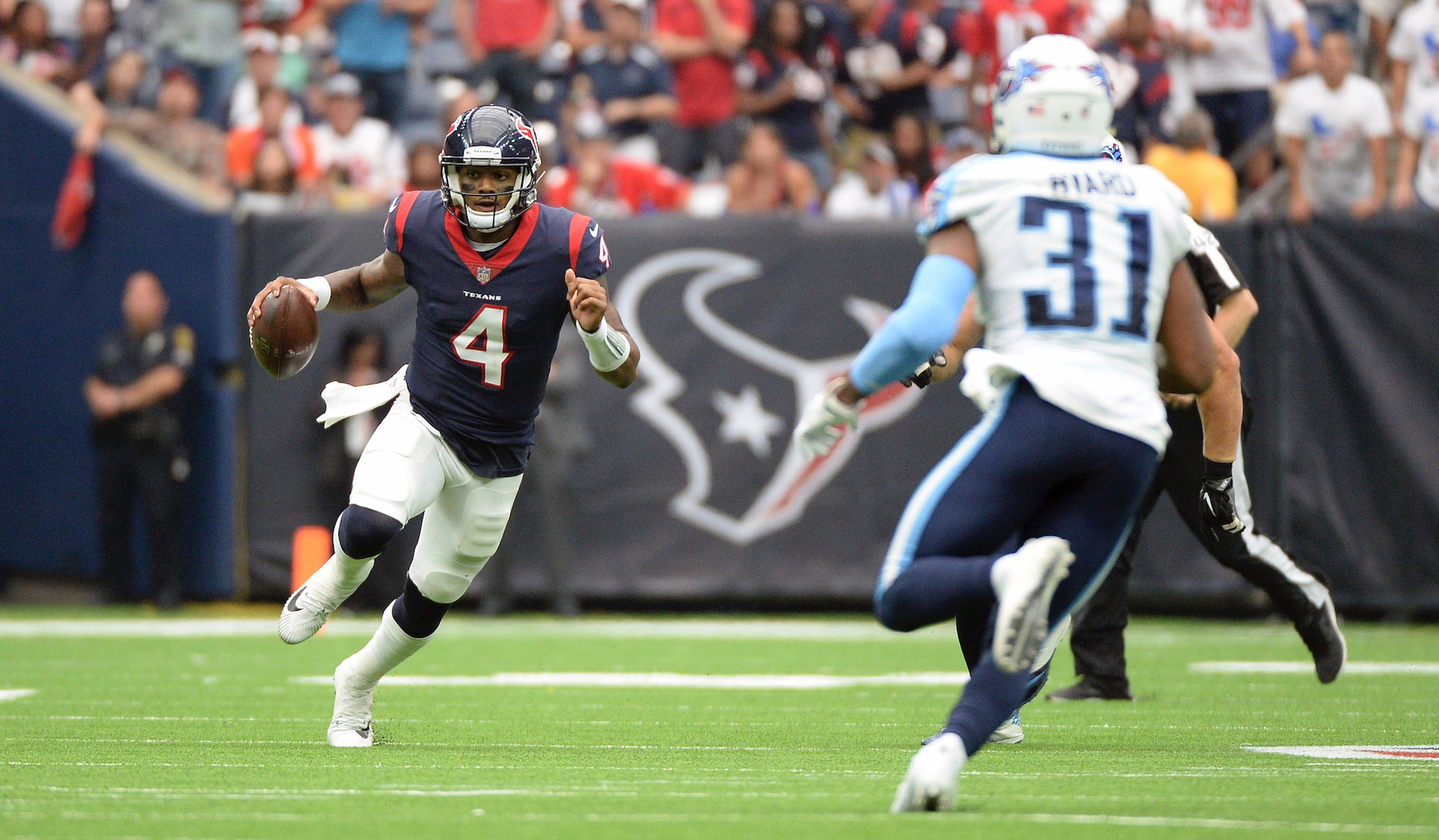 
Are fantasy owners making a mistake by thinking that Deshaun Watson and the Texans offense will pickup where they left off last year?

The NFL had no answer for Deshaun Watson last year, as the No. 12 pick in the 2017 NFL Draft scored 21 total touchdowns in just seven games (six starts) before his season was ended by a torn ACL suffered in practice. Overall, Watson completed 61.8% of his passes for 1,699 yards, 19 touchdowns, and eight interceptions, also adding 269 yards and two scores on the ground; and for a full season, those numbers would have been as follows: 3,883 passing yards, 43:18 touchdown-interception ratio, 615 rushing yards, 4.5 rushing touchdowns. I was higher on Watson than any of the “expert” draft analysts last season (he was my No. 2 player behind Myles Garrett), so I think he’s an absolute superstar-in-the-making for Houston.

However, it would probably be silly to expect the Clemson legend to pickup where he left off as a rookie. First of all, Watson’s eye-popping touchdown percentage (9.3%) would have one of the best in NFL history over a full season, and Peyton Manning (9.9% in 2004) is the only player since 1963 to have a better number. To compare, Tom Brady was at 8.7% in his record-breaking 2007 season, and Manning was at 8.3% for his record-breaking season in 2013. Also, defensive coordinators have had a full offseason to evaluate Watson and Bill O’Brien’s offense in general. And as I’ve stated, quarterback is simply stacked like never before, so spending a top-50 pick on Watson might not be great value. I have Deshaun as a top-five fantasy passer (especially considering the rushing production), but his Round 5 ADP is too rich for me.

Lamar Miller is coming off the worst season of his career with 238 carries for 888 yards (3.7 YPC) and three touchdowns, but his Round 6 ADP suggests that people are still high on him atop a thin depth chart (depending on health) in Bill O’Brien’s high-powered attack. I think that could be a mistake, as the Texans have arguably the worst offensive line in the NFL, and the same was true in 2017 when Miller only had one rush of 20+ yards (and it went for 21 yards). He’s still young at just 27, but I have Miller as a capped-ceiling FLEX and probably won’t be drafting him this summer. It wouldn’t be surprising if he wasn’t even the starter by October.

D’Onta Foreman’s fantasy value in 2018 will be heavily dependent on health, as a torn Achilles suffered last November could keep him out through training camp and potentially force him to begin the season on the PUP list. If so, there’s a good chance this is a lost season for the second-year back, and unfortunately, his future outlook could also be in question because of how serious Achilles injuries are for athletes. As a rookie, Foreman rushed 78 times for 327 yards (4.2 YPC) and looked on his way to taking over the backfield, but as his health currently stands, I think he’s just a late-round flier in fantasy drafts.

Over the final three weeks of the 2017 season, it was actually Alfred Blue that led Houston’s backfield with a combined 46 carries for 202 yards (4.4 YPC) and one touchdown. He isn’t assured of a roster spot after signing a one-year deal worth $880,000 and just $90,000 guaranteed, but Blue could work his way to FLEX consideration in deeper leagues if Miller struggles and Foreman has a slow recovery. 2016 fourth-round pick Tyler Ervin will also try to earn an offensive role, but he is coming off a torn patellar tendon and has just 16 total touches since entering the league. We’ll see what happens in camp, but the 24-year-old is unlikely to be a fantasy contributor, particularly in standard leagues.

Coming off a 96/1,378/13 line that earned him First-team All-Pro honors, DeAndre Hopkins is the reigning overall WR1 in standard leagues and is currently being drafted behind only Antonio Brown at the position. I think that’s understandable considering the Clemson product will be the focal point of the offense once again and should have another great season, but I have him lower than most as my No. 7 fantasy receiver in the late Round 2 or early Round 3 rather than his current first-round price tag. Despite not playing in Week 17 last year, Hopkins led the league in targets (176) with the Texans routinely getting into shootouts or trailing due to injuries on defense—and the unit should be healthy and possibly elite in 2018.

Will Fuller was basically unstoppable with Deshaun Watson in the lineup last season, as despite missing the first month of the season, the deep threat couldn’t be contained in October with lines of 4/35/2, 2/57/2, 2/62/1, and 5/125/2. That was all we got to see of him with Watson, though, and Fuller failed to score or go for 45+ yards for the remainder of the season. Fantasy owners clearly remember that magical month if Fuller’s early Round 8 ADP is any indication, but he is due for some big-time regression in the touchdown department, so be careful not to reach for him this summer.

Behind the dangerous duo of Hopkins and Fuller, Bruce Ellington looks like the frontrunner for the No. 3 receiver job after flashing in 11 games (six starts) for Bill O’Brien in 2017 before a hamstring injury ended his season. Turning 27-years-old in August, the slot receiver could be a usable FLEX option in deeper PPR leagues if he holds off competition in three-wide sets, but he will probably be a better real-life target than fantasy option.

Fourth-round pick Keke Coutee has a chance to immediately push Ellington, and I think he would have a better chance of providing fantasy value in 2018 than the veteran. Coutee could be an explosive slot with 4.43 wheels that will see a lot of favorable coverage with Hopkins and Fuller on the outside, and Deshaun Watson will be able to take advantage of it. I think Houston was the perfect spot for the rookie, but he isn’t worth selecting in redraft leagues.

Braxton Miller could be facing a battle to make the 53-man roster this season, but if he does make the team, it’s unlikely the former Ohio State quarterback has a significant role. Miller has averaged just 7.7 yards per reception through two seasons. Sammie Coates is only one year removed catching 21 passes for 435 yards (20.7 average) with the Steelers and is still just entering his age-25 campaign, but he isn’t on the fantasy radar.

The Texans have a handful of options at tight end, but 2016 undrafted free agent Stephen Anderson has the highest upside for the 2018 season. Last year, Anderson averaged 13.7 yards per reception in 15 games, finishing with 25 grabs for 342 yards and a score. However, while he might be the team’s best receiver at the position, he’s undoubtedly undersized by NFL standards at six-foot-two, 230 pounds, which limits the amount of snaps he will play in heavy personnel sets—in turn, limiting his fantasy appeal. I don’t think he’s worth considering this summer.

While Anderson might have the most upside in the group, Ryan Griffin should return as the starter and is more of an all-around player that should lead the position in snaps for Houston. Still, like his teammate, I don’t think Griffin is worth considering in fantasy drafts, and he might be asked to block more than anything thanks to a poor offensive line.

Finally, a pair of rookies in third-rounder Jordan Akins and sixth-rounder Jordan Thomas will round out the depth chart. I was surprised when the Texans took Akins on Day 2, but he averaged 14.2 yards per reception in his career at UCF; Thomas, on the other hand, played like a wide receiver on the outside at Mississippi State and has the physical traits that teams want to work with. Both guys can be ignored in redraft leagues.