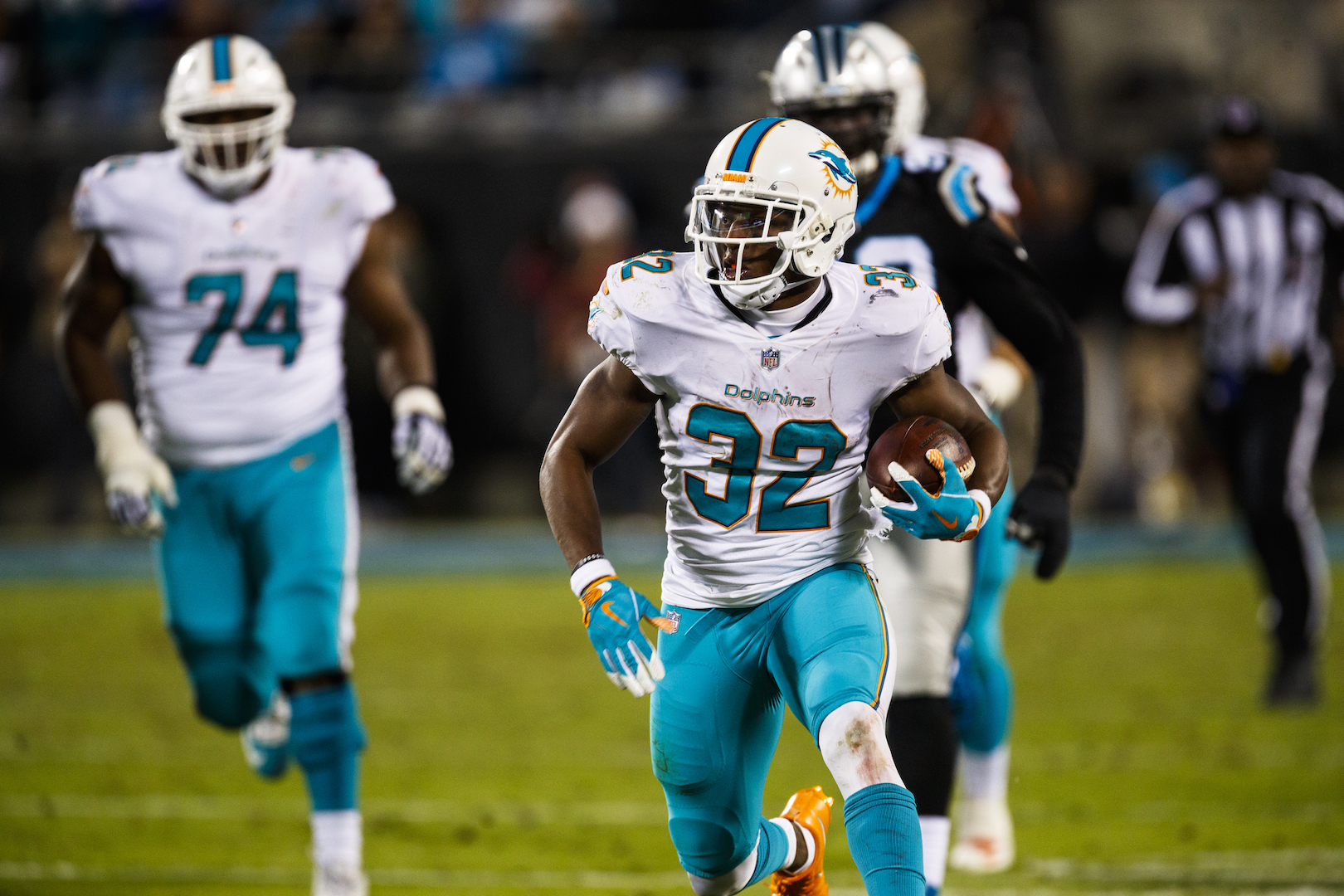 
Miami has a ton of potential fantasy options, but who should you target in 2018?

Turning 30-years-old next week, Ryan Tannehill should be fully healthy after missing all of the 2017 season due to a torn ACL that could be dated back to December of 2016 when he partially tore the ligament and missed the final three games of the regular season (plus the playoffs). That was the quarterback’s only year playing under Adam Gase, and he completed 67.1% of his passes for 2,995 yards, 19 touchdowns, and 12 interceptions in 13 games. Now that Tannehill should have the system mastered, I think the offense will be opened up to allow him to air it out more—and the personnel moves of Miami suggest just that.

Also, if they wanted to, the Dolphins could have easily moved up for a signal-caller in the 2018 NFL Draft, but the team clearly feels comfortable with Tannehill under center. Remember, the former No. 8 overall pick helped lead Miami to an 11-5 record two years ago before his injury, and I think he is extremely poised with good accuracy to all levels of the field. Somehow being drafted outside the top 32 at the position, Tannehill is a low-end QB2 for me and worth considering at the end of fantasy drafts, especially with a less-than-imposing schedule to begin the season.

An October trade that sent Jay Ajayi to the Eagles opened the door for Kenyan Drake to make an impact down the stretch, and he took advantage with 123 carries for 619 yards (5.0 YPC) and three touchdowns over the final nine weeks of the season, also adding 29 receptions for 232 yards and another score. Over his first two seasons in the league, the former third-round pick has now rushed 166 times for 823 yards (5.0 YPC) and five scores. However, the Dolphins signed Frank Gore and drafted Kalen Ballage this offseason, so the backfield could turn into a two- or three-headed monster with Drake having a “lightning” role similar to what he had at Alabama. I think he will lead the group and is worth an early-mid round pick in fantasy drafts, but I’m definitely concerned about the added competition for touches.

The timeless Frank Gore—now entering his age-35 campaign—is coming off his 12th season in a row with at least 1,200 yards from scrimmage, and it looks like the former Miami Hurricanes star will finish his football career where it began. Last year behind a weak offensive line on a four-win Colts team, Gore rushed 261 times for 961 yards (3.7 YPC) and three touchdowns, also adding 29 receptions for 245 yards and another score. The veteran could probably carry the load if he is asked to, but Gore is likely to serve as a pounding compliment to Drake. I think that could make him worth considering in all leagues as a late-round flier if he earns goal-line and short-yardage work in the preseason.

2018 fourth-round pick Kalen Ballage will get a ton of hype over the next several weeks, and it’s not hard to see why, as the Arizona State product is listed at six-foot-two, 237 pounds and has 4.46 wheels. Ballage never rushed for more than 669 yards in a season for the Sun Devils, though, and he might need time to adjust to an NFL scheme and the overall speed at the next level. Based purely on upside, the rookie is a borderline top-150 player for me, but I’m more excited about 2019 and beyond for Ballage. Perhaps his all-around game will get him on the field ahead of Gore, but if not, I think he and Drake could make up one of the league’s top one-two punches as soon as next season.

A high-ankle sprain derailed a potential breakout for him in 2017, but DeVante Parker still has a ton of potential entering his fourth season in the league. The former first-round pick caught 57 passes for 670 yards and just one score in 13 games last year, but before his injury, he went for lines of 4/85, 8/76/1, and 6/69 to start the season; also, Parker finished strong with at least five receptions and 63+ yards in each of the final three games of the year. With Jarvis Landry now in Cleveland, the monster receiver is the clear No. 1 option in the passing game for Adam Gase’s offense. Durability remains the biggest concern for Parker, but he should shatter his Round 10 ADP if he avoids all-too-common leg injuries.

Kenny Stills continued to operate as Miami’s deep threat in 2017, catching a respectable 58 passes for 847 yards and six touchdowns with the strong-armed Jay Cutler at quarterback. Two years ago with Ryan Tannehill under center, Stills caught 42 passes for 726 and nine scores, and he should have the same field-stretching role this fall. However, while the Dolphins lost Jarvis Landry, they added two running backs, two slot receivers, and a stud receiving tight end, all of which could lead to even more volatility in Stills’ game. I don’t think the 26-year-old is worth drafting in 10-team leagues.

The contracts suggest otherwise, but I think Danny Amendola (two years, $12 million) will be Miami’s main slot receiver with Albert Wilson (three years, $24 million) operating as more of a jack-of-all-trades option that can line up inside and outside while also being used on jet sweeps to get the ball in his hands. Amendola caught 61 passes for 659 yards and two scores last year in New England, but they usually keep his role in check until the postseason—and “Danny Playoff” exploded for lines of 11/112, 7/84/2, and 8/152 during the Pats’ Super Bowl run. Miami doesn’t have the same luxury, so there’s a chance Amendola has his best season yet at 32-years-old. Despite an ADP of 240th overall in standard leagues, I think the veteran is worth considering with a late-round pick, and PPR owners should consider him as early as Round 12; Wilson is probably off the fantasy radar with Amendola healthy, but we’ll see what happens in training camp.

Five-foot-six Jakeem Grant should have a minor offensive role, but his main contributions will come as a returner, so he is highly unlikely to make a fantasy impact in 2018. And if he makes the team, 2016 third-round pick Leonte Carroo is probably going to struggle to see the field in a loaded receiving corps after catching 10 passes for 98 yards and one score over his first two NFL seasons.

The No. 42 overall pick in the 2018 NFL Draft, Mike Gesicki is a six-foot-six, 247-pound athlete built in the mold of Jimmy Graham as an elite jump-ball winner and red-zone target. But like Graham in his prime, he’s not just limited to scoring territory potential; the Penn State star ran an insane 4.54 40-yard dash and jumped out of the building in Indy with a 41.5-inch vertical jump at the Combine. More importantly, Gesicki—who was a top-15 overall prospect for me—is a natural receiver and unafraid to make plays in traffic over the middle, which some people might not realize because he isn’t really an effective blocker. Rookie tight ends usually face a long learning curve, but I’m betting on Gesicki to beat his thanks to Adam Gase’s ability to create mismatches. I think he has double-digit touchdown potential as is worth a late-round selection for those waiting on tight end.

The trio of MarQueis Gray, A.J. Derby, and fourth-rounder Durham Smythe will probably handle blocking responsibilities more than anything else, but I think Derby has the brightest outlook as a potential fantasy option.