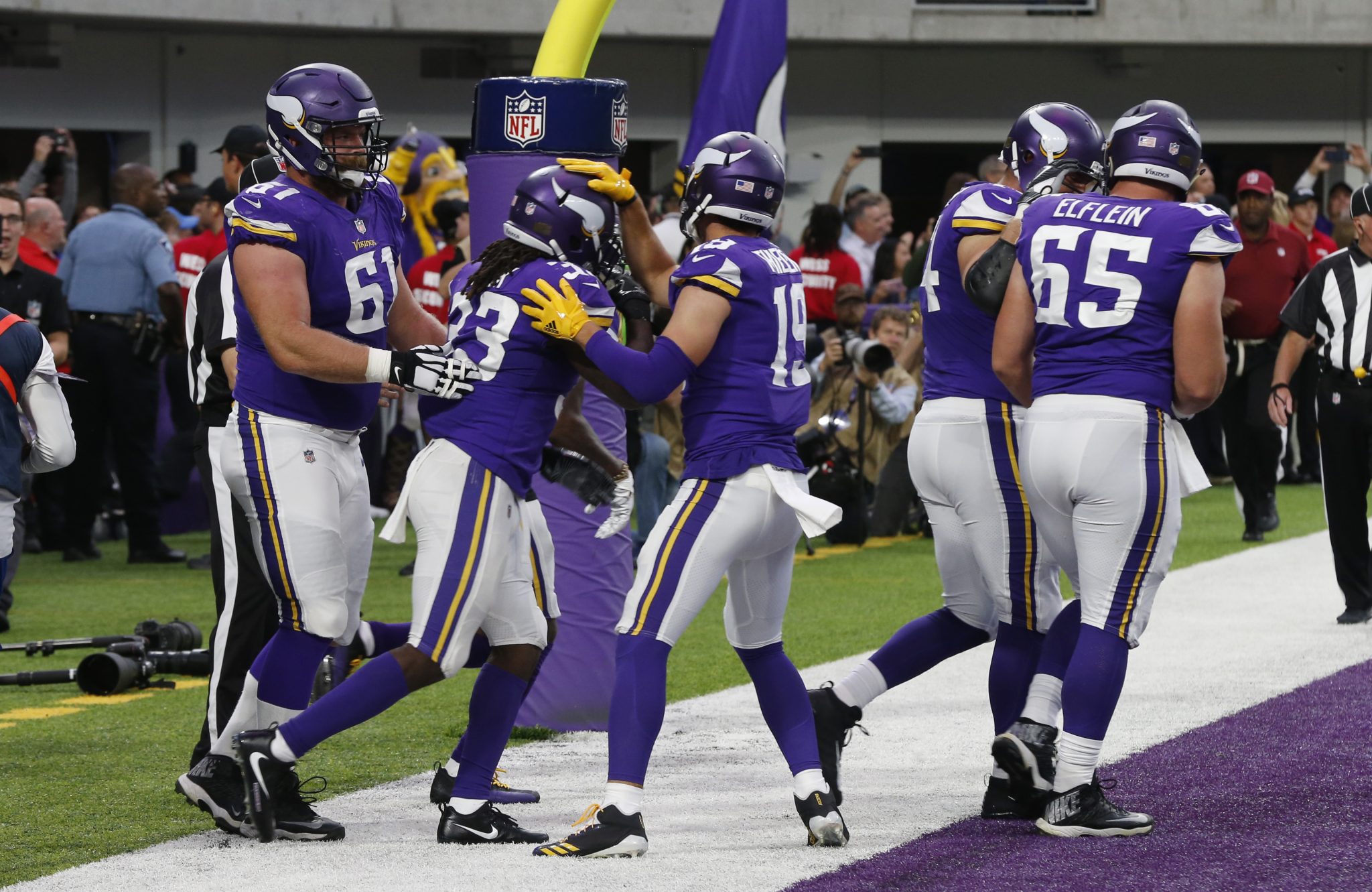 
A new quarterback will lead Minnesota’s talented offense in 2018, so what does that mean for their returning stars?

The Vikings signed Kirk Cousins to an unprecedented fully-guaranteed deal this offseason worth $84 million over three years, which says a lot considering Sam Bradford, Case Keenum, and Teddy Bridgewater were all familiar faces in the building and would have re-signed for much less. However, the franchise believes Cousins, who has thrown for 4,000+ yards and 25+ touchdowns in each of his three seasons as the clear starter in Washington, is the quarterback to take them to the next level. Last year with the Redskins, the soon-to-be 30-year-old (in August) threw for 4,039 yards with a 27:13 touchdown-interception ratio, also rushing 49 times for 179 yards and four scores on the ground.

But can we expect Cousins to step right in and dominate, especially considering former Vikings offensive coordinator Pat Shurmur is gone? New OC John DeFilippo had a ton of success developing Carson Wentz with the Eagles, but taking the jump from quarterbacks coach on a great offensive staff to play-caller in a new city will be a significant one. Also, Cousins will have a worse offensive line and could see fewer pass attempts on a better overall team that’s often playing ahead. Futhermore, it’s worth noting that Keenam had a magical, MVP-worthy season last year with Shurmur calling plays, and he only finished as the QB14.  I have Cousins as more of a low-end QB1 than the midrange QB1 he’s being drafted as, so his late Round 7 ADP is much too rich for me.

It didn’t take long for Dalvin Cook to breakout as a rookie in 2017, as he debuted on Monday Night Football with 22 attempts for 127 yards in a 29-19 victory over the Saints. Unfortunately, his season ended less than a month later due to a torn ACL suffered in Week 4, and Cook finished the season with 74 carries for 354 yards (4.8 YPC) and two scores, also adding 11 receptions for 90 yards through the air. Minnesota used the former Florida State star as their workhorse to start his career, but in 2018, he will likely be an explosive 1A option in the backfield to stay fresh coming off an injury. I won’t take him at his 14th overall ADP, but Cook showed enough last year to remain an excellent RB2 and worth considering in Round 3 for me.

Perhaps another reason that I’m slightly lower on Cook than most is because Latavius Murray is still around and should remain a key contributor on offense. He started slow due to offseason ankle surgery in 2017 (something that most fantasy “experts” writing him off didn’t seem to want to acknowledge), but Murray provided high-floor RB1/RB2 value in standard leagues after the rookie went down and he knocked the rust off with 175 carries for 745 yards (4.3 YPC) and eight touchdowns from Week 7 through the end of the season. Latavius will likely handle most of the short-yardage work this season as arguably the best goal-line back in the league, so he should have standalone FLEX value with RB1 upside if Cook goes down. I think Murray is an absolute steal being drafted as a borderline top-150 player.

Undrafted rookie Roc Thomas is expected to be the team’s No. 3 back and could potentially do some of the things that Jerick McKinnon did with the Vikings, but that would likely only come via an extended role due to injury. Thomas will be competing with veteran Mack Brown, who rushed eight times for 29 yards last year in Washington before joining the Vikings and not getting a touch in one active appearance. Neither is expected to make a significant impact this season.

Second-team All-Pro Adam Thielen took his 2017 breakout to another level with 91 receptions for 1,276 yards and four touchdowns last year, and he was as consistent as they came with at least five catches and 45+ yards in every game from September to November. It didn’t matter who was throwing passes, either, because almost all of his damage was done with Case Keenum under center, but Thielen also went for 9/157 in Sam Bradford’s lone healthy start—which is obviously a good sign with a new signal-caller coming in. Shurmur being gone is a bit worrisome, but I have the 27-year-old ranked right around his current ADP of 29th overall.

I’m a big believer in confidence for athletes (or anyone, for that matter) being one of the main factors when it comes to future success, and Stefon Diggs could parlay his all-time great play against the Saints in January to a huge year in 2018. Somewhat surprisingly, Diggs doesn’t have a 1,000-yard season under his belt, but he doesn’t turn 25 until after Thanksgiving, and I think his skillset could be a really good fit with Kirk Cousins. He is worth considering at his early Round 4 ADP and a strong bet to beat his 64/849/8 line from a season ago in the catches and yardage departments.

Slot receiver Kendall Wright caught 59 passes for 614 yards and one score as one of Mitchell Trubisky’s favorite targets last year with the Bears, but he joined Minnesota on a one-year deal this offseason and will look for a role behind Thielen and Diggs. I don’t think he will turn into a fantasy option outside of deeper PPR leagues.

2016 first-round pick Laquon Treadwell is apparently completely off the fantasy radar, but I think this is the perfect buy-low opportunity in dynasty leagues. After catching one pass for 15 yards as a rookie, Treadwell took a modest jump with 20 grabs for 200 yards in 2017, and he just turned 23 in June. He would need an injury to become a consistent fantasy option in redraft leagues, but I give the big-bodied receiver an edge for No. 3 duties in Minnesota’s offense.

Sam Bradford’s injury last season impacted Kyle Rudolph more than anyone, as after going for a career-best 83/840/7 line in 2016 with 11 plays of 20+ yards and 50 first-down conversations, Rudolph caught just 57 passes for 532 yards (though he did score eight touchdowns). However, the switch to Cousins at quarterback should be a positive for the six-foot-six tight end, who is still in his prime at 28-years-old. I’m on board with Rudolph as a top-eight option, but if he continues to be pushed up boards with an ADP in the middle of Round 7, I will likely miss out on him.

2016 sixth-round pick David Morgan II and former Oklahoma quarterback Blake Bell will both look to make the team and carve out a role, but neither will be a factor this season. There might only be one spot between the two of them, as fifth-round pick Tyler Conklin is a natural receiving tight end with good ball skills and underrated explosiveness, but he also won’t be on the fantasy radar as a rookie.