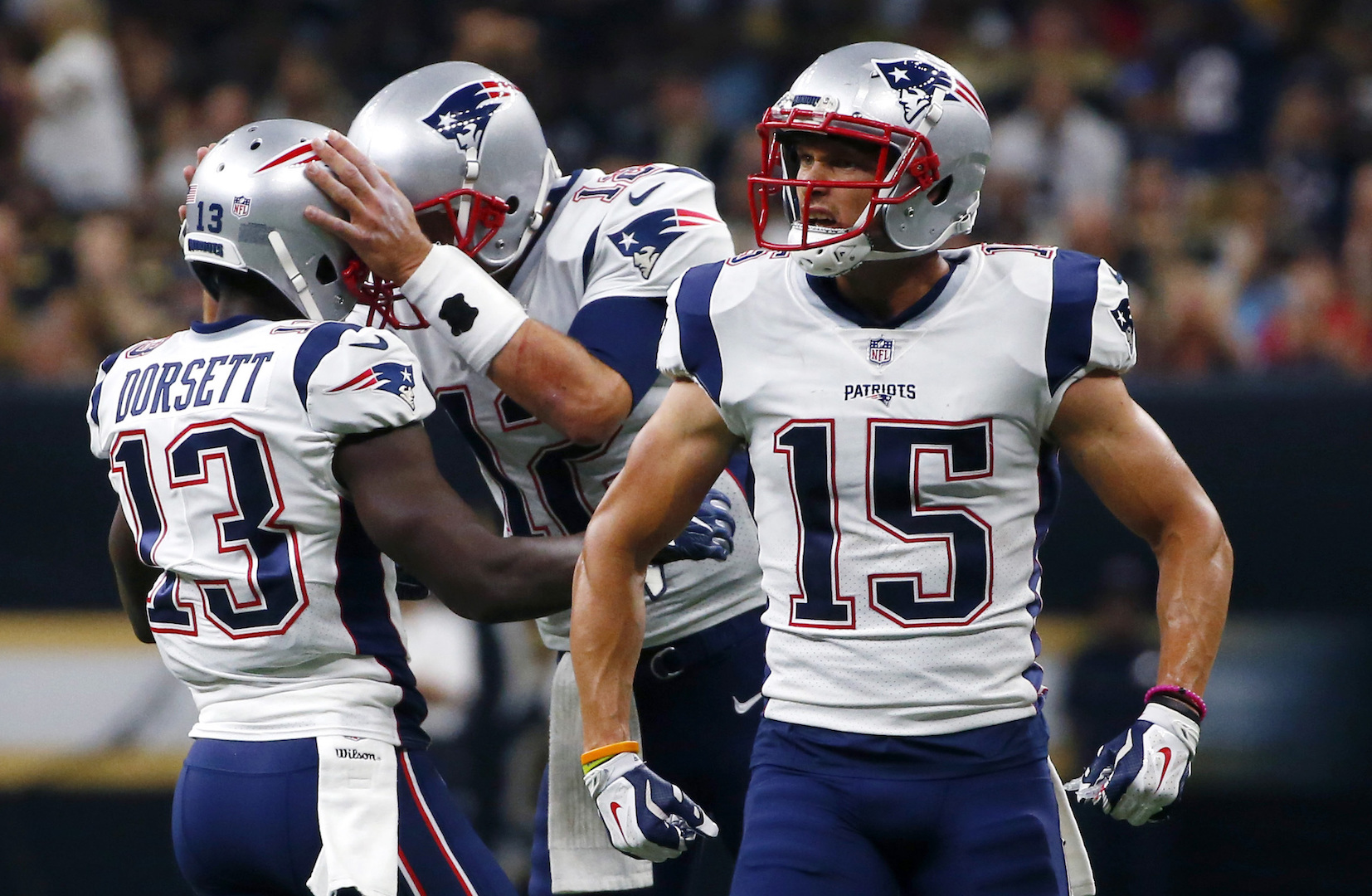 
New England’s offense showed they were as good as ever last season, but could fantasy owners be in for a nightmare with so many potential options on the team in 2018?

Entering his age-41 campaign, Tom Brady is still at the top of his game coming off an NFL MVP award and throwing for a Super Bowl record 505 yards with three touchdowns and zero interceptions against the Eagles in February. From a fantasy perspective, Brady finished as the overall QB3 last year, completing 66.3% of his passes for 4,577 yards and a 32:8 touchdown-interception ratio in the regular season. After unfounded retirement rumors swirled a few months ago, TB12 will be back as arguably the best player in football as he seeks his sixth Lombardi Trophy and third-straight Super Bowl appearance.

Brandin Cooks is gone and Julian Edelman is suspended for the first four games of the year, but New England will have a bolstered offensive line with standout tackle Trent Brown and versatile rookie Isaiah Wynn, both of whom are exceptional pass blockers and project to line up at left tackle and left guard, respectively. As he has shown throughout his career, it doesn’t really matter who Brady is throwing to if he’s given time to rip apart defenses, and I think that will be the case this year. The G.O.A.T. is somehow being drafted fourth at the position, but I think he and Aaron Rodgers are the clear top two options for 2018; and while another ring could lead to Brady deciding to retire, I believe he is serious about playing until he’s 45, which could mean five more years of elite production for dynasty owners, who have a chance to steal him in a trade.

Currently being drafted in the middle of Round 6 as the RB24, first-round pick Sony Michel could slide right into Dion Lewis’ 2017 role as the team’s lead runner, which led to 180 carries for 896 yards and six touchdowns. Lewis also caught 32 passes for 214 yards and three scores on his way to an RB11 finish in standard leagues. I have Michel—who has been compared to Alvin Kamara and Tevin Coleman—ranked in line with the consensus as if he will be a big factor all season, but he needs to take care of the ball to avoid losing touches in a deep running back group. Fortunately, the Georgia product holds up in pass protection, which obviously increases his three-down value. And remember, Michel is used to not needing a ton of touches to produce after splitting carries with Nick Chubb in college.

In his first season with the Patriots, Rex Burkhead rushed 64 times for 264 yards (4.1 YPC) and five touchdowns, also catching 30 passes for 254 yards and three more scores. Injuries impacted him at the beginning and end of the season, limiting the 28-year-old to ten games, but he was great from Week 12 to Week 15 with six total touchdowns and 13.8 fantasy points per game in standard leagues before a knee injury sidelined him until the AFC Championship Game. The Patriots are likely going to have a full-blown committee, but I think Burkhead is a tremendous value in Round 11 and will surely see his stock increase if he operates as the lead back in preseason action.

Last year, James White had least five receptions and/or 45 total yards in each of the first eight games of the season, but things changed after the bye with just 13 receptions in November and December, including just one game with more than 20 total yards. However, he could be in store for another strong start due to the Edelman suspension, and the Pats have an explosive enough offense that there might be room for three fantasy contributors in the same backfield. I have White as a borderline late-round pick in standard leagues with a substantial boost in PPR formats.

Jeremy Hill and Mike Gillislee will both compete for the big-back role in New England’s offense, but I don’t think either is worth targeting at the end of fantasy drafts as things currently stand. Hill—a former 1,000-yard rusher who scored 30 touchdowns in his first three years in the league—is still just 25 and carries double-digit touchdown upside, though, so fantasy owners should at least have him on their radar this summer.

30-year-old Chris Hogan looks like he will be the team’s No. 1 wide receiver to start the season, and now that Brandin Cooks is gone, I expect him to have more of a downfield role like he had two years ago with 38 receptions for 680 yards (17.9 AVG) and four touchdowns, compared to last year when he averaged just 12.9 yards per reception. Overall, Hogan played nine regular season games in 2017, catching 34 passes for 439 yards and five scores, with most of his damage coming from Week 2 to Week 5 with four-straight games of 60+ yards and at least one touchdown. If he returns to that form, Hogan will obviously blow past his Round 8 ADP.

After missing the entire 2017 season due to a torn ACL, Julian Edelman will have to wait until Week 5 to make his return because of his four-game suspension for violating the NFL’s policy on performance-enhancing substances. The age (32) is a concern, but Edelman relies more on toughness and chemistry with his quarterback than athletic ability. Fantasy owners need to decide if they can get by in September without him, but the clutch slot receiver should be a high-floor WR2 when he returns, particularly in PPR leagues.

Jordan Matthews started his career with 800+ yards in each of his first three seasons with the Eagles, but he struggled to stay healthy and make an impact in his lone season with the Bills following a trade during the 2017 preseason. Before he was placed on injured reserve with a knee injury in December, Matthews caught just 25 passes for 282 yards and one touchdown for Buffalo. Now, the 26-year-old will look to rejuvenate his career by catching passes from the best quarterback of all-time in New England. If Matthews is able to earn an early-season starting job, he will be worth considering as a late-round flier in all leagues.

An under-the-radar target for fantasy owners in both dynasty leagues and redraft leagues, Malcolm Mitchell missed the entire 2017 season with a knee injury that kept him on IR, but he surprised as a fourth-round pick in 2016 with 32 receptions for 401 yards and four touchdowns as a trusted target for Tom Brady. His status is a bit of a mystery, but Mitchell might have more upside than anyone other than Edelman or Hogan in 2018.

Veteran Kenny Britt also shouldn’t be discounted, but he needs to be focused if he wants to earn a role in a complex offensive system. Right now, he is just a name to file away, but Britt—who has a combination of size and speed that others on the depth chart don’t—is somehow younger than both aforementioned starters and won’t turn 30 until September.

2015 first-round pick Phillip Dorsett has struggled to earn consistent playing time with the Colts or Patriots to start his career, but he could theoretically take over for Cooks as a deep threat with 4.33 wheels. For what it’s worth, Dorsett didn’t really make a mistake in limited action for the Pats in 2017, catching 12 passes for 194 yards (16.2 average) in the regular season.

And finally, Cordarrelle Patterson, who caught 31 passes for 309 yards and rushed 13 times for 121 yards (9.3 YPC) last year with the Raiders, is just entering his age-27 campaign and could benefit from New England’s underneath passing attack. He will probably be a returner and core special teamer, but earlier this year, Patterson said on NFL Network that Bill Belichick told him “we’re going to make you the player you should be.” I wouldn’t count on it, but a significant role behind Hogan and Edelman is possible.

Retirement and trade rumors swirled around him this offseason, but Rob Gronkowski is back and should be as dominant as ever. Despite missing two games last season, the 29-year-old still finished as the top fantasy tight end after totaling 69 receptions for 1,084 yards and eight touchdowns, proving once again to be one of the biggest mismatches in football. Like clockwork, Gronk is the clear No. 1 player at his position and a virtual lock to finish with the most fantasy points at tight end if he appears in all 16 games.

Dwayne Allen should be a blocking compliment to Gronkowski once again, but Troy Niklas might actually be the guy to own if the oft-injured superstar goes down. While I like Allen, he only caught ten passes for 86 yards and one touchdown in his first season with the Patriots. Niklas, on the other hand, is a Gronk-like six-foot-six, 270 pounds with a huge catch radius and natural receiving ability, but he struggled with injuries and didn’t make much of an impact in Arizona. The 2014 second-round pick is an intriguing name in dynasty leagues.