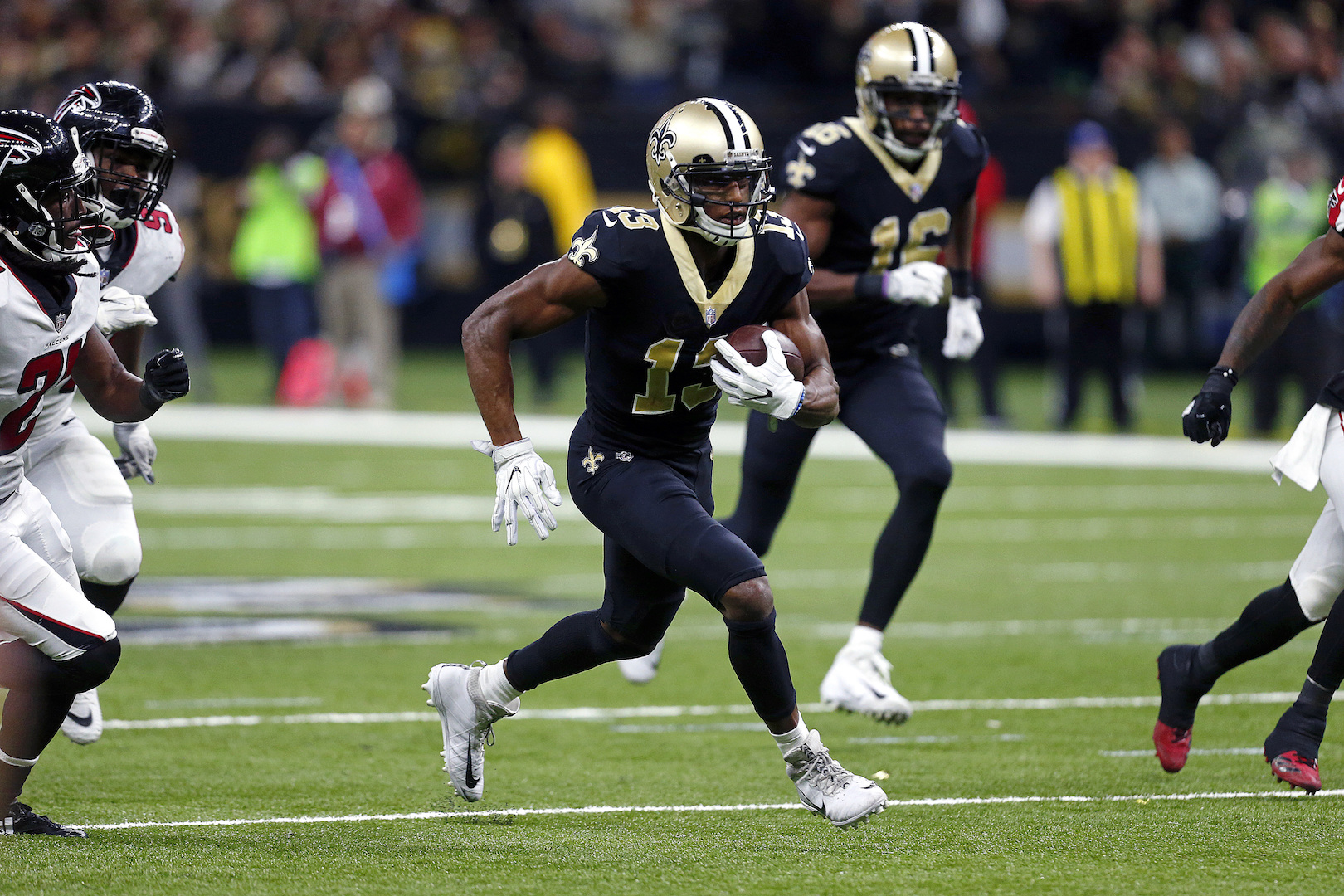 
Will the Saints rely more on the passing game in 2018 after a contained aerial attack last year?

In his age-38 season, Drew Brees completed an NFL-record 72.0% of his passes for 4,334 yards, 23 touchdowns, and eight interceptions while leading his team back to the playoffs. Unfortunately, some analysts look at the raw numbers in terms of yards and touchdowns—with both being the lowest since joining the Saints in 2005—as an indicator of a drop off in play from Brees, but that couldn’t be further from the truth. While the future Hall of Famer’s touchdown percentage (4.3%) was his lowest in 12 seasons with New Orleans, his interception percentage (1.5%) was actually the best of Brees’ illustrious career, and anyone who actually watched him play could see that he is still as accurate as they come.

Of course, it is about the raw numbers for fantasy owners, but the play of Brees is exactly why I think they will climb once again closer to the insane average stats for the rest of the decade (5,066 yards and 37.5 touchdowns). Also, the postseason performances against Carolina (376 yards, two touchdowns, one interception) and Minnesota (294 yards, three touchdowns, two interceptions) show that Brees can air it out 35-40 times per game if that’s what it takes to win. I have him right behind Carson Wentz in my quarterback rankings as a midrange QB1, and it’s worth noting that Brees gets two cupcake matchups at home versus the Bucs and Browns to start the season.

Reigning NFL Offensive Rookie of the Year Alvin Kamara took the league by storm on his way to a second-team All-Pro selection and a Pro Bowl appearance at 22-years-old last season. Kamara averaged a video-game like 7.73 yards per touch as a rookie, rushing 120 times for 728 yards (6.1 YPC) and eight touchdowns, also adding 81 receptions for 826 yards and five more scores, all of which combined was good enough to finish as the RB4 in standard leagues with at least eight fantasy points in every healthy game after Week 2. I don’t anticipate a huge increase in touches, but Kamara is a special player and should be a first-round pick in all formats. A legitimate case could be made for him at No. 1 overall in PPR leagues.

Even with Kamara performing like a human highlight reel, Mark Ingram had arguably his best season in the league with 230 carries for 1,124 yards (4.9 YPC) and 12 touchdowns in 2017. He also impressed as pass-catcher with career-highs of 58 catches and 416 yards for his third-straight season with 46+ receptions. The former Heisman winner isn’t going to play in September due to a four-game suspension, but I’m not concerned about Sean Payton putting him in the doghouse like others seem to be. Ingram should provide RB1/RB2 value in an explosive offense when he returns, which makes him a top-50 player and worth selecting at his late Round 5 ADP.

The favorite to compliment Alvin Kamara to start the season, Terrance West is one year removed from rushing 193 times for 774 yards (4.0 YPC) and five touchdowns with the Ravens. Personally, I probably won’t draft West because there are longer-term plays with better upside late in fantasy drafts, but he should provide early-season FLEX value for those that need a short-term option.

Today, the Saints signed Shane Vereen as a potential receiving option out of the backfield, but he will need to show something in training camp to stick around, and I highly, highly doubt that Sean Payton would give him more than a handful of snaps at the expense of his Kamara, even with Ingram out. I would actually prefer sixth-round pick Boston Scott, a five-foot-seven scat back from Louisiana Tech, in redraft leagues, but things could change during the preseason.

Michael Thomas followed up a 92/1,137/9 line as a rookie with 104 receptions for 1,245 yards and five touchdowns last season, which was good for an overall WR7 finish. An increase of yardage and touchdowns from Drew Brees like I expect would obviously benefit Thomas, and he could also be a bigger factor in the red zone early on with Ingram inactive. That said, I would take him in late Round 2 or early Round 3 rather than his top-15 ADP because he might not have the upside that other options do because of New Orleans’ spread-the-wealth attack. Still, Thomas should be drafted within the first three rounds of all fantasy drafts.

A gruesome knee injury forced Cameron Meredith to miss the entire 2017 season, but he’s thankfully healthy and ready to get his career back on track in a new city at just 25-years-old. Two years ago with the Bears, Meredith caught 66 passes for 888 yards and four touchdowns, and now he will be playing with one of the best signal-callers of all-time in an offense that doesn’t play favorites. His production might be a little tough to predict, but I think Meredith is worth drafting in standard 10-team leagues and could reach or surpass the numbers from his breakout 2016 season.

33-year-old deep threat Ted Ginn should remain involved as a downfield option, and he showed the best consistency of his career last season, catching 53 passes for 787 yards and four scores in his first year with New Orleans. The veteran only had 69 targets, though, and he looks like a clear candidate to regress some in terms of efficiency. He’s not a top-150 player for me, but as stated, the Saints get a soft schedule to start the season at home against Tampa Bay and Cleveland, so keep that in mind, particularly for deeper leagues.

The Saints drafted UCF’s Tre’Quan Smith in the third round of the 2018 NFL Draft, but I think he will need some time to develop, which he has in New Orleans. Smith is fast (4.49 40-yard dash) and explosive (37.5-inch vertical) in a long, six-foot-two frame, and he could be relied upon as a starter in three-wide sets as soon as 2019, which would potentially lead to fantasy value in Sean Payton’s offense. Consider the rookie a dynasty prospect for this season.

It seems like Brandon Coleman could be the odd man out with the acquisition of Cameron Meredith, but he didn’t carry much fantasy value anyway and could be ignored in drafts this summer. 2017 preseason star (with the Patriots) Austin Carr only appeared in one game and didn’t catch a pass in the regular season with New Orleans, but he will look to potentially work his way to a role in the slot.

Still a productive starter at 37-years-old, Benjamin Watson is coming off a 61/522/4 line with the Ravens after bouncing back from a missed 2016 season. This will be the veteran’s second stint with the Saints after he spent 2013-2015 with them, including career-bests across the board in the final season with 74 receptions for 825 yards and six touchdowns. There are guys with more upside in 10-team leagues, but I think Watson could be a solid TE2 and streaming option in 2018.