WOLF SPORTS ALERT There may be temporary bugs due to site performance upgrades. Thank you for your patience!
Home / frontfantasy / 2018 Fantasy Football Preview: New York Giants 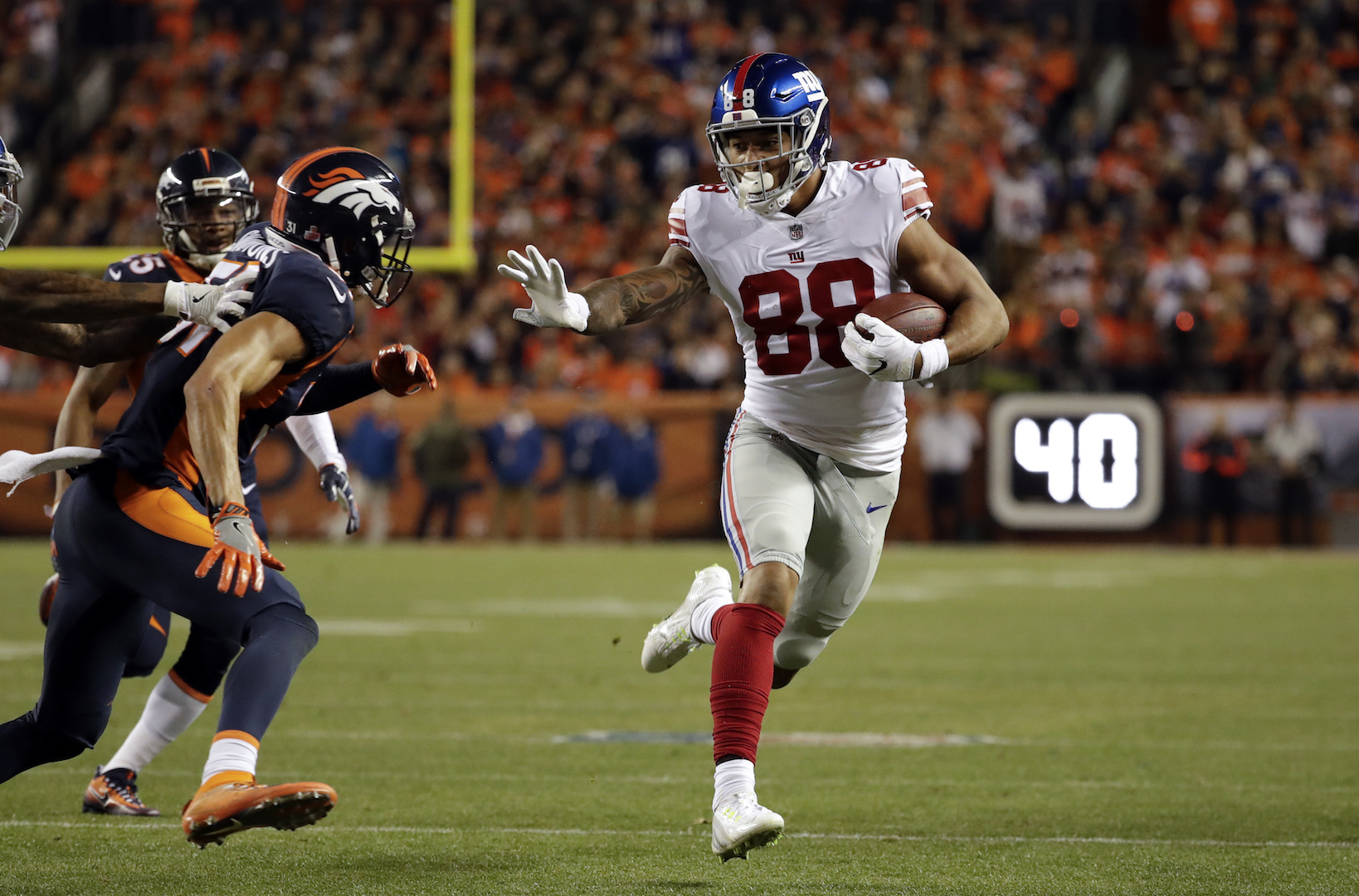 
Should fantasy owners count on Pat Shumur and Saquon Barkley to give a boost to Eli Manning and the rest of New York’s returning offensive players?

It looked like Eli Manning’s time with the Giants might have been coming to an end when former head coach Ben McAdoo benched him in December, but the two-time Super Bowl champion was quickly installed back as the starter under interim HC Steve Spagnuola, so all McAdoo really did was end Eli Manning’s streak of 210 consecutive starts, which is second in NFL history behind Brett Favre’s 297. Fortunately for Eli, things are now looking as promising as ever with former Vikings offensive coordinator Pat Shurmur taking over, especially after New York declined to spend a high pick on a quarterback of the future in the 2018 NFL Draft. So, can Manning—who is coming off a season where he completed 61.6% of his passes for 3,468 yards, 19 touchdowns, and 13 interceptions—return to fantasy relevancy at 37-years-old?

Last year with the Vikings, Shurmur coached Case Keenum and Sam Bradford to a combined QB9 finish, and I think the Giants have comparable skill-position talent with a superstar receiver, an explosive tight end, and a new offensive centerpiece at running back. Plus, they bolstered the line with moves made in free agency (Nate Solder, Patrick Omameh) and the draft (No. 34 pick Will Hernandez). Still, while I have Eli a couple spots higher than his ADP at the position, he isn’t close to QB1 territory and will likely settle in as a streamer this season because there are better players with more upside. It was obviously not all on him, but Manning failed to recognize the open man too often last year from what I saw. Also, fantasy owners need to be wary of the Week 1 matchup (v JAX) if they were considering him as an early-season option.

My scouting report on Saquon Barkley probably says all you need to know about him, as the Penn State product is a superhuman talent with legendary work ethic and character. Saquon ran a 4.40 40-yard dash with a 41-inch vertical at 233 pounds, and his tape is somehow even more impressive. At a young 21-years-old (he won’t turn 22 until a few days after Super Bowl LIII), Barkley should dominate the league for 8-10 years. To start his career, he will be the focal point of Pat Shurmur’s versatile offensive attack, which will feature the big-play threat as both a runner and receiver. Remember, Shurmur featured Dalvin Cook last year in Minnesota with touch totals of 25, 14, and 32 over the first three games of the season before a torn ACL in Week 4. I think Barkley should be the No. 1 pick in dynasty startups and needs to be a first-round pick in all redraft leagues.

Carolina’s all-time rushing leader Jonathan Stewart signed with the Giants on a two-year deal this offseason, but his role will be significantly scaled back from his time with the Panthers after the team drafted Barkley. Last season, the veteran rushed 198 times for 680 yards (3.4 YPC) and six touchdowns as the early-down compliment to Christian McCaffrey. Even if Saquon goes down, though, I don’t think Stewart would reach those numbers and would probably just be a touchdown-dependent FLEX as the short-yardage option in a committee.

I am more optimistic about the potential of Wayne Gallman as a change-of-pace and potential handcuff for New York. A fourth-round pick in the 2017 NFL Draft, Gallman rushed 111 times for 476 yards (4.3 YPC) as a rookie, also adding 34 receptions for 193 yards and one touchdown. I don’t know why the old coaching staff didn’t utilize him more in a weak backfield (he should’ve been the Week 1 starter in my opinion), but Gallman could really shine in his second season, even if it’s on just 5-8 touches per game. The former Clemson star is a top-150 player for me.

Coming off an ankle injury that limited him to four games last year, Odell Beckham Jr. was actually in the midst of his fourth-straight season with a decrease in yards per game (108.8 > 96.7 > 85.4 > 75.5), and his 12.1 yards per reception would have been the lowest of his career over a full season. That said, the only concern I have about OBJ this year is whether a contract dispute impacts his play, as putting up modest numbers early—and again, the Giants host Jacksonville in the season opener—could lead to frustration for an emotional player. But whether or not he gets a new deal, Odell will see a lot more single-high looks with Barkley in the backfield, so he should return to his 90-catch, 1,300-yard, 10-touchdown ways. I currently have Beckham ranked right at his ADP of No. 11 overall.

Sterling Shepard was in and out of the lineup last year due to injuries, but he finished with 59 receptions for 731 yards and two scores in 11 games as the team’s top option in the passing game. Now, he will be back in a secondary role with Beckham returning, which I think is a good thing for his fantasy outlook. Shepard is a perfect complimentary target in Shurmur’s offense, and he will have the benefit of facing the opponent’s second and third cornerback all season. The 24-year-old could be a steal at his late Round 10 ADP, which I think will go up once training camp and preseason action gets underway.

2014 second-round pick Cody Latimer didn’t meet expectations in Denver with just 35 receptions for 445 yards and three touchdowns over four seasons, but a competition for the No. 3 receiver job in New York could be the best possible opportunity for him with his career at a crossroads. That said, he would need to a) win the job, and b) probably need an injury to Shepard or Beckham to have fantasy relevancy, as he would currently be—at best—the fifth option on offense. The same is true of Roger Lewis, who I think might actually have the edge after building some chemistry with Eli Manning last year with a 36/416/2 line in 15 games, including eight starts.

Evan Engram impressed as a rookie by posting 64 receptions for 722 yards and six touchdowns on his way to a top-five finish at the position in standard leagues, but should fantasy owners be confident in targeting him this summer? Engram struggled with drops and benefitted from being the de facto No. 1 option on offense due to injuries last year, and now, he is going to be behind Beckham, Barkley, and Shepard in the pecking order. The 2017 first-round pick is a TE1 option, but there’s a zero-percent chance I draft him at his Round 6 ADP.

Another reason to be down on Engram is that he isn’t a great blocker at six-foot-three, 236 pounds, which could lead to more playing time for Rhett Ellison, who is an elite blocking tight end. The veteran set career-highs with 24 receptions for 235 yards and two touchdowns in his first season with the Giants, but even if he earns more snaps under Shurmur, it’s unlikely to lead to much of a statistical jump. Ellison can be ignored for fantasy purposes.