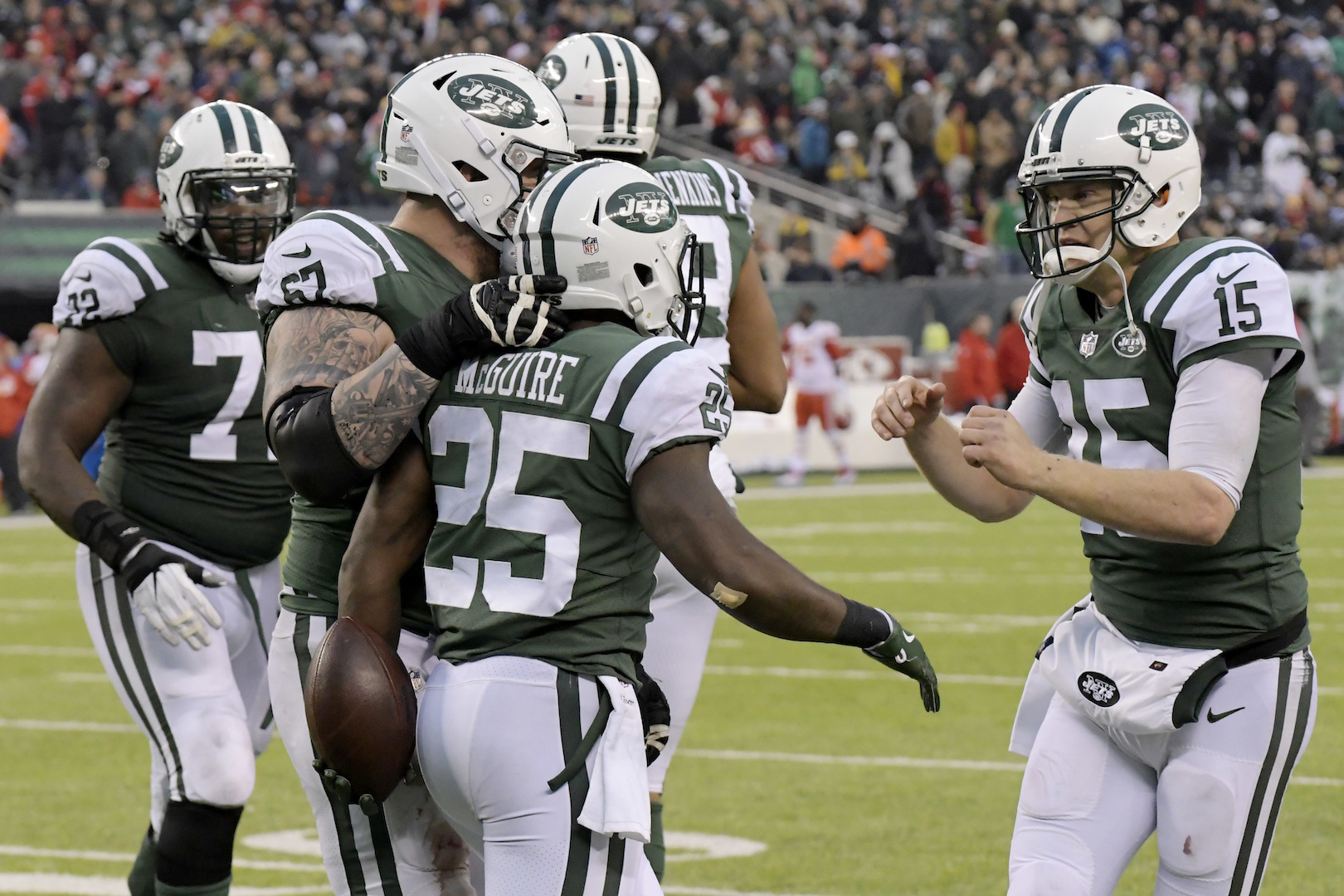 
The Jets will have a battle at quarterback, running back, wide receiver, and tight end this summer.

39-year-old Josh McCown is the favorite in a three-way competition for the Jets’ starting quarterback job, but he will undoubtedly be pushed in training camp by two promising (and younger) options. Last season, McCown completed 67.3% of his passes for 2,926 yards, 18 touchdowns, and nine interceptions over 13 starts before a broken hand ended his season. For the typical fantasy regular season (Week 1 to Week 13), that made McCown a borderline top-12 option, and more importantly, he led the Jets to a 5-7 record, which was remarkable considering many expected New York to be the worst team in football. I see no reason for his play to drop off if he’s the starter, but McCown isn’t worth drafting in 10- or 12-team leagues with the expectation that he eventually transitions to a mentoring backup role.

No. 3 overall pick Sam Darnold just turned 21 last month, but he is already a poised leader that throws with great anticipation and is very creative as a playmaker both in and out of the pocket. I am concerned about the turnovers carrying over to the next level, though, so even if Darnold opens the season as the starter, I think he will have too many growing pains to be a reliable fantasy option in 2018. However, in rookie drafts, I would take him as the third signal-caller behind Josh Allen and Lamar Jackson with the upside of a perennial 4,000-yard passer that can also make plays with his legs.

Teddy Bridgewater hasn’t seen meaningful game action since the 2015 playoffs, and that’s they only reason I can think of as to why other quarterback-needy teams weren’t more aggressive in trying to sign him in free agency. Still just 25-years-old, Bridgewater is auditioning next month for a starting job in 2019, but he could also be traded following an injury or might simply win the job in New York outright. Like McCown a season ago, there’s a chance Teddy B is able to put up respectable fantasy numbers if he is the starter, but we obviously need to see what happens in the preseason. He should probably be on the waiver wire to start the year no matter what.

After rushing 737 times for 3,118 yards (4.2 YPC) and 21 touchdowns in four years with the Browns, Isaiah Crowell signed a two-year deal with the Jets to hopefully be their starter. The mistake people made last year when Crowell was considered a top-40 pick was that they looked at the opportunity—he was a clear-cut early-down option behind a really good offensive line—instead of Crowell’s overall talent, which didn’t warrant a pick in the early/middle rounds. In 2018, he will be behind a worse offensive line with more competition for touches in a backfield that has a handful of worthy options. Despite that, it sounds like the Jets want to give Crowell a significant role, but fantasy owners need to ask themselves if they believe in his talent enough to be worth his Round 9 or Round 10 ADP. I’m avoiding him at that cost.

Bilal Powell put up career-highs across the board as a runner last season with 178 carries for 772 yards and five touchdowns, but his efficiency took a dip from his 5.5 yards per carry in 2016. Still, it was a respectable 4.3-YPC clip, and Powell hasn’t been below 4.0 YPC since his rookie year in 2011. It seems like the 29-year-old is a possible trade/release candidate every summer, but I think he will be back with a similar role, which could lead to FLEX value in both standard and PPR leagues. Again, let’s see what happens in August, but Powell is currently a top-150 player for me.

2017 sixth-round pick Elijah McGuire has been hyped a bit this offseason, most notably when running backs coach Stump Mitchell compared him to LaDainian Tomlinson last month by saying the 24-year-old “has the skillset to be a [Tomlinson], if he was given that opportunity.” As a rookie, McGuire rushed 88 times for 315 yards (3.6 YPC) and one touchdown, but he flashed an all-around game with 17 receptions for 177 yards (10.4 average) and one score. If he shows well in the preseason, the second-year back could put himself on the redraft radar despite a current ADP of 250th overall. I think he should be drafted in 12-team leagues.

Unless an injury hits or Bilal Powell is traded/released, former Seahawks standout Thomas Rawls will probably need the Jets to keep four running backs on the 53-man roster to make the team. Last year, Rawls rushed 58 times for just 157 yards (2.7 YPC) and no touchdowns, and it’s clear he just hasn’t been the same since an injury ended his rookie season in 2015 when he had 147 carries for 830 yards (5.6 YPC) and four scores as an undrafted free agent. Still, Rawls doesn’t turn 25 for a couple more weeks, and I think he will find the field with the Jets or someone else in 2018 if he stays healthy. He is worth a speculative add for dynasty owners in deeper leagues.

On a wide-open depth chart, perhaps sixth-rounder Trenton Cannon—an explosive small-school prospect with 4.40 wheels—is able earn a role as a rookie, but he’s just a name to file away for now. Fortunately, fantasy owners that wait until September to draft (which is a good idea to avoid preseason injuries) should have a much better grasp on the backfield for New York

Temple product Robby Anderson followed up a 42/587/2 line as a rookie with 63 receptions for 941 yards (14.9 average) and seven touchdowns last year, which was good for a top-20 finish at the position in standard leagues. Anderson showed great chemistry with Josh McCown in their first season together, and his fantasy value in 2018 could be heavily dependent on the veteran being under center, which I don’t think will be the case for 16 games. Also, there’s still a chance the 25-year-old is handed a short suspension for off-field issues. I have Anderson ranked a couple rounds later than his current ADP of Round 11. so I am highly unlikely to own him in 2018.

McCown was also a boon to Jermaine Kearse’s value last year, as in his first season with the Jets, he set career-highs with 65 receptions for 810 yards and five scores. Some believe Kearse will be pushed out of the starting lineup, but I don’t think that’s going to happen. He shouldn’t be drafted in 10-team leagues, but I currently have Kearse in the top-200 of my rankings and nearly 100 spots above his current ADP.

A neck injury forced Quincy Enunwa to miss the entire 2017 season, but he was a breakout fantasy option the last time we saw him with a 58/857/4 line two seasons ago. The 26-year-old is a physical slot receiver that has a chance to excel in offensive coordinator Jeremy Bates’ system no matter who plays quarterback, which could lead to FLEX value in all leagues. Still, he is a borderline top-200 player and probably better left on the waiver wire to start 2018.

I was seemingly the only one not on the Terrelle Pryor bandwagon last year, as he was a consensus third- or fourth-round pick but totaled just 20 receptions for 240 yards and one touchdown before being made a weekly inactive and eventually being placed on injured reserve. The former college quarterback just isn’t a polished or consistent enough as a wideout and is now 29, but fantasy owners apparently still love the upside he brings at six-foot-four because he’s being drafted ahead of Kearse and Enunwa. Pryor isn’t a lock to make the final roster.

It’s tough to picture a role for 2017 draftees ArDarius Stewart (third round) and Chad Hansen (fourth round), so neither is expected to turn into a fantasy contributor in 2018. Last year, Stewart caught six passes for 82 yards, while Hansen caught nine passes for 94 yards. I think the edge goes to Hansen in terms of both short- and long-term outlook as a wideout.

Another 2017 draft pick, fifth-rounder Jordan Leggett didn’t see the field as a rookie due to a knee injury that impacted him in training camp and forced him to get surgery in November, but the former Clemson standout could be the team’s starter at tight end in 2018. Leggett is a very capable target down the seam and was an underrated draft prospect in my opinion, so we’ll see if he can stay healthy this season.

While I’m less optimistic about the depth at running back and wide receiver, I really like all three options for the Jets are tight end. That includes the veteran of the group in former Raider Clive Walford, who was limited to 80 yards last year after going over 300 yards with three scores in each of his first two seasons. Still just 26, Walford could potentially breakout in a new city, but I’d be surprised if he turned into a fantasy option.

Rookie Chris Herndon reminds me of Charles Clay as a unique, running-back-like option at tight end, but like basically everyone on New York’s offense, fantasy owners should have a wait-and-see approach. Even if Herndon is able to beat out Leggett and Walford atop the depth chart, he probably won’t be on the fantasy radar as a rookie.