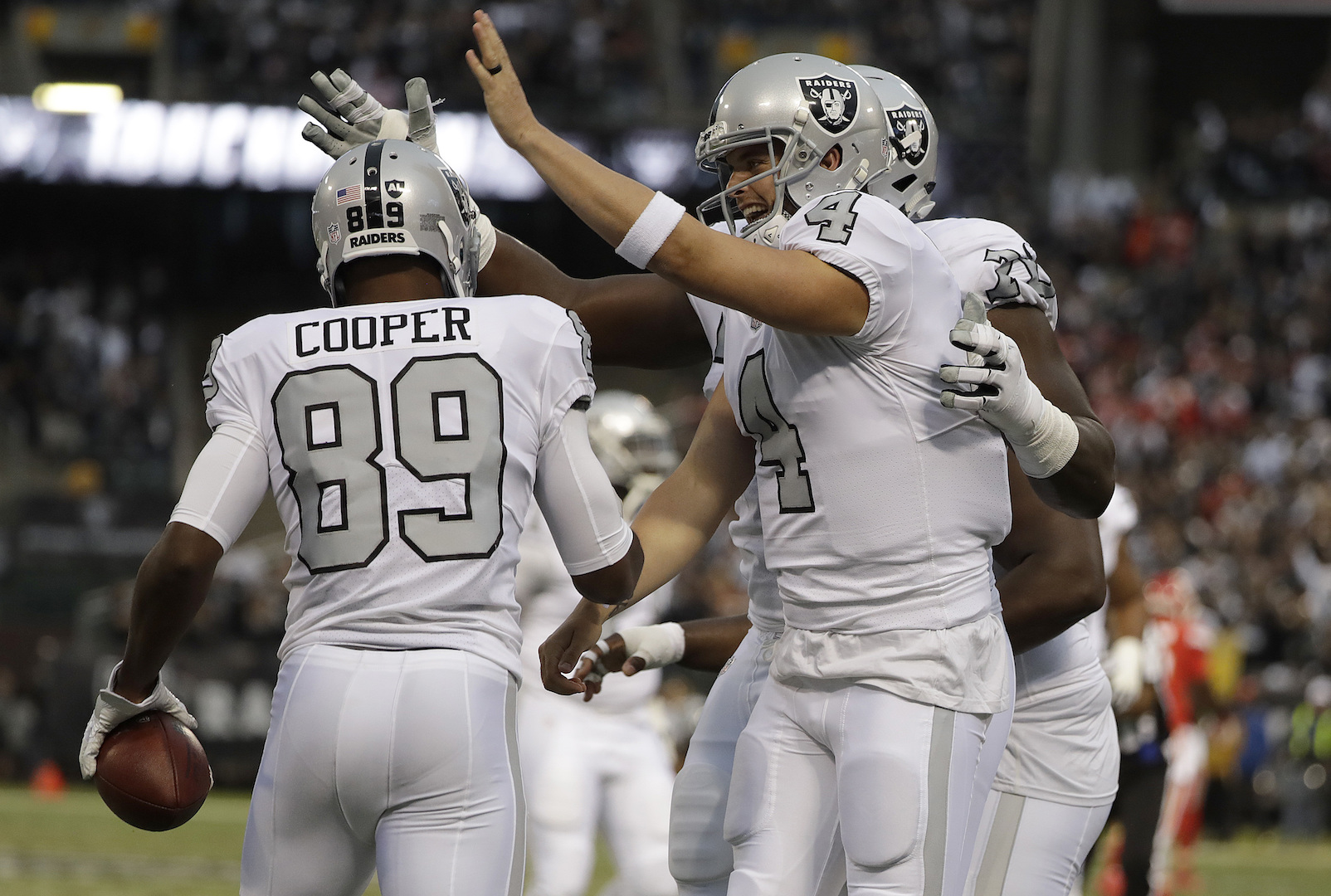 
Oakland has a mix of young and old offensive talent looking to either breakout or return to form with Jon Gruden back with the Silver and Black.

Two years ago, Derek Carr was a legitimate MVP candidate before a broken leg ended his season on Christmas Eve, but he still finished as a back-end QB1 with 3,937 yards and a 28:6 touchdown-interception ratio while leading Oakland to a 12-3 record. The Raiders just weren’t the same in 2017, though, and Carr completed 62.7% of his passes for 3,496 yards, 22 touchdowns, and 13 interceptions for an overall QB19 finish. However, he was clearly playing at less than full health with a back injury, and for whatever reason, I truly believe the anthem protests had a real impact on the focus of Oakland’s players from their Week 3 blowout loss in primetime (the weekend where much of the league protested) through the rest of the year.

Now, the Raiders should have a newfound focus under new/old head coach Jon Gruden, and I think he and Carr are the perfect fit together. People are down on the 27-year-old signal-caller from a fantasy perspective due to the unfounded concern that Gruden will have a “dinosaur” offense, but just look at the personnel moves—signing Jordy Nelson, trading for Martavis Bryant, and drafting athletic tackle Kolton Miller—the team made this offseason. I think “Chuckie” is going to let his quarterback air it out early and often, which makes Carr one of my favorite late-round picks at quarterback this summer.

In his first season with the Raiders and coming off a one-year retirement, Marshawn Lynch rushed 207 times for 891 yards (4.3 YPC) and seven touchdowns. He also caught 20 passes for 151 yards. Things didn’t start off great at all with just 4.6 fantasy points per game over the first half of the season, but Lynch turned it on down the stretch with 12.0 fantasy points per game, including at least 7 points in every contest. Entering his age-32 campaign, Lynch will look to carry the momentum of his 2017 finish into a big season in 2018 behind what remains one of the best offensive lines in football.

That said, Marshawn isn’t even guaranteed a starting job after Jon Gruden targeted and signed Doug Martin earlier this year in free agency. It’s been basically a tale of two careers for the 29-year-old, as he rushed for 1,400+ yards in 2012 and 2015, but has been held under 500 yards in each of his other four NFL seasons—including just 2.9 yards per carry in each of the past two years with Tampa Bay. Still, I think Martin—who according to Gruden “has not looked good [in Oakland], he has looked great”—will push for the lead role in camp. It’s also worth noting that Gruden pointed to what the Eagles did last year with multiple backs, so I expect a hot-hand approach and would much rather have Martin at his borderline top-150 ADP than Lynch at his mid-round ADP.

Behind them, third-year backs Jalen Richard and DeAndre Washington will look to both earn a role as change-of-pace options behind an elite offensive line. Richard rushed 56 times for 275 yards (4.9 YPC) and one touchdown last year, also adding 27 receptions for 256 yards and another score; but Washington wasn’t as successful with 57 attempts for 153 yards (2.7 YPC) and two scores to go along with 34 receptions for 197 yards and another touchdown through the air. Despite being undrafted, I have liked Richard—a career 5.5 YPC runner—more than the former fifth-rounder in Washington since they were rookies in 2016.

Over 32% of Amari Cooper’s fantasy points last season came in one Thursday Night Football game against the Chiefs in which he caught 11 passes for 210 yards and two touchdowns, but unfortunately for fantasy owners, that was basically the only week where his superstar potential was on display. The former first-round pick ended up with a career-worst 48/680/7 line on the year following 72/1,070/6 and 83/1,153/5 in each of his first two seasons, but I think he’s going to reach or surpass his 2015/2016 form this fall. Similar to what we saw against Kansas City last October, the new coaching staff will consistently put Cooper—who just turned 24 last month—in a position to make plays all over the formation. I think he could take the next step under Gruden and should be drafted within the first three rounds of fantasy drafts.

33-year-old Jordy Nelson will also be a boost to Cooper, as the former Green Bay great knows what it takes to reach the heights that his young teammate is hoping to reach. I think Nelson is going to provide much more than a veteran presence, though, and his crafty game is a tremendous fit with Derek Carr, particularly in the red zone. He’s not Aaron Rodgers, but Carr has one of the best back-shoulder balls in the game and should fall in love with Jordy as a target in key situations like he did with Michael Crabtree to start his career. I think Nelson has plenty left in the tank whether it’s in the slot or outside (he had six touchdowns in four games before Rodgers’ injury last year), and he’s a steal if he’s available in the double-digit rounds.

Rumors of a possible suspension swirled in June about Martavis Bryant, but we’ve heard nothing since, so I’m assuming he will be ready to go for his new team. The 26-year-old caught 50 passes for 603 yards and three touchdowns in his final season with the Steelers and lost his No. 2 receiver role to JuJu Smith-Schuster, but being the third wideout with Oakland will give him more opportunities than the same role on an offense that had Antonio Brown and Le’Veon Bell dominating touches. And the Raiders definitely have big plans for Martavis after sending a third-round pick to Pittsburgh for him. The suspension risk is always going to be there, but Bryant is worth a pick as early as Round 12 for me, which is more than 30 spots higher than his current ADP.

While the starters are locked in for Oakland, others will still vie for a short- and long-term role. Ryan Switzer will likely be used as a punt returner for the most part, but he is a name to keep an eye on in PPR leagues if Cooper, Nelson, or Bryant go down, as the North Carolina product could slide right into the slot and make an impact because of his toughness and ability to work in traffic underneath.

Switzer will likely be competing with Seth Roberts for No. 4 duties, as the 27-year-old has become a solid option for Derek Carr over the past three years. Last season, Roberts caught 43 passes for 455 yards and one touchdown, but he had five scores in each of his first two years in the league. Also, speedster Johnny Holton could remain involved as a field-stretching specialist after catching nine passes for 218 yards (24.2 average) and three touchdowns in 2017.

Finally, Marcell Ateman was a Day 2 prospect for me that went in the seventh round of the 2018 NFL Draft, but he would likely need a threat of injuries to have fantasy value as a rookie. Dynasty owners should know that the former Oklahoma State standout is a six-foot-five target that is a really good route-runner, and he has a bit of awkwardness to him that could work to his advantage similar to former first-rounder Michael Floyd. I’m interested to see what he does in preseason action.

Jared Cook finished as the TE15 last year with 54 receptions for 688 yards and two touchdowns, but he was a classic boom-or-bust option with most of his damage coming in four games—one in each month—of double-digit fantasy points; besides those games, he had 5 or fewer fantasy points for every other week of the 2017 season. I don’t think there are enough targets to go around for Cook to reach his numbers from last year, so the 31-year-old doesn’t make my top 20 at the position. Primarily blockers, Derek Carrier and Lee Smith can be ignored for fantasy purposes.