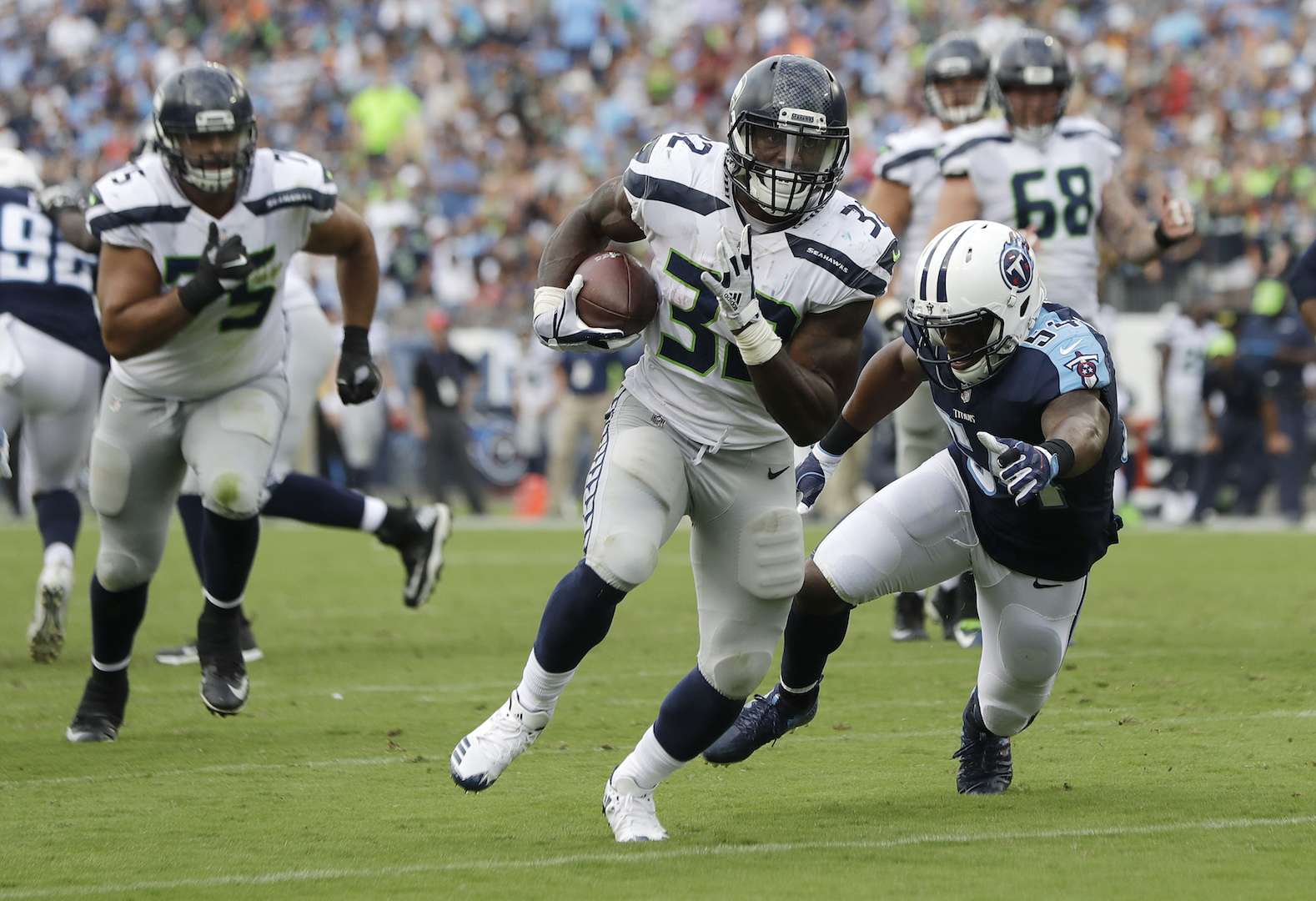 
As usual, competition will be the theme this summer for Seattle, but fantasy owners should have plenty of time to figure out who will provide value on offense.

Despite playing behind a bad offensive line with a nonexistent running game, Russell Wilson finished as not only the No. 1 fantasy quarterback, but also the No. 1 fantasy player last year. Wilson—who was fully healthy coming off an injured 2016 season—completed 61.3% of his passes for 3,983 yards, 34 touchdowns, and 11 interceptions, also adding 95 carries for 586 yards and three more scores on the ground. Plus, for the fifth-straight season, Seattle’s dual-threat saw an increase in pass attempts per game. But will that career-long trend continue this fall?

The Seahawks drafting a running back in the first round suggests that they want to get back to pounding the ball like they did earlier this decade, which would mean less volume for their quarterback. Also, the offense lost elite red-zone threat Jimmy Graham, so Wilson is almost certainly due for a touchdown regression after leading the league in 2017. I could understand his upside being too much to pass up—and I would love to take Wilson if he falls a round or two past his top-50 ADP—, but I think it’s smart to wait on basically all the signal-callers this year since it’s such a deep group. That said, there’s comfort in knowing he’s basically a surefire QB1 option, so it’s all about each owners’ personal preference.

Seattle surprised everyone earlier this year when they selected Rashaad Penny on Day 1 of the 2018 NFL Draft, but no matter what I or anyone else thought of the pick, Penny was undoubtedly productive for San Diego State, including 289 attempts for 2,248 yards (7.8 YPC) and 23 touchdowns as a senior, and he also had six receiving touchdowns and eight return touchdowns in his college career. The rookie is a tough, well-proportioned runner that the Seahawks are counting on to be one of their best players, but I lean towards Louis Riddick’s thoughts about this year’s rookie class. Even if he comes in running like a man possessed, the offensive line remains a concern after the Seahawks didn’t address the unit until the fifth round of the draft. For me, Penny is a late Round 6 pick (compared to a Round 4/Round 5 ADP) with room to fall this summer if he doesn’t establish himself as the clear lead back.

By the season opener last year, 2017 undrafted free agent Chris Carson worked his way atop the depth chart, and he was clearly Seattle’s best running back until an ankle injury ended his season in Week 4. Carson rushed 49 times for 208 yards (4.2 YPC) as a rookie, also catching seven passes for 59 yards and one touchdown. I think the former Oklahoma State standout is a similar talent to Rashaad Penny, so he’s an excellent late-round flier with high-end RB2 potential as a handcuff that should have the opportunity to win the starting job outright for the second year in a row.

Injuries led to a lost season for C.J. Prosise last year, as he appeared in just five games, rushing 11 times for 23 yards (2.1 YPC) and catching six passes for 87 yards. The 24-year-old hasn’t been able to stay healthy to start his career, and even though Penny and Carson are both bigger backs, Prosise might not have much of a role in 2018 if the team feels they can’t rely on him to stay on the field. He isn’t worth drafting in standard 10- or 12-team leagues.

Mike Davis and J.D. McKissic will both look to earn a roster spot for a franchise that is all about competition, but while the latter probably just needs to beat out Prosise (which is certainly possible), the former might need the team to keep four running backs. Barring a string of injuries, neither is expected to be a fantasy contributor in 2018.

A 75/991/8 line for Doug Baldwin in 2017 was good enough for a WR13 finish, but overall, it was a slight disappointment for a guy that went in the late second round or early third round of most fantasy drafts. Baldwin, who turns 30 in September, could benefit from more opportunities in scoring territory with Jimmy Graham gone, but as stated, I think the volume for the passing attack will go down. Plus, opposing defenses should look to eliminate Russell Wilson’s favorite target as the clear No. 1 option. Currently ranked as a top-25 player by the consensus, I wouldn’t take Baldwin until Round 6 or Round 7 in standard leagues.

Count me in the group that thought Brandon Marshall would have a really good season last year with the Giants, but he logged just 18 receptions for 154 yards (8.6 average) in five starts before an ankle injury ended his age-33 campaign. Still, while he isn’t guaranteed a roster spot in Seattle, I think the veteran still has some left in the tank and could establish himself as a factor in the red zone. And if he makes the team, Marshall is going to start, so fantasy owners should consider him at the end of drafts this summer.

From his rookie season to last year, Tyler Lockett has gone for lines of 51/664/6, 41/597/1, and 45/555/2 to start his career. He’s only missed one game over that span, but the Seahawks are hoping the former third-round pick can finally breakout as a receiver in 2018, especially now that 44 receptions, 703 yards, and 6 scores are missing from Paul Richardson alone after he signed with the Redskins earlier this year. If he earns the No. 2 role behind Doug Baldwin, Lockett has a good chance to reach his potential and should surpass his 182nd overall ADP as a volatile FLEX option.

There is also a chance that Jaron Brown is able to push for a role in three-wide sets, which would probably leave Brandon Marshall without a roster spot. Brown signed a two-year deal with Seattle after impressing with 31 receptions for 477 yards and four touchdowns last year with the Cardinals; and over the past two seasons, the 28-year-old has averaged 15.8 yards per catch in the desert. He will shoot up my rankings if Marshall is cut, but Brown would still probably only be worth drafting in 12-team leagues. Former Eagles receiver Marcus Johnson, who was acquired in the Michael Bennett trade, could also surprise in camp.

The tight end trio of Ed Dickson, 2016 third-round pick Nick Vannett, and rookie Will Dissly is unlikely to make a significant fantasy impact this season. Dickson is the veteran off the bunch and caught 30 passes for 437 yards and one score last year with the Panthers, while Vannett has totaled 15 receptions for 156 yards and a touchdown in two seasons. Dissly might actually earn the most playing time of the bunch because he is an elite blocker, but had a 21/289/2 receiving line as a senior for Washington.