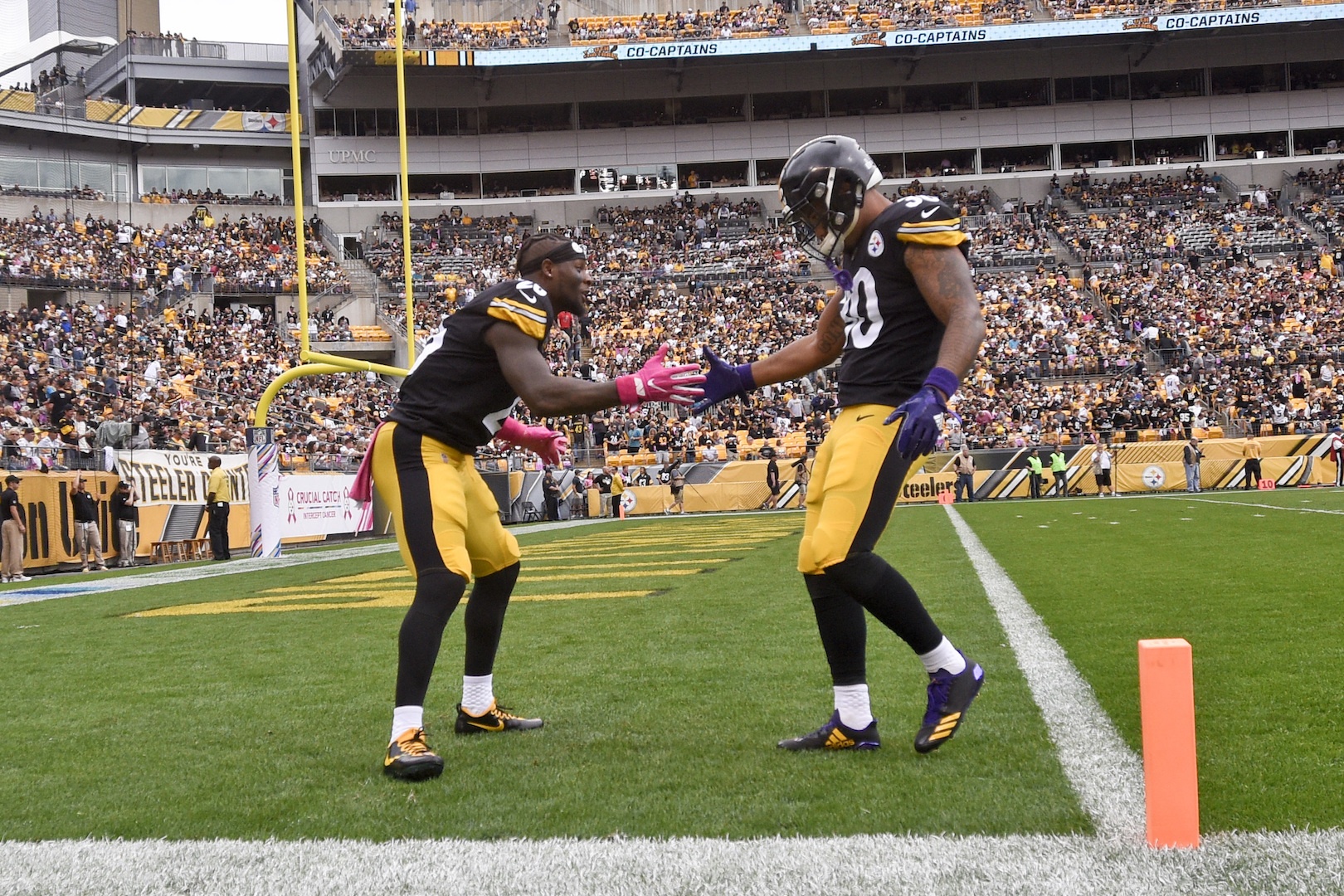 
As is the case every year, injuries will hit the NFL and put starters out of commission for a week, several weeks, or the entire season. But like real-life teams do, fantasy owners need to have a “next-man-up” mentality if they want to compete for a title come December.

To help you out, we have assembled a running back depth chart with values for the “handcuff” (if the starter goes down) and “longshot” (if the starter and immediate handcuff both go down). There is also a short description for all 32 teams to explain why we have players valued how they’re valued. And unlike other companies, we keep our word when we say these will be updated regularly. [Note: these are for standard (non-PPR) leagues, but there would be little to no change for PPR owners]

Fourth-round pick Chase Edmonds will rarely see the field with David Johnson dominating touches, but if DJ gets injured again, the rookie could shine in an extended role and would be worth a pickup in all leagues. Elijhaa Penny will also see little to no playing time barring an injury, but he would be a touchdown-dependent FLEX option if forced into action.

Tevin Coleman is more of a co-starter than true handcuff, but he has added value due to his league-winning upside if Devonta Freeman goes down. Ito Smith, who could be the compliment to Freeman in 2019 when Coleman hits free agency, is a good bet for FLEX value in Atlanta’s offense if the dynamic starters are both out.

Kenneth Dixon was a popular breakout candidate in 2017 before suffering a season-ending injury before training camp even began, and it opened the door for Alex Collins to rush for 973 yards and six scores. There’s a chance Dixon is able to have the same success if given an opportunity via injury, but Javorius Allen shouldn’t be counted out as the immediate handcuff, either.

The Bills are extremely reliant on LeSean McCoy, and Chris Ivory would likely be a huge drop off for fantasy owners looking to handcuff the former All-Pro. Ivory is probably only worth picking up after an injury to McCoy, while Cadet carries little value in standard-sized leagues as a low-upside receiving option.

C.J. Anderson is expected to basically have the role Jonathan Stewart did last year, but he has more juice left than the team’s all-time leading rusher did a season ago and would be close to a must-start if Christian McCaffrey goes down. Also, Cameron Artis-Payne could shine as the lead back if McCaffrey and Anderson both get hurt.

“The Human Joystick” is going to be a versatile compliment to Jordan Howard in Matt Nagy’s offense, but he would undoubtedly see more touches if Chicago’s centerpiece missed an extended period of time, putting him squarely on the RB2 map. Benny Cunningham could also make a fantasy impact in a featured role and would be worth a pickup in all leagues.

Joe Mixon is set to takeover as the workhorse, but the Bengals clearly feel comfortable with Giovani Bernard—who doesn’t turn 27 until late November despite entering his sixth NFL season—as his backup, and he’d be at least a FLEX option in a potential starting role. Mark Walton, a rookie out of Miami, would also be a waiver priority if he finds himself atop the depth chart due to injury.

Because Carlos Hyde was really good last year and is the veteran, we will give him the early edge in a competition with Nick Chubb, but either guy missing time could vault the other one to fringe RB1 status if the Browns improve like most expect. Duke Johnson Jr. has never been given a large workload, but that would likely change if injuries hit the running back room.

Rod Smith has a clear edge over Bo Scarbrough and would be a great option if Ezekiel Elliott gets hurt. But by pure opportunity (if Zeke and Smith get hurt), Scarbrough would be a solid fantasy play behind Dallas’ elite offensive line.

Devontae Booker and Royce Freeman are sort of the “lite-version” of Cleveland’s situation, and one of the two going down could lead to consistent RB2 status for the other. Second-year back De’Angelo Henderson should be on the radar, too.

Whether or not Kerryon Johnson earns the lead job in Detroit’s backfield committee will be determined in camp, but if he does, LeGarrette Blount would be difficult to trust as a FLEX. Should Johnson go down, though, Blount could be a reliable option in a good offense. Theo Riddick’s role probably wouldn’t change much no matter what happens ahead of him, but a few more touches should make non-PPR owners more comfortable starting him.

This is a complete toss up, but any of these three guys emerging would carry RB1 upside with an RB2 floor in Green Bay’s offense. We’ll know more once preseason action gets underway.

If D’Onta Foreman wasn’t coming off a torn Achilles, he would probably push for the starting job, but he needs to get healthy and have the veteran either fall off or get injured to realize his low-end RB2 potential; and even in a high-powered offense, it might not happen altogether if Foreman doesn’t return to pre-injury form. Alfred Blue would be a decent, low-upside FLEX in the lead role.

Indianapolis is expected to have a full-blown committee under Frank Reich, but there should be room for one of two options to emerge as fantasy contributors. Marlon Mack will likely start, but Nyheim Hines would carry some nice upside if given a larger workload. Jordan Wilkins could also make noise as a rookie.

T.J. Yeldon is coming off a solid season in which he averaged 5.2 yards per carry in limited action, and with Chris Ivory gone, he will be the clear handcuff to Leonard Fournette this fall. If both former SEC backs go down, Corey Grant would be worth adding in all leagues based on his big-play ability as a runner and receiver.

He still might have ended up breaking out, but it’s highly unlikely that Kareem Hunt would have led the NFL in rushing yards as a rookie if not for Spencer Ware suffering a season-ending knee injury last August. Now, Ware’s value is back to that of premium handcuff after Hunt took the league by storm. And in Andy Reid’s offense, Damien Williams—who flashed some talent with the Dolphins—would also be usable as the starter.

Austin Ekeler surprised with over 500 total yards and five total touchdowns as a rookie, but fantasy owners would be disappointed if they think he or rookie Justin Jackson could replicate Melvin Gordon’s production. Consider them both FLEX options in the event that they start.

It’s possible that Sean McVay works wonders and makes someone other than Todd Gurley a fantasy stud, but we wouldn’t count on it. Malcolm Brown gets a slight edge over rookie John Kelly right now, but pay attention in training camp to see who emerges as the immediate handcuff.

A three-way committee wouldn’t be at all surprising in 2018, but if either Frank Gore or Kalen Ballage finds himself as the starter and only healthy option for Adam Gase, they’d be a must-own similar to what Kenyan Drake rightfully is heading into the season.

Fantasy owners saw what Latavius Murray could do when he got healthy and handled the bulk of the touches following Dalvin Cook’s season-ending knee injury, and there’s no reason to think things would be different if he’s forced into action as the starter again in 2018. Cook and Murray both going down would put undrafted rookie Roc Thomas into FLEX territory if he earns the third running back job.

New England’s backfield is similar to Green Bay’s in that anyone could take control and turn into a fantasy star. Most notably, Sony Michel and Rex Burkhead would push for RB1 value if the other is injured. And while James White should have a relatively stable role, Jeremy Hill shouldn’t be discounted either.

When Mark Ingram returns from his four-game suspension, he will likely be a solid RB1 and must-start every week, but Alvin Kamara missing time would make Ingram arguably a top-five play. Behind them, Boston Scott has a chance to shine in September with the former Heisman winner inactive, and he would need to be rostered in all leagues if Kamara goes down early in the season or both co-starters go down at some point.

If not for the Giants taking a generational running back with the No. 2 pick in April’s draft, Wayne Gallman might have been slated for a huge season in Pat Shurmur’s offense. So, if Saquon Barkley gets hurt, the Clemson product should make a significant impact if he holds off Jonathan Stewart for touches.

The contract suggests Isaiah Crowell will be the starter for New York this season, and at the very least, he will likely get first crack at it in training camp. But if he falters or gets injured, Elijah McGuire could be the next man up and looks ready to be a potential difference-maker. Bilal Powell will likely remain involved, too, and Thomas Rawls should be on everyone’s radar.

There is still a chance Marshawn Lynch loses his starting job in camp, but even if he is the starter, the 32-year-old could break down at anytime after years of delivering punishment to defenders. That would leave Doug Martin atop the depth chart, and high-end RB2 status is definitely attainable if given the opportunity. If both veterans go down, Jalen Richard would be worth adding as the head of a committee in Jon Gruden’s offense.

Darren Sproles isn’t listed because he will have a stable, pass-catching role and probably won’t be heavily involved like he was at times in 2016. Instead, Super Bowl star Corey Clement should be considered a great handcuff to Jay Ajayi, and rookie Josh Adams has a chance to become relevant if he beats out Wendell Smallwood and Matt Jones in camp.

Le’Veon Bell played every game last season besides Week 17 (when Mike Tomlin rested the starters), but that doesn’t mean fantasy owners should think he suddenly has a clean bill of health. James Conner remains one of the best backup fantasy handcuffs and would be a must-own if Bell misses time; Fitzgerald Toussaint is also worth keeping in mind.

Kyle Shanahan’s offense should be able to make a usable fantasy option out of almost anyone, so Matt Breida and Joe Williams—if he is more focused and healthy this season—would both be excellent pickups if Jerick McKinnon went down.

Seattle has big things in mind for first-round pick Rashaad Penny, but Chris Carson was phenomenal as a rookie already and is probably gearing up for an opportunity to pick up where he left off before getting injured. If both guys go down, C.J. Prosise might be given more run as a traditional backfield option.

Ronald Jones II and Peyton Barber are expected to split touches for the Bucs, and either young back missing time would be a clear boost to the other. It might be best to look elsewhere if Charles Sims is forced into the starting role, though.

Tennessee is another team with co-starters in Derrick Henry and Dion Lewis, and Lewis in particular would get an uptick in value—perhaps similar to what he was last year with the Patriots—if Henry went down. Should both options get hurt, Akrum Wadley would also be worth picking up and starting in what is expected to be a vastly improved offense.

Chris Thompson, like Darren Sproles, will have a stable role no matter what, but he’d be a strong RB2 if he was forced into a big starting role. In other words, he won’t be forced into a larger workload barring a barrage of injuries, so Samaje Perine and Robert Kelley are the focus with Derrius Guice out for the year with a torn ACL.