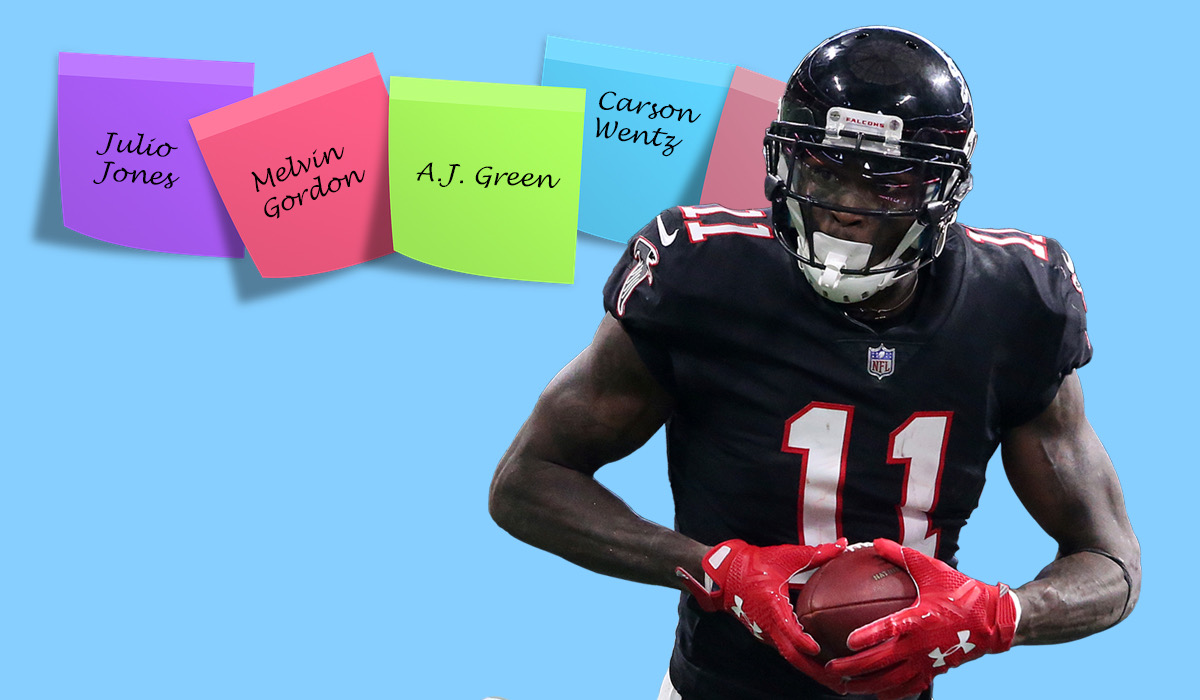 
Periodically throughout the summer, I will be dropping a fantasy football mock using the FantasyPros Draft Simulator, starting today with a 10-team, 0.5 PPR format.

Thoughts: The shock of Round 1 is that Saquon Barkley wasn’t the first-overall pick, but people drafting second or third in real drafts probably shouldn’t get their hopes up come August/September. I made Davante Adams the top receiver off the board after Aaron Rodgers said he’d “like to throw to [him] more” in 2019, and the 26-year-old’s floor might be 100/1,200/10.

Thoughts: Fantasy owners probably shouldn’t go into the draft with a preconceived positional strategy (RB-RB, WR-WR, RB-WR, etc.), but I happened to get a couple high-end WR1s to build the roster around here. Julio Jones (170) and Davante Adams (169) led the league in targets last season.

Thoughts: The only drawback of getting two stud receivers is that the clear RB1 options are probably gone by the middle of the third round, so I figured it would be a good idea to get a third elite pass-catcher in Zach Ertz, especially after Travis Kelce and George Kittle were selected. Adams-Jones-Ertz is a very strong foundation, particularly in a 0.5 PPR league.

Thoughts: I would have been thrilled to see Marlon Mack still available, but Devonta Freeman gets the edge over Leonard Fournette because the roster now has a big chunk of the high-powered Atlanta offense. Plus, the Falcons really bolstered the offensive line in the offseason, and they clearly feel Freeman will bounce back after letting Tevin Coleman walk.

Thoughts: The Lions are going to run the ball a ton this season, so even if he splits carries with C.J. Anderson, Kerryon Johnson is talented enough to be worth selecting at his top-50 ADP. The former Auburn star rushed 118 times for 641 yards (5.4 YPC) and three touchdowns as a rookie, also chipping in a 32/213/1 line in ten games.

Thoughts: FantasyPros currently has Tyreek Hill getting drafted in the middle rounds (as you’ll see a little bit later), but even if the troubled receiver somehow plays in 2019, his teammate Sammy Watkins could be a steal. The Kansas City offense was significantly better with Watkins on the field last season, and he should have more chemistry with Patrick Mahomes in Year 2.

Thoughts: I just missed on Matt Ryan to pair with Julio Jones and Devonta Freeman, but Calvin Ridley gets an ever-so-slight edge over Mark Ingram because a) he’s insurance for Watkins, and b) it’s unclear how many carries Baltimore will give to Justice Hill and Gus Edwards. Plus, if Ridley gets on a hot touchdown streak like he did as a rookie, he could be a prime trade piece.

Thoughts: Miles Sanders would have been great as a potential three-down back for the Eagles, but with the rookie gone, I went with Tarik Cohen because he will have a defined pass-catching role in Matt Nagy’s offense, making him a better fit than Derrius Guice (injury concerns), Lamar Miller (blocking concerns), or Tevin Coleman (committee concerns).

Thoughts: I would have liked to wait at quarterback (you’ll notice some big-time names don’t even get drafted), but Carson Wentz is too good a value to pass up, as Philadelphia is sure to let him throw early and often to prove they made the right choice in keeping and extending him over former Super Bowl MVP Nick Foles. Having Wentz and Ertz would be very frustrating for fantasy opponents.

Thoughts: As alluded to, Derrius Guice has had some complications from his torn ACL, so we might see Adrian Peterson atop the Washington backfield once again in 2019. Guice is fully expected to be ready for Week 1, but the Redskins need to win games, and AD is fresher (despite entering his age-34 campaign) and more reliable at this point.

Thoughts: I’ve played it safe at running back thus far, but Ronald Jones II—who was compared to Jamaal Charles and LeSean McCoy last year—is a great lottery ticket if he can earn playing time in 2019. Bruce Arians’ offense should stretch the field with Mike Evans on the perimeter and O.J. Howard working the seams, leading to soft boxes.

Thoughts: Matt Breida was almost the pick here, but the investment in Atlanta’s offense so far gave the edge to Ito Smith. The second-year back will obviously be a valuable handcuff to Devonta Freeman, and he also has standalone value of his own behind what should be a bullying offensive line.

Thoughts: As stated, Tyreek Hill is a mid-round pick for the draft simulator right now, but if he ends up facing a lengthy suspension or is released outright, there is almost no way Mecole Hardman will be available as a late-round flier. The Georgia speedster only had 961 career yards in college, but all it will take is one throw from Patrick Mahomes to have a day for fantasy owners.

Thoughts: It isn’t a necessity to draft two quarterbacks, but Carson Wentz’s injury history could make it a wise investment. Dak Prescott will likely be undervalued all summer, which would be a huge mistake for a guy that has finished as a top-12 fantasy quarterback in each of the past three seasons and will be playing in the most creative offense of his career this year.