WOLF SPORTS ALERT There may be temporary login issues due to site maintenance. Thank you for your patience!
Home / frontfantasy / 2022 Fantasy Football Preview: Baltimore Ravens 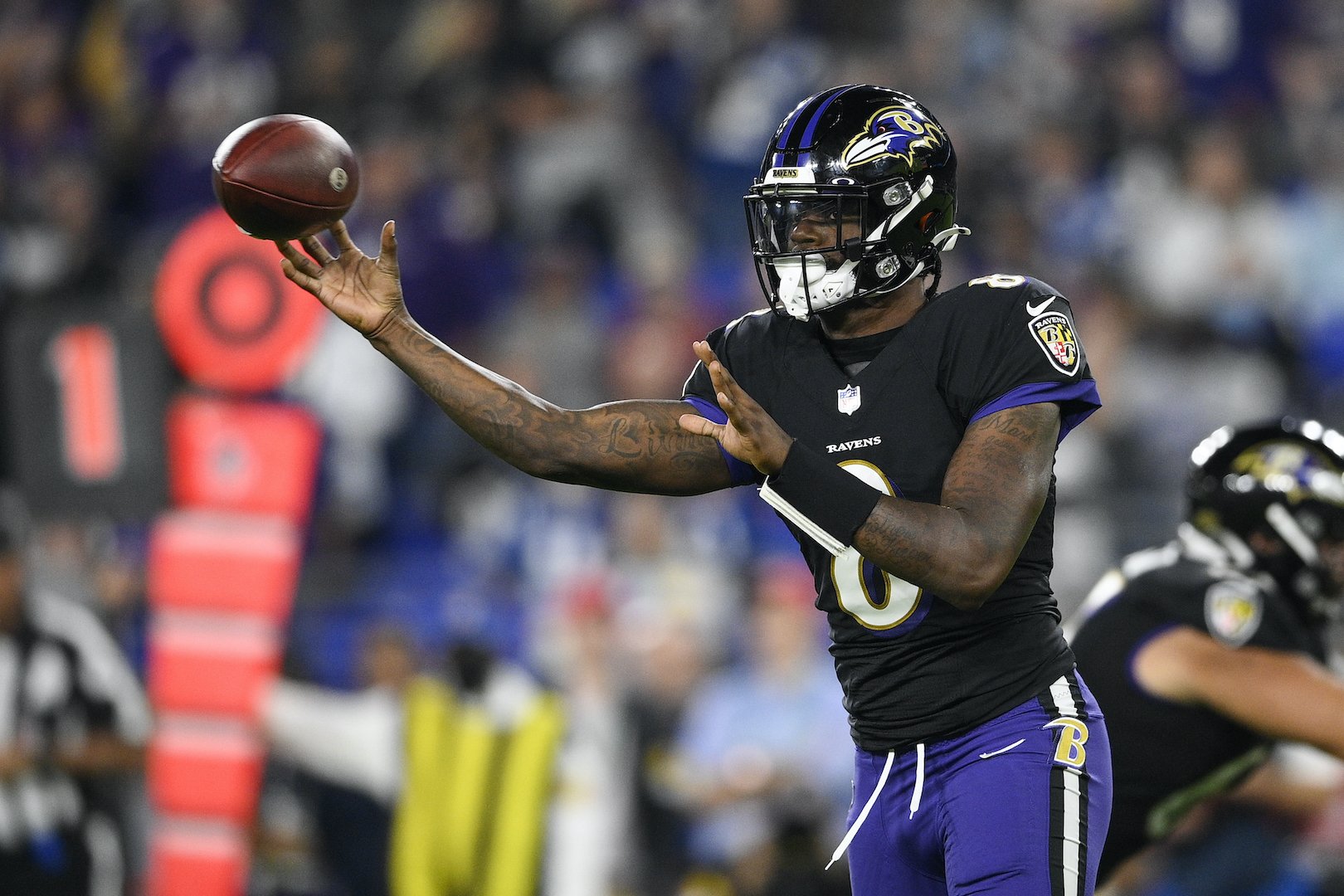 QB Lamar Jackson: The hope for Jackson is that he’ll return to the high-end QB1 ranks in 2022 after being impacted by injuries last year, but would that be a wise bet? The former NFL MVP has finished as the QB8 in fantasy points per game in each of the past two seasons, and it’s tough to see how losing top wideout Marquise Brown can be a good thing for the offense. Maybe the selections of rookie tight ends Charlie Kolar and Isaiah Likely will be looked at as an investment into what Jackson is most comfortable with, but the passing numbers need to be there for Jackson to recapture the 2019 magic—when he led the league with 36 passing touchdowns.

QB Tyler Huntley: Huntley will ideally not see the field this year, but he’s worth mentioning because of his play off the bench last season in a very difficult spot with losses to the Packers, Rams, and Steelers by a combined five points. The big game for the mobile backup resulted in 35.9 fantasy points versus Green Bay, and Huntley would be a QB1/QB2 streamer if he again finds his way into the starting lineup at some point.

RB J.K. Dobbins: He’s coming off a torn ACL that knocked him out for the entire 2021 season, but Dobbins led all running backs with 6.0 yards per carry as a rookie two years ago, and the Ravens should be getting left tackle Ronnie Stanley back along with a new first-round center in Tyler Linderbaum. Also, the trade of Marquise Brown to Arizona is a sign that the offense will be very run-heavy, and Dobbins had nine rushing touchdowns on just 134 attempts in his first season. We’d bet the stock will climb over the next several weeks, but Dobbins is currently undervalued as an upside RB2.

RB Gus Edwards: Edwards has remarkably been between 711 and 723 rushing yards in each of his three healthy seasons, and he can return solid FLEX value when game flow is in the team’s favor this year. There shouldn’t be much worry about Mike Davis or rookie Tyler Badie taking away work from a big runner averaging 5.2 yards per carry for his career as a hammer in the Ravens’ unique offense.

RB Mike Davis: The Panthers (224 touches) and Falcons (182 touches) have given Davis meaningful snaps in each of the past two years, and there is a chance Baltimore runs the ball enough for a weekly role that results in decent fantasy value. For now, it’s tough to recommend the veteran as a redraft stash compared to some of the younger options around the league with more upside.

RB Tyler Badie: Badie proved he can handle a heavier workload with 322 touches in his final season at Missouri, and he can easily earn the No. 3 job with a strong summer—especially after apparently being an early standout at OTAs. The RB-heavy Ravens should keep four options on the roster, and Badie can force his way into the rotation; the potential split if an injury occurs would be interesting to see.

RB Justice Hill: We were high on Hill coming out of Oklahoma State, but he’s handled just 17 touches over the past two years (including a missed 2021 season), and the roster spot will need to be earned this summer. At his best, Hill can be a slashing runner with the ability to contribute on passing downs and special teams. He’d be a name to monitor as a summer mover if cut and signed by another team.

WR Rashod Bateman: Baltimore trading Marquise Brown to the Cardinals opens the door for Bateman to be a big-time option for Lamar Jackson, and he should see a healthy number of targets with 146 left behind from Brown’s departure alone. An argument can even be made for Bateman’s skillset being a better fit for a lot of the underneath routes Brown often ran, and the backfield being healthy compared to last season will elevate the entire offense. With underrated big-play upside in addition to being a reliable possession receiver, Bateman is a WR3 that can easily be ranked higher at a crowded position.

WR Devin Duvernay: Duvernay is the favorite for the No. 2 job in Baltimore, but will there be enough targets to go around for him to make a significant leap in production? Last year, Duvernay was already playing over half of the team’s offensive snaps, and it’s possible his role doesn’t change much with James Proche (21% snaps played in 2021) and Tylan Wallace (7%) primed for more work on a run-first offense. Preseason will be key for him and the rest of the wideouts.

WR James Proche: A competitive receiver that plays bigger than his size and has tremendous hands, Proche shouldn’t be overlooked as a potentially significant contributor on a depth chart that appears open behind Rashod Bateman. The 25-year-old made the most of his playing time with 10.1 yards per target on 20 opportunities last season, and he brings inside-outside versatility to increase his chances earning extended playing time.

WR Tylan Wallace: Wallace only caught two passes on six targets as a rookie, but again, the opening is there for any or all of Baltimore’s young wideouts to step up. Although Marquise Brown didn’t have a ton of vertical success considering his skillset, Wallace is a natural fit—while a different style player—to run a vertical route tree on the perimeter. He’s an intriguing dynasty buy.

WR Slade Bolden: Many pegged Bolden as a future Patriot because of his game and having been roommates with Mac Jones, but he signed with the Ravens as an undrafted free agent with a quality opportunity to not only make the 53-man roster, but also see snaps in Year 1. Still, it might take a couple of injuries to have redraft value as a rookie.

TE Mark Andrews: A league-winner last season with monster performances in Week 14 and in the fantasy playoffs, Andrews went for lines of 11/115/1, 10/136/2, 8/125/1, and 6/89 during that stretch—averaging 11.63 yards per target. There is some concern about the hot finish without Lamar Jackson in the lineup boosting his stock a bit too much, but Andrews was on pace for 91 receptions, 1,149 yards, and seven touchdowns in 12 games before the former NFL MVP was done for the year. Consider him a high-end TE1 option that can be drafted as high as the third round.

TE Nick Boyle: One of the best blocking tight ends in the NFL, Boyle returned late last November from a major knee injury suffered in 2020, and he should be completely rounded into form by training camp. From a fantasy perspective, there is limited appeal for Boyle behind Mark Andrews, and the rookie pairing are more likely contributors in terms of putting up numbers.

TE Charlie Kolar: The touchdown upside for Kolar is what is most exciting about his fit with the Ravens—particularly in one-on-one coverage due to the attention Mark Andrews should draw. At six-foot-seven with a huge catch radius, Kolar going for a handful of touchdowns (or more) is entirely possible in Year 1 despite being a rookie, so he can be a DFS dart throw if you can find some fortune picking your spots.

TE Isaiah Likely: Not having prototype size with short arms and a non-typical body type for a tight end led to Likely falling some in the draft, but the Ravens gave him a high enough grade to take at the end of Round 4 despite already having Mark Andrews and selecting Charlie Kolar 11 picks earlier. We’d expect some creativity in terms of the usage of Likely, and he is a dynasty investment worth making if you have patience.

The RB2 rankings are very close for the range Dobbins currently sits in, but he should arguably be a handful of spots higher as the lead back of a run-dominant offense. Dobbins’ efficiency as a rookie was remarkable with nine touchdowns on 134 rushing attempts (to pair with the 6.0 yards per carry), and Baltimore’s selection of Iowa center Tyler Linderbaum in Round 1 should spring holes on the second level for the former Ohio State standout.

We compared Proche to Jarvis Landry in the pre-draft process a couple of years ago, and there is no way he should be on the fringes of the dynasty radar—with most “experts” not even having him ranked. Our full scouting report for Proche can be read here, but he has sticky hands and rare catch focus to become a trusted target for Lamar Jackson.

In eight games with double-digit carries as a rookie, J.K. Dobbins had a season-long pace of 221 carries, 1,356 rushing yards, 14.9 rushing touchdowns. He averaged 6.1 yards per carry in those games.