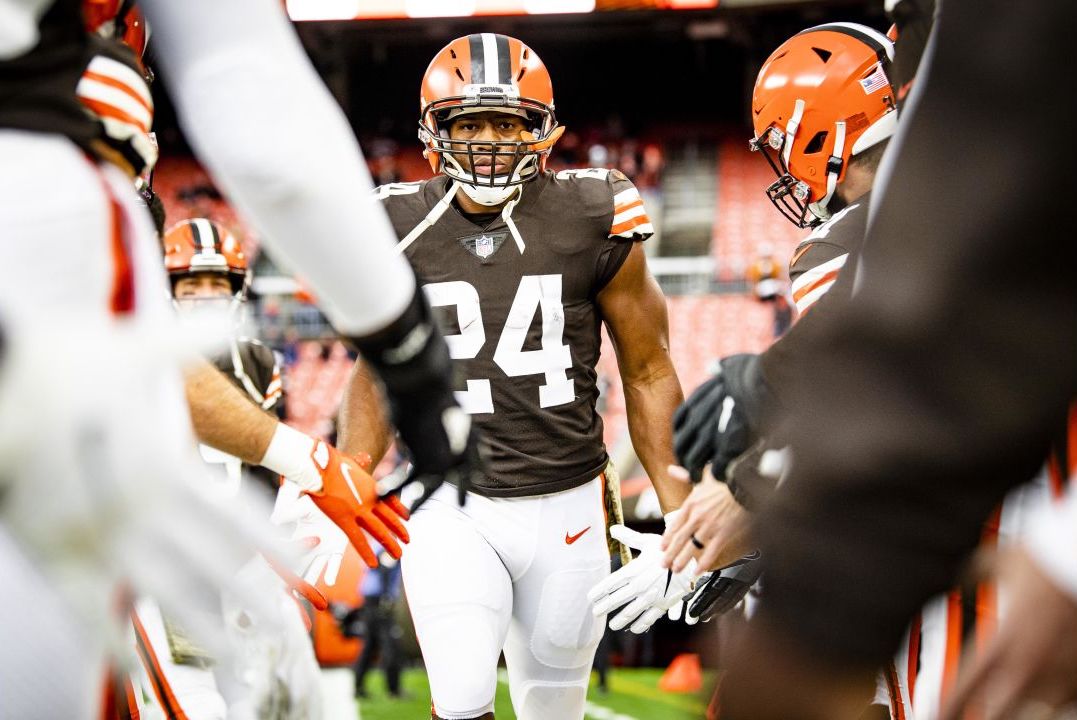 
At some point before the season, I will have a “Thumbs Up, Thumbs Down” article for players that I’m higher or lower on in 2021. This article, though, is all about reflecting on “my guys” from previous seasons, as this roster is filled with my favorite players to roster in fantasy leagues over the past decade-plus.

I won’t bring up names for all the embarrassingly horrible takes from people in the industry when it comes to Allen in the pre-draft process and early in his career, but he was called a “low-probability prospect” that would only be drafted by a “dumb” team, compared to J.P. Losman, and mocked for having a low completion percentage (which means nothing if you actually watched his tape) by some of the “popular” analysts on social media. For me, Allen was the clear QB1 in the 2018 class, and his real-life and fantasy success is a reminder that the loudest people often have no idea what they’re talking about.

Chubb is the headliner for this article, as I’ve drafted him in my main league in all three seasons since he entered the NFL—and he’s had a ton of huge performances. Even when Chubb was behind Carlos Hyde to begin his career, we had him ranked as a seventh-round pick in 12-team leagues and advised patience for the then-rookie runner because of how talented he was. The best part of having Chubb is his high character making him very easy to root for, which is a theme for every player on the list in an era where stars can easily be influenced by outside forces to become too self-centered.

Those who have followed Wolf Sports for a few years know that we were adamant about having faith in Henry before he became an absolute monster—and that faith really paid off when his breakout began against the Jaguars in December of 2018. Since then, Henry has had per-game averages of 21.9 carries, 118.6 rushing yards, and 1.1 rushing touchdowns in 35 appearances as a monster, high-end RB1.

Brown is the youngest on the list in terms of age (24) and experience (two seasons), but I have been high enough on him to crack the roster already. While injuries hurt his overall season finish, Brown was ranked as my WR6 last year, and those who drafted him high—despite others wrongly worried about his efficiency not holding up—were more than satisfied with the production. Don’t overlook him as a top-five WR1 across from Julio Jones.

I honestly didn’t even remember how heavily I invested in Gronkowski until looking back at my draft history—spending the No. 4 overall pick, No. 8 overall pick, and No. 9 overall pick on him back when he was a dominant force for New England (plus the No. 17 overall pick for another year of heavy investment outside the first round). The key to making a “premium” selection early (i.e. quarterback or tight end) is to hit on other positions a little later, which you can be confident in being able to do using Fantasy Consigliere rankings.

Tevin Coleman deserves an honorable mention here, but Moreno is more of a throwback selection, and I love how determined both guys were/are as runners. Injuries impacted Knowshon in 2011 and 2012, but confidence in him paid off when Denver broke offensive records the following season—and Moreno had 241 carries, 1,038 rushing yards, ten rushing touchdowns, 60 receptions, 548 receiving yards, and three receiving touchdowns as a late-round steal.