WOLF SPORTS ALERT There may be temporary login issues due to site maintenance. Thank you for your patience!
Home / frontfantasy / Best Fantasy Football Team Names For The 2019 Rookie Class 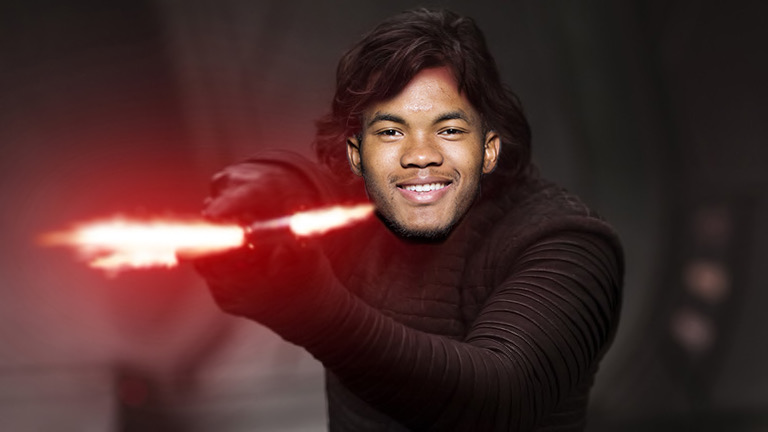 
Fantasy football season won’t really kick in until August, but it’s never too early to think about potential team names for your squad. Here are ten new names you can use based on this year’s rookie class. [Note: if you want a custom logo, get Fantasy Consigliere (link at the bottom) and we’ll make you one for free]

I don’t think anyone views Kyler Murray as a villain, but his dynamic playmaking ability should soon instill fear in opponents similar to how Star Wars baddie Kylo Ren can with his unique lightsaber (which happens to match the Cardinals’ main color) and force powers.

Star Wars fans who love the Skywalker saga might want to go back to Episode I for their team name, so “The Fantom Menace”—a play on Noah Fant’s name—would work. You could probably make a pretty sick logo for both this and “Kyler Ren”.

You can’t go wrong with a Clint Eastwood movie for your team name, and we have a couple. The first is based on Patriots first-round pick N’Keal Harry, and the best part is the trash talk you would have in your arsenal from the classic film.

San Francisco is about as far from the Night’s Watch as you can get, but this is the best bet for people who want a new Game of Thrones name for 2019. Plus, Deebo Samuel is a very tough receiver, and while that couldn’t always be said for Samwell, he did earn the nickname “Sam the Slayer” for a reason.

Based on the true story that Clint Eastwood made into a movie (15:17 to Paris), I think this might be the best team name on the list, as rookie receiver Parris Campbell is No. 15, and Andrew Luck is of course No. 12. The two will look to connect early and often for Indy.

A name for those who snag Seattle wideout D.K. Metcalf in redraft or dynasty leagues, “D.K. 64” is a throwback to the classic video game Donkey Kong 64 on Nintendo 64. While Metcalf and Donkey Kong have much different builds, both are athletic freaks in their own right. Oh, and Metcalf happened to be the No. 64 pick in the 2019 NFL Draft.

One of the best pure speedsters entering the league this fall will be Redskins receiver Terry McLaurin, and he has the perfect name for those who draft him and own (or more likely, dream to own) a McLaren. It’s understandable that the Ohio State product’s 40-yard dash of 4.35 seconds was a bit slower than a McLaren’s 0-60 MPH time of 2.50 seconds.

It might seem crazy to name a fantasy team after a guy that projects to be the fourth receiver for an NFL club, but Kliff Kingsbury will want to throw a ton, and Hakeem Butler has more than enough talent to put up big-time numbers for an offense that could feature four wideouts as their base personnel. It also helps that Butler—like NBA legend Hakeem Olajuwon—is one of the tallest players in the league.

You could use any number of references for Bryce Love’s last name, but “Love & Football” is simple and pretty fitting for people that are obsessed with fantasy football or football in general. You could also go with “Love Is A Battlefield” just to use this clip whenever possible in a fantasy group chat.

“Love” and “Justice” (for Baltimore running back Justice Hill) are two strong options to use in a variety of ways, but naming your fantasy squad after the most famous team of superheroes ever is tough to beat. Plus, an awesome logo would wouldn’t take too much effort to make after filling out your roster this summer.