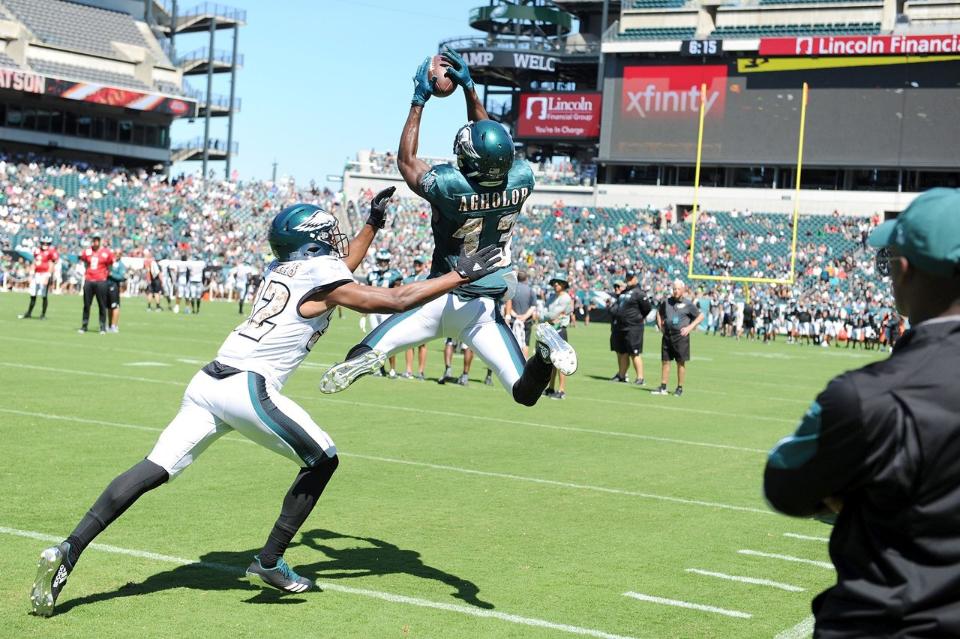 I originally picked all these players last week when I did the running backs and quarterbacks, and Agholor was ranked 95th at his position before jumping up to 77th as of now. I know I said a deep sleeper in top-80 at wide receiver, but I think it’s fair to keep the Eagles wideout here. You can read our most recent fantasy news on Agholor to see the reason for his jump, and I’ll just say that even last week, I was going to say I wouldn’t be surprised to see the former first-round pick lead the Philly wide receivers in fantasy points this year.

A first-round pick in the class after Agholor, Laquon Treadwell was selected 23rd overall by the Vikings in 2016. As a rookie, the former Ole Miss star struggled to earn playing time for Minnesota, as he caught just one pass for 15 yards. A switch at offensive coordinator midway through the season couldn’t have helped the development for Treadwell as far as learning the playbook, but a full offseason in Pat Shurmer’s offense should allow him to get on the field. Even with Stefon Diggs and Adam Thielen (and Michael Floyd, when he returns from suspension) on the depth chart, Treadwell has the talent to be a fantasy factor, especially in a fast-paced offense.

This season, Tyreek Hill will take the role Jeremy Maclin had last year in Andy Reid’s offense, but there is definitely some concern a regression could come for the explosive playmaker. Hill caught 61 balls in 2016, but averaged just 9.7 yards per catch, and his 12 total touchdowns as a rookie will be difficult to duplicate. Entering his third year, Chris Conley actually profiles more favorably to replace Maclin, and he had just 63 fewer yards than Hill last season, despite having only 44 receptions. Conley is six-foot-three and ran a 4.3 40-yard dash, and could see a lot of soft coverage with defenses worried about Hill and Travis Kelce.

Tampa Bay is pretty loaded on offense, but it still sounds like Godwin has been so good in training camp that he will push solid slot receiver Adam Humphries out of three-wide-receiver sets. With DeSean Jackson entering his age-30/31 season, Godwin could become a consistent fantasy option if the deep threat misses timem and even if Jackson stays healthy, Godwin could quickly establish himself as someone who could have some big games in Dirk Koetter’s offense. Going outside the top-120 at his position is mind-blowing.

Swoope has just 15 career catches (all in 2016), but he is ready to breakout after the Colts traded Dwayne Allen to New England. Jack Doyle is the starter and is rightfully going well ahead of Swoope, but Indy has been a spot where two tight ends can both be fantasy assets. The 25-year-old averaged a Gronk-like 19.8 yards per catch last season, and with more playing time, he should catch more passes and see more scoring opportunities.

The Packers signed Martellus Bennett this offseason, but I honestly can’t remember a time where people were talking about Bennett that Kendricks wasn’t also brought up. Green Bay might want to use more two-tight-end packages this year to create a more balanced offense, and Kendricks is coming off a career-high in catches (50) with the Rams, and will now have Aaron Rodgers orchestrating the offense with the Pack.

New Rams head coach Sean McVay handpicked Everett to be his “Jordan Reed,” and the team used their first selection in the 2017 NFL Draft to get him. It is usually difficult for rookie tight ends to make an early impact, but LA is lacking at wide receiver; Everett could immediately be the top weapon (excluding Todd Gurley) for Jared Goff.

Leggett, too, is a rookie, but the Jets probably have even less talent at wideout than the Rams do, especially after Quincy Enunwa (neck) was placed on IR. Austin Seferian-Jenkins has apparently changed his ways and could live up to his potential, but he will miss the first two games of the season due to a suspension. Leggett will get his chance to become the top tight end—and maybe even top option in the passing game—if he gets off to a hot start.