WOLF SPORTS ALERT There may be temporary bugs due to site performance upgrades. Thank you for your patience!
Home / frontfantasy / Determining The Best Fantasy Fits For 2018 NFL Free Agents 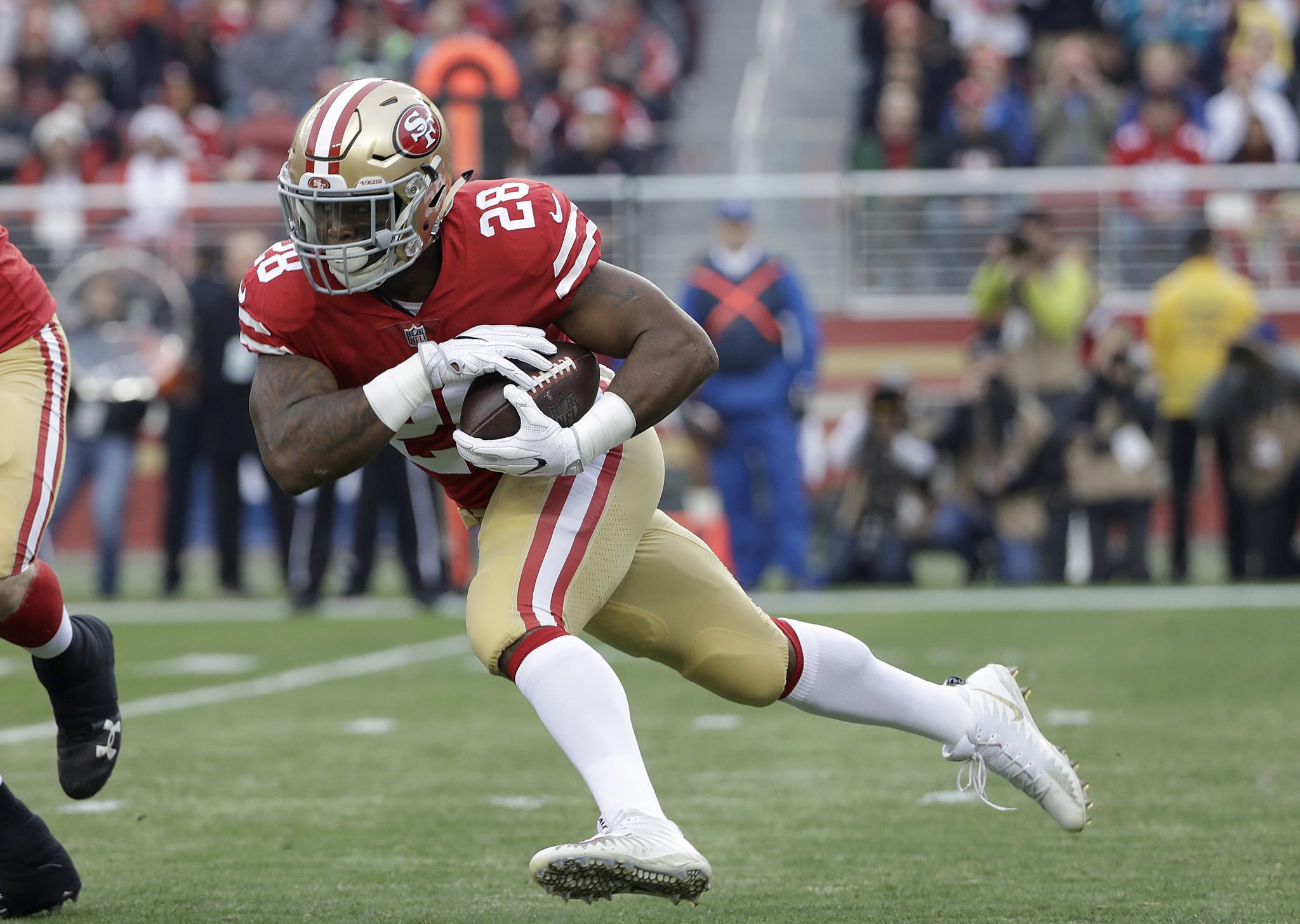 
NFL free agency begins next week, and many skill position players will be looking for a new home if they don’t end up re-signing with their current teams. There are many factors that go into a player making a decision on where he signs, but this will focus on where the best spot for a player is from strictly a fantasy perspective, i.e. the place where they can put up the best numbers. Of course, this is keeping it realistic with teams that actually might sign the players (for example, it would be stunning for a teams like the Patriots and Steelers to sign Allen Robinson or Sammy Watkins).

With Jimmy Garoppolo at quarterback, the Niners are clearly on the rise. Pierre Garcon is a very reliable target, and Marquise Goodwin played like a number one receiver when Garcon went down with a season-ending neck injury last year, but Allen Robinson would be top guy in the group. A-Rob in San Fran could be the perfect match, and as the team emerges into a serious contender, Robinson could be a perennial 1,200-yard receiver with Jimmy G throwing to him.

Perhaps more than any team, the Bears are looking for some receiving help for young quarterback Mitchell Trubisky. Sammy Watkins would be the clear top receiver in Chicago, and his ability to get deep matches up perfectly with Trubisky’s accurate deep ball. Watkins could be a target monster with the Bears, which could lead to some monster numbers.

This is contingent on the Cardinals adding more on offense around Larry Fitzgerald and David Johnson, but Arizona would be a good spot for him to put up some numbers. With DJ in the backfield, it would allow Cousins to utilize play-action passes, which he excels at, and his accurate intermediate passing would mesh well with Fitz. We’ve seen Carson Palmer put up big numbers in the desert, and while Bruce Arians is gone, it should be a comfortable spot to do the same with offensive coordinator Mike McCoy.

Houston with Deshaun Watson is also a solid landing spot for Jimmy Graham to put up numbers, but the Saints are the clear best choice. The big tight end put up a whopping 46 touchdowns in his final four seasons with the Saints, as he was basically a glorified wide receiver that you could insert in the TE spot of your fantasy lineup.

The Patriots don’t have a ton of cap space, but they should be able to make it work to sign some players in free agency. After Carlos Hyde showed his ability as a pass-catcher this season, the Patriots could be intrigued by his ability as both a tough downhill runner that can also catch the ball from Tom Brady when needed. Clearly, the scoring upside for Hyde in New England would be huge.

New England would also be a good spot for Dion Lewis to remain, but the Patriots connections could have him land in Detroit with the Lions. Ameer Abdullah and Theo Riddick are still there and are kind of similar players, but this new regime might want to get Lewis in there and hand him the reigns in the backfield. Also, Matthew Stafford is good at finding his checkdown and letting his backs to work on the perimeter, so the masterfully elusive Lewis could continue to do some major damage there.

While LeGarrette Blount excelled with the Eagles and was a huge part of them winning their first Super Bowl, Jay Ajayi, Corey Clement, and potentially Darren Sproles are still all in the backfield for the team. With Dion Lewis and Rex Burkhead potentially leaving New England, it could open things up for Blount to return there, where they clearly have a mutual respect. He had 1,161 yards and 18 touchdowns with the Pats in 2016.

The Broncos and Cardinals might also be a good spot, but Sam Bradford has played like an elite quarterback whenever he was on the field over the last two seasons with Minnesota. If the Vikings bolster the offensive line some more, it would give Bradford more time to get the ball into the hands of playmakers like Adam Thielen and Stefon Diggs on the outside.

A couple of injuries took parts of Burkhead’s first season in New England, and he could return there and emerge as a big-time fantasy asset, but if he leaves, the Browns would be a good landing spot. People might not know it, but Cleveland has a really strong offensive line, and Hue Jackson is supposed to like to run the ball (even if he’s gotten away from it too much as the Browns head coach). Burkhead could return to the AFC North and carry the load for the Browns.

Danny Amendola will probably remain with the Patriots, and it’s probably the best spot for him to give some big weeks as a FLEX option catching passes from Tom Brady. He could probably go somewhere else like Chicago and have a higher weekly floor, but the most fantasy value for Amendola remains in New England.

After the revamping of the receiving corps didn’t work out last season, the Redskins could look to do it again in 2018. Paul Richardson stayed healthy and became one of Russell Wilson’s most reliable targets over the last season-plus, and he would give Jay Gruden someone he can trust to make some plays as a deep threat on the outside. Depending on Josh Docton’s progression and Jamison Crowder’s role inside, Richardson could become the top wide receiver for Washington if he lands there.

Chiefs GM Brett Veach has already said the team wants to add speed to the offense so unleash Patrick Mahomes massive arm, and John Brown would fit the category. Brown has the ability to get deep opposite Tyreek Hill, and he also is a little more crafty than Hill at this point and gets open on intermediate routes using more route-running ability. If Kansas City’s passing offense remains as aggressive as last season, or even more so, there could be room for Brown to get back to a WR2 option.

Wherever Trey Burton lands, he should have more of a featured role than he did in Philadelphia behind Zach Ertz. Last season, Burton scored against the Broncos, so they saw up close and personal what he can do as versatile tight end. Denver might need a number three receiver to take pressure of Demaryius Thomas and Emmanuel Sanders, and Burton could help fill the role as a guy in the middle.

Teddy Bridgewater hasn’t really played over the last two seasons, so it’s tough to gauge where he’s at, and the Vikings remain the best spot for him fantasy-wise. Not only does the locker room love him, but he’s also familiar with the players even though a lot has changed since he last started under-center for them. Bridgewater’s comeback story would get even better if he took back his spot and put up some big numbers while leading his team to wins.

Denver has been connected to Case Keenum (if you believe those reports at this time of year), and they would be a solid spot for him with a couple of good receivers like he had in Minnesota, but the Vikings have been the spot he’s played his best NFL football, and they are the best spot for him both real-life and fantasy-wise. Keenum was a legit usable QB1 once he got going last season, and he could be a backend QB1 option in 2018 with the Vikings.

Jarvis Landry isn’t a free agent after he was franchised by the Dolphins, but it looks like he’ll be on the move via a trade at some point this offseason. The Ravens might be the best spot for him, as I could picture Joe Flacco throwing darts to him to help move the chains and keep the offense going. However, Landry might not put up the type of catch totals he did in Miami through his first three seasons if he goes to a new team.