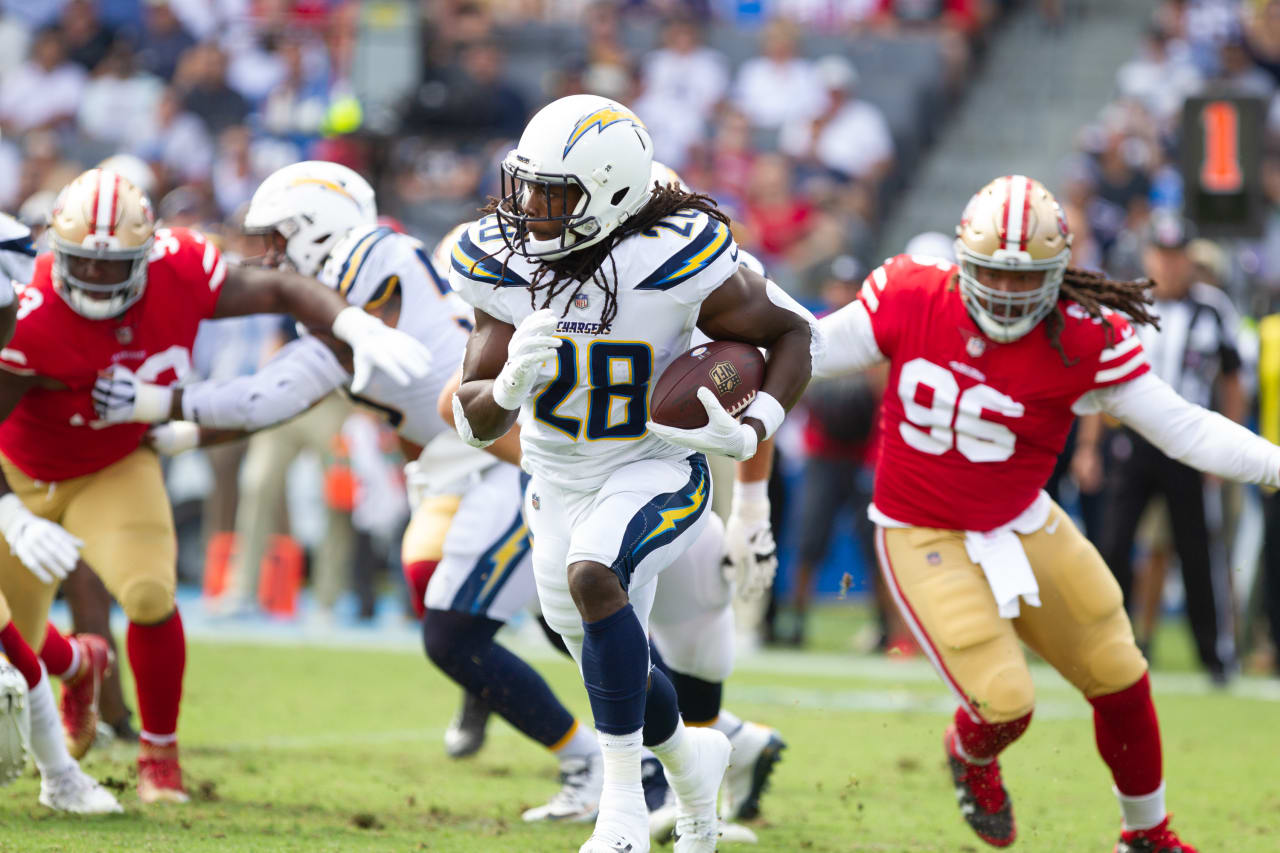 
After ranking the top dynasty quarterbacks a couple weeks ago, it’s time to evaluate the running back position. As previously stated, there is quite a bit of projecting here because free agency and the draft still haven’t happened, but this is how I view the league’s top runners from a fantasy perspective for 2019 and beyond. [Note: age at the start of the 2019 season is listed in parenthesis]

It’s still hilarious to me that people tried saying Saquon Barkley was overrated as an NFL prospect, but those who had Fantasy Consigliere for exclusive fantasy draft rankings were able to see he was our No. 2 overall player for the 2018 season (exactly where he finished out of the non-quarterbacks). Barkley totaled 2,028 yards and 15 touchdowns in his sensational rookie campaign, and the Giants are only going to get better as they improve the offensive line. Having just turned 22 earlier this month, Saquon is the easy choice at the top of dynasty drafts; I would even say he’s worth selling the farm for to be set at RB1 for the next 8-10 years—especially if you have our premium service for advice on upcoming draft and free agent values to make up for a Godfather offer.

The next five players could basically go in any order, but Todd Gurley shouldn’t be penalized based on what was clearly an unhealthy postseason for the superstar back. Gurley carried fantasy owners over the past two years by scoring 40 total touchdowns in the regular season, and his individual talent combined with Sean McVay’s offensive mind probably makes him the biggest yearly threat to break LaDainian Tomlinson’s seemingly unreachable 31 scores from 2006. The bigger concern than health or C.J. Anderson potentially returning is the status of left tackle Andrew Whitworth and left guard Rodger Saffold, both of whom could be gone due to retirement and free agency, respectively. Still, Gurley is a top-three pure runner that can also do damage as a receiver, and he won’t turn 25 until training camp.

Despite missing four games in the regular season, Melvin Gordon had his best year to date in 2018, averaging 114.6 total yards per game with 5.1 yards per carry and 14 total touchdowns. The Wisconsin product established himself as a high-end RB1 through the first three months of the season, rivaling fellow 2015 first-rounder Todd Gurley as the best fantasy option in the land before unfortunately spraining his MCL. Overall, Gordon is an all-around back that can run inside, run outside, catch passes, hold up in pass protection, and convert in short-yardage situations, so he will remain a top-five option at the position in a high-powered offense. If former Day 2 picks Forrest Lamp (No. 38 overall) and Dan Feeney (No. 71 overall) can both reach their potential on the interior of the offensive line heading into their third season, watch out.

Hopefully fantasy owners were able to buy low on Christian McCaffrey while they could, as from Year 1 to Year 2, he continued his elite production through the air (including an NFL-record 107 receptions for a running back) while increasing his yards-per-carry average from 3.7 to 5.0. A true offensive centerpiece, McCaffrey almost never left the field—91.7% of the snaps played led the position and was significantly higher than Saquon Barkley (83.0%), who ranked second—but he still probably wasn’t given enough touches for a Carolina team that went 1-7 down the stretch. Offensively, I expect the Panthers to get things corrected in 2019, though, and the only thing that could really hurt McCaffrey’s stock this offseason is Carolina drafting a power back to vulture goal-line touches.

If you want the safest possible option in dynasty leagues, look no further than Ezekiel Elliott. The No. 4 overall pick in the 2016 NFL Draft has averaged 101.2 rushing yards per carry through three seasons, and he would almost certainly be the league’s back-to-back-to-back rushing champ if not for a controversial six-game suspension in 2017. And while Zeke was more involved as a receiver last year with a career-high 77 catches, he will really be a force if he can get the 7.4 average closer to the 10.9 yards per reception he averaged over his first two seasons. The offensive line is obviously a selling point (and it projects to be even stronger next year as Connor Williams gets more comfortable at left guard and Travis Frederick hopefully returns at center), but Elliott’s vision and power allow him to maximize every opportunity.

Age is the only reason David Johnson isn’t higher, as he will turn 28 a week before Christmas, which makes him nearly two years older than every other player on the list. Fortunately, new head coach Kliff Kingsbury should do a much better job of getting Johnson the ball than the previous coaching staff did, and Kyler Murray potentially being drafted with the No. 1 overall pick would further help the running game by forcing backside defenders to stay at home. But no matter who is under center, DJ is a stud that totaled 1,386 yards and ten touchdowns last year playing behind a sub-par offensive line on the worst team in the league. Look for Johnson to bounce back with at least two or three more years of top-level production that can help you capture a fantasy title.

September to November wasn’t fun for Derrick Henry owners, but those who wisely stuck with him based on talent were rewarded in a big way during the fantasy playoffs. Henry’s 25.2 standard fantasy points per game from Week 14 to Week 17 single-handedly won leagues, and I would be shocked if Tennessee somehow doesn’t feature him in 2019 after rushing 97 times for 625 yards (6.4 YPC) and eight touchdowns in December. The former Heisman winner is simply a monster that has home-run speed as a runaway train on the second level, and he hasn’t taken the punishment or handled the workload that might impact some other big runners later in their career. Henry would have a case to be in the top three if guaranteed 20+ touches per game, but there is a sliver of doubt considering the Titans needed 13 weeks to realize how good he was last year.

A case could also be made for Alvin Kamara being higher than this as Mark Ingram heads into free agency, but New Orleans would surely add a backfield compliment to their prized dual-threat. Through two seasons, Kamara has totaled 1,611 rushing yards, 22 rushing touchdowns, 1,535 receiving yards, and nine receiving touchdowns, showing superb contact balance and burst with the ball in his hands. Besides being nearly unstoppable on option routes with Drew Brees distributing passes, Kamara has shown a nose for the end zone—he quietly totaled 18 scores in 2018—and we might see him fully unleashed by Sean Payton as the Saints try to get over two heartbreaking playoff losses in a row. Particularly in PPR leagues, there probably isn’t a more frustrating guy to face, which is all the more reason to get him on your dynasty squad.

Sony Michel was destined for fantasy superstardom when New England drafted him in the first round of the 2018 NFL Draft, and he will probably be the feature runner for the remainder of Tom Brady’s career (his rookie deal runs through Brady’s age-45 season). That will lead to plenty of production for the former Georgia standout, who will only gain more trust from the coaching staff as his career progresses. If Michel can improve as a receiver to tap into some of James White’s work in the passing game, he will need to be treated as midrange RB1 in all formats. Plus, the Patriots opening the offense back up into a spread attack wouldn’t be a problem for Michel, who would likely be even better running out of the shotgun against lighter boxes.

There probably isn’t a bad spot to be picking in a dynasty startup draft, as owners could potentially double up on two of these final three options. James Conner might have been on his way to a 20-touchdown season before suffering a high-ankle sprain in Week 13 that knocked him out until the finale (when he still was less than 100%), and he provided basically zero drop-off from 2017 First-team All-Pro Le’Veon Bell. Overall, Conner showed unrivaled determination as the engine of Pittsburgh’s offense, and he could easily outperform this ranking if the Steelers stick with primarily a one-back system in 2019 and beyond. If not, the Pitt product is still assured of a substantial role as the starter ahead of Jaylen Samuels, and he could lead a more run-centric attack with Antonio Brown leaving town.

Even after missing two games with a knee injury, Joe Mixon finished as the AFC’s leading rusher last season at 22-years-old, turning 237 carries into 1,168 yards (4.9 YPC) and eight touchdowns. A smooth, well-rounded player that carried Cincinnati when A.J. Green and Andy Dalton were lost for the season, Mixon offered high-floor RB1 value in 2018, and there’s no reason to expect that to change in what will hopefully be an improved squad under new head coach Zac Taylor. The Bengals are going to use their star runner how Todd Gurley is used in Los Angeles, which should obviously excite fantasy owners. In general, Cincinnati being more competitive under Taylor would help Mixon avoid negative game scripts to lift both his floor and ceiling.

I was higher than anyone on Nick Chubb entering the league as a draft prospect and then in Cleveland as a fantasy option, and he’d probably be ranked in the 3-6 range if the Browns didn’t sign Kareem Hunt last week. That said, this could be a prime buy-low opportunity for Chubb, who finished as the RB15 in standard leagues despite seeing just 16 touches over the first six weeks of his rookie campaign, especially if Hunt is handed a lengthy suspension or never “gets it” as a member of his hometown team. On the field, I think Chubb is a better player than Hunt anyway, and the Browns are an above-average left tackle away from building arguably the best offensive line in the league. Chubb is a humble, throwback runner that should provide years of solid RB1 value.

These positional dynasty rankings are limited to a top 12, but for extended, in-depth advice that you won’t find anywhere else, get Fantasy Consigliere now… It’s an offer you can’t refuse.