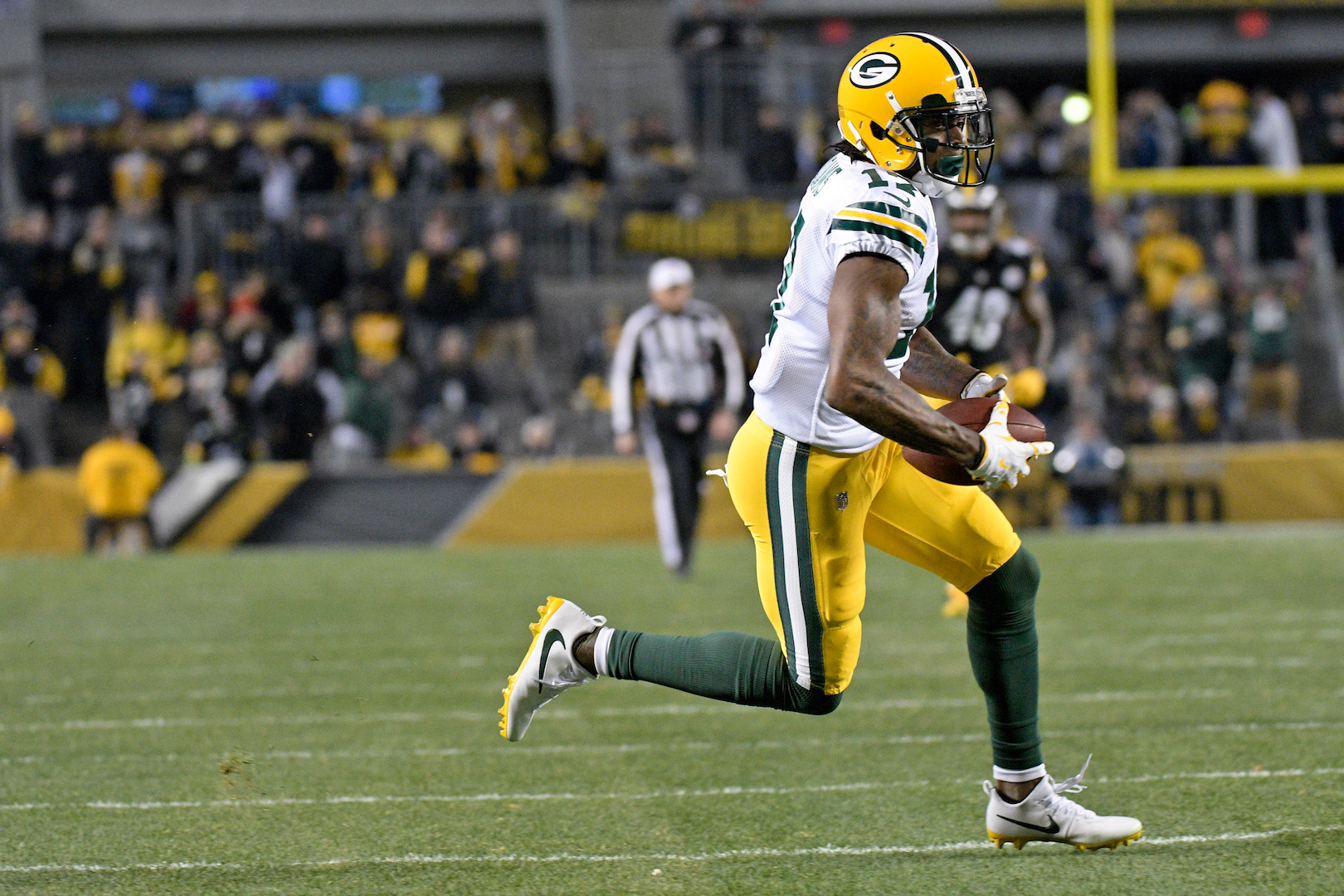 
Trying to upgrade your receiving corps in a dynasty league this offseason? Following up my ranking of the best quarterbacks and running backs in dynasty leagues, here are my top receivers for 2019 and beyond. As stated for the other positions, this includes quite a bit of projecting (free agency and the draft haven’t even happened yet), but savvy owners should be able to upgrade with this list and help from Fantasy Consigliere. [Note: age at the start of the 2019 season is listed in parenthesis]

This might come as a surprise, but JuJu Smith-Schuster is every bit worth the overall WR1 ranking in dynasty leagues. I’d even take it a step further and say that JuJu’s youth and consistency gives him a legitimate case to be the second best fantasy asset in the league (behind Saquon Barkley). Last year, Smith-Schuster finished with an 111/1,426/7 line despite not turning 22 until late November, and he will be the clear focal-point of Pittsburgh’s passing attack following the imminent trade of Antonio Brown. Even if the Steelers decide to rely more on the running game, Smith-Schuster will almost certainly be more involved in the red zone, and he should no longer disappear for short stretches once Brown—who was often over-targeted to boost his numbers—is playing elsewhere. Smith-Schuster should be a no-doubt WR1 for the next decade.

Particularly in Andy Reid’s offense, Patrick Mahomes and Tyreek Hill are a dream duo for the fantasy owners that own them—and a nightmare for those who don’t. “Cheetah” has made huge strides every year as a true wide receiver, increasing his receptions (87), yards (1,479), touchdowns (12), and yards per reception (17.0) to career-highs across the board last season, also chipping in 151 rushing yards, a rushing touchdown, and a punt return touchdown for good measure. Fans have to hold their breath every time Hill gets his hands on the ball or gets behind the defense, as all it takes is one play for him to suddenly turn the tides of a fantasy matchup. Having just turned 25 on March 1, Hill is also the second youngest player on the list, so I don’t see his speed declining for at least a handful of years.

The numbers speak for themselves when it comes to Julio Jones’ greatness, as his 96.7 receiving yards per game ranks first in NFL history, and he’s the only player to ever record five consecutive seasons of 1,400+ receiving yards—a streak that he will almost certainly extend to six or more if he stays healthy. From a fantasy perspective, the knock has always been a lack of touchdowns, but Julio had eight scores over the final nine games last year, and if he and Matt Ryan carry that run into 2019, watch out. Plus, besides being an all-time great weapon in the passing game, Jones is an A+ teammate that does work as a blocker and won’t complain about a lack of targets, which unfortunately is the exception rather than the rule nowadays. At worst, we should expect a couple more years of top-tier productive for Jones, who has played in all but three games over the past five seasons.

Whether or not Odell Beckham Jr. is traded this offseason, he will likely be fed targets as one of the most talented receivers in the league. While the 26-year-old has slowed down over the past two years due to injury, OBJ started his career with lines of 91/1,305/12, 96/1,450/13, and 101/1,367/10 as an elite game-breaker that could just as easily take a slant to the house as he could get behind the defense with a double move for six. The big plays haven’t quite been there recently (just one reception of 50+ yards—a 51-yarder—since the start of 2017), but Beckham will hopefully be healthy and focused for whichever team he suits up for next fall. It should be noted that San Francisco would be the ideal potential landing spot as the X in Kyle Shanahan’s offense, but Cleveland might not be an upgrade over New York due to Baker Mayfield’s desire to spread the ball around, which is worth keeping in mind.

The connection with Deshaun Watson has been great, but what really makes DeAndre Hopkins an attractive fantasy option is his ability to put up numbers no matter who is under center for Houston. A lot of that has been due to the offense constantly funneling through him, but fantasy owners don’t care about efficiency, so Hopkins is about as safe as it gets in the WR1 ranks. Once the Texans are able to build up the offensive line, we might see an even deadlier passing attack, but Hopkins isn’t higher than this because Watson might not lock onto him quite as much in 2019 with Will Fuller (knee) returning and Keke Coutee getting more involved. Overall, Hopkins is a matchup-proof, high-floor option that you can set-and-forget for 16 weeks.

One of my bold predictions for last season was that Davante Adams would catch 18 touchdowns, but I’m sure he (and fantasy owners) were happy with 111 receptions for 1,386 yards and only 13 scores, especially considering Aaron Rodgers was playing at less than 100% all year. A new offensive system under Matt LaFleur shouldn’t have much of an impact one way or the other in regards to Adams’ production, as he should still be one of the league’s best weapons in scoring territory, and his prime years should all come with Rodgers under center. I think getting a speedster like Oklahoma wide receiver Marquise Brown or free agent John Brown across from Adams would really help from both a real-life and fantasy perspective.

For now, the Saints are in good shape at quarterback, but with Drew Brees nearing the end at 40 years old, I don’t think it would be a bad idea for fantasy owners to put out feelers on Michael Thomas to see if they could get multiple future assets or another star player in return. New Orleans ran their passing attack through Thomas more than expected last season, but if health cooperates and the team potentially adds weapons at receiver and/or tight end, I think Brees will go back to being more of an equal-opportunity passer. Of course, Thomas is talented enough to take it to another level by reaching double-digit scores for the first time in his career next year, but I feel better about the wideouts above him in terms of a multi-year investment. If you can straight-up trade Thomas for JuJu, for example, I’d do it in a heartbeat.

Coming off his third consecutive 1,000-yard season despite playing on his third different team over that span, Brandin Cooks is finally going to stay in the same system—and it’s certainly a good one with Sean McVay calling plays and Jared Goff throwing passes. The dynamic deep threat had a career-high 1,204 receiving yards last year, and the numbers should only improve as the offense matures and the offensive line gets better in pass protection to allow Cooks to get downfield more often. Before the Rams started to struggle in December, Cooks averaged 12.5 standard fantasy points per game in ten healthy appearances (which would have ranked as the WR6 on the year), and optimistically, he projects to catch more than five touchdowns in 2019. If Los Angeles allows Goff to fully unleash a downfield attack, Cooks will have as much upside as anyone over the next few years.

Last year, it didn’t take long for T.Y. Hilton and Andrew Luck to pickup where they left off in 2016, as one of the league’s top duos connected 76 times for 1,270 yards (16.7 average) and six touchdowns in the regular season, and then followed it up with lines of 5/85 and 4/60/1 in the playoffs. There is slight pause here because T.Y. turns 30 in November and is reliant on speed to make an impact, but we saw no signs of decline from the four-time Pro Bowl receiver, and he had at least 50 yards and/or a score in all but one game during his age-28/29 campaign. Also, defenses won’t be able to focus on Hilton with the Colts possibly primed to select a quality possession receiver in this year’s draft—not to mention Deon Cain (knee) should be ready to make an impact. Overall, Hilton has a very high floor for the season and always carries week-winning upside.

It’s fair to be skeptical about Mike Williams cracking the top ten because he doesn’t even have a 700-yard season under his belt, but this is all about projecting for the future. Williams basically disappeared for long stretches last year, and he still finished with ten touchdowns while averaging a healthy 15.4 yards per reception on 43 grabs. Now, it sounds like impending free agent Tyrell Williams will be headed elsewhere when he reaches the open market, so the Chargers will be relying on the Clemson product to step up and reach his full potential as the No. 7 overall pick of the 2017 NFL Draft. As a full-time player, I expect Williams to be a Dez Bryant-like contributor that could breakout for 1,300 yards and 13 scores as a dominant perimeter target in the Bolts’ high-powered offense.

I thought about giving Chris Godwin a spot on the list, but with Bruce Arians wanting to keep DeSean Jackson around, he still isn’t a lock to be featured in 2019, which would be a disappointment. Instead, Mike Evans—who is obviously not going to leave the field much—should benefit from Arians’ aggressive aerial attack. Remember, Evans was basically unstoppable as a deep threat at Texas A&M, and although we’ve seen some of that in the league (including last year with a career-high 17.7 yards per reception), Arians will likely take it to another level. Not turning 26 until the summer, Evans should have several seasons of big-time production ahead of him. Plus, for all his struggles, it isn’t like Jameis Winston is a below-average thrower, so any turnover issues that don’t go away under a new regime shouldn’t really affect Evans. If not for the presence of Godwin, Jackson, and O.J. Howard, he would be higher than this.

Several other options could have made a case for one of the final three spots on the list (Keenan Allen, Stefon Diggs, Adam Thielen, and Kenny Golladay are notable names to mention), but A.J. Green is a true superstar when he’s on the field. Personally, Green has broken my heart on more than one occasion by going off when I face him, but you have to respect how he goes about his business by dominating without letting people know about it, and that seems to be a reason he’s often undervalued as a fantasy option. The former No. 4 overall pick is the oldest player on the list, but he wins with route-running and natural receiving skills more than speed and athleticism, which should allow him to remain an elite option in Zac Taylor’s offense. And similar to Mike Evans, any potential struggles at quarterback with Andy Dalton under center isn’t a huge concern due to the chemistry between a pair that entered the league together in 2011.