WOLF SPORTS ALERT There may be temporary login issues due to site maintenance. Thank you for your patience!
Home / frontfantasy / Fantasy Football Stock Report: November 20, 2018 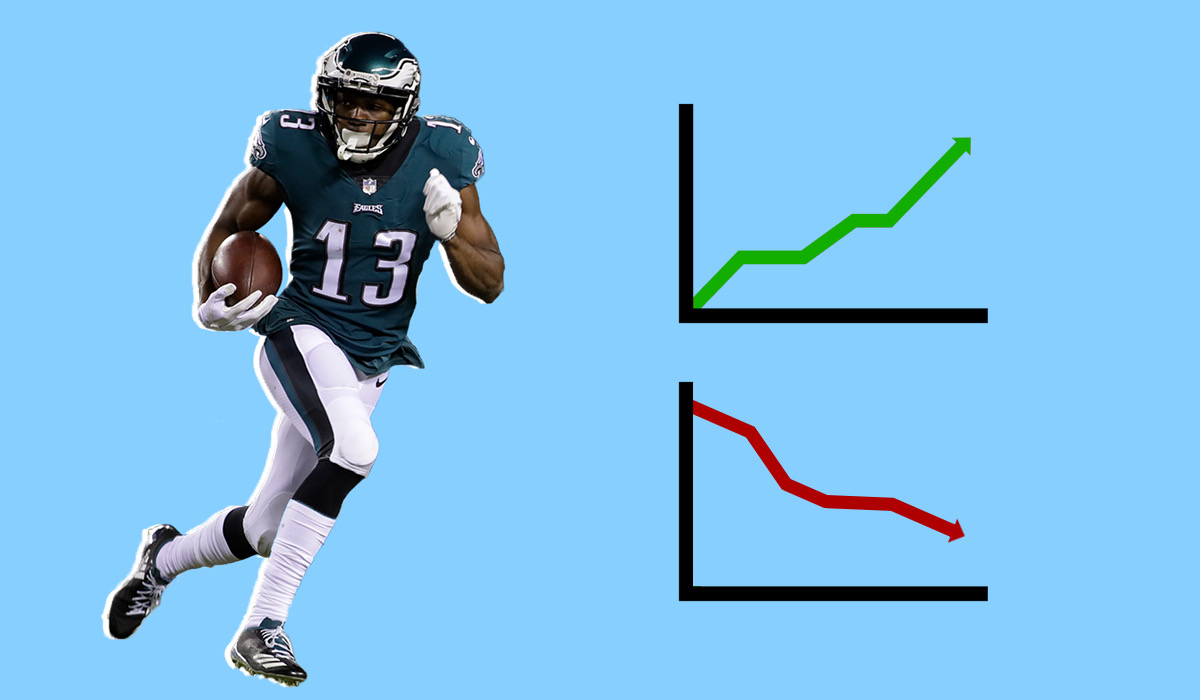 
Box scores never tell the whole story, so which fantasy options are rising and falling heading into Week 12? If you want to completely dominate your league, consider Fantasy Consigliere for premium analytics and next-level advice for all your leagues, all year long.

He didn’t even find the end zone through the air or on the ground, but Lamar Jackson still had 15.7 fantasy points in his first career start, going 13-of-19 for 150 yards and an interception as a passer, also adding 27 carries for 117 yards as a runner. The unmatched rushing production from Baltimore’s first-round signal-caller makes him worth a pickup in all leagues as a potential QB1 down the stretch, as Jackson is a threat to rush for 100 yards and/or multiple scores in every game until Joe Flacco (hip) returns. Also, the fact that Robert Griffin III barely saw the field and didn’t even touch the ball bodes well for Jackson’s floor.

After a string of 21+ fantasy points in every outing from Week 2 to Week 5, Deshaun Watson has been held below 20 points in four of the past five games, averaging 14.4 fantasy points over that span. Notably, the only performance with more than 20 points came when Will Fuller went for 5/124/1 back in the final game of October, so the Philadelphia native not being on the field as an elite deep threat has capped Watson’s upside a bit.

There was no telling how Seattle’s backfield would shake out last week, but Chris Carson was immediately re-installed as the starter, rushing 17 times for 83 yards and a touchdown in a big win against the Packers on Thursday Night Football. Pete Carroll could change his mind at any given moment, but Carson is suddenly back on the RB2 map after it looked like he would be just a risky FLEX option the rest of the way. The only tough draw left on the schedule comes in Week 14 against the Vikings.

The game got out of hand early, but Josh Adams is clearly the lead back for Philadelphia right now, and he was able to turn seven carries into 53 yards and a score on Sunday against New Orleans. The Notre Dame product, who is averaging 6.1 yards per carry this year, would really benefit from Doug Pederson deciding to commit heavily to the running game in order to take the pressure off Carson Wentz, and the Rams are probably the only team left that might blow out the Eagles to tilt the game script against Adams.

Alex Collins has scored in three-straight games, and it looked like he was well on his way to a big game when he capped off Baltimore’s opening drive with a touchdown run on Sunday; however, it was mostly undrafted rookie Gus Edwards (17 carries for 115 yards and a touchdown) handling the backfield work after that, and Collins finished with just seven attempts for 18 yards. I think the Ravens feel more comfortable with how Edwards plays as a north-south grinder to pair with Lamar Jackson’s speed on outside runs, so Collins is a very risky FLEX despite eight total scores through ten games.

Since the Titans decided to make Dion Lewis their lead back, he has rushed 49 times for 143 yards (2.9 YPC) and no scores, while Derrick Henry has rushed 26 times for 131 yards (5.0 YPC) and three touchdowns over the same span. I think if the Titans want to make a move in the AFC South after a tough loss against the Colts, they need to feature Henry down the stretch, which was successful during last year’s end-of-season run. Maybe Tennessee won’t realize it because they haven’t yet, but Henry is better with more carries, and Lewis is better as a change-of-pace option and weapon in the passing game.

Doug Baldwin scored for the first time this season in Thursday night’s win over the Packers, and like we’ve seen with Julio Jones, the touchdowns could come in bunches now. I’m always lower on Baldwin than most, but Seattle targeted him twice on back-to-back plays in the end zone, so Russell Wilson will likely continue relying on his most trusted receiver as the Seahawks look to make a run for a wild card spot. Baldwin isn’t a WR2 in my opinion, but his FLEX footing is much solider compared to this time last week.

While Denver’s passing attack was quiet for most of the game in Week 11, they came alive late thanks to a couple receptions of 30+ yards by Courtland Sutton, including a play that set up the team’s game-winning field goal as time expired. I think Case Keenum will have more confidence in the second-rounder after their clutch connections, and Sutton has done nothing to be downgraded from low-end WR2/FLEX expectations since the Demaryius Thomas trade. Plus, the Broncos get some very favorable matchups over the final six weeks of the season.

It sounded like the Ravens might give Robert Griffin III some action at quarterback by splitting snaps with Lamar Jackson, but that didn’t happen, and it probably hurt John Brown more than anyone because RGIII has one of the best deep balls in the NFL. For as long as Jackson plays 60 minutes under center, “Smokey” is a risky fantasy option that might need a busted coverage to be worth a start, as the dual-threat rookie prefers to throw between-the-numbers.

There was hope that Nelson Agholor would be more involved as a downfield threat with Golden Tate now on the roster, and that came to fruition in a couple weeks ago against Dallas with five receptions for 83 yards, including a 51-yard reception. In New Oreans, though, Agholor’s floor was on display with zero catches on two targets, and one of his looks came on a wildly accurate deep ball by Carson Wentz into double coverage as the Eagles put up just seven points. The USC product is probably best viewed as a volatile FLEX the rest of the way.