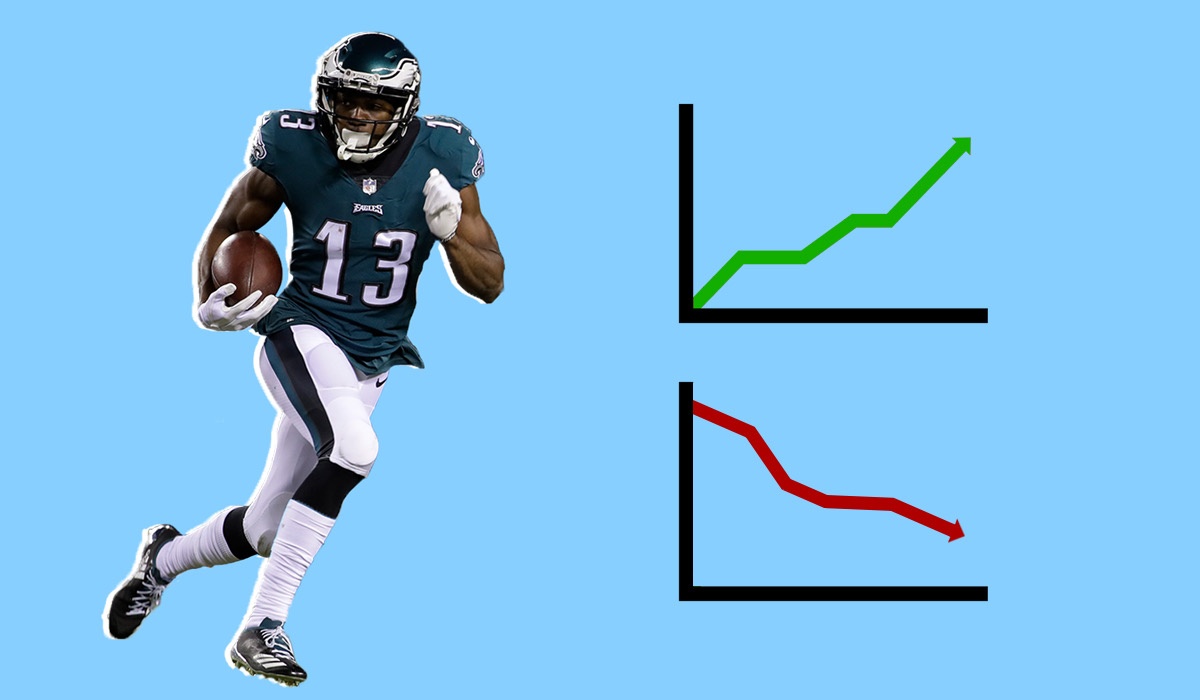 
Box scores and statistics never tell the whole story, so who saw their stock rise or fall after one week of regular season action? Look for the Fantasy Football Stock Report on each Tuesday over the next four months, and take your game to the next level with Fantasy Consigliere.

He only completed 15 passes against the Chargers, but more than 25% of them resulted in a touchdown for Patrick Mahomes, who really benefitted from Andy Reid’s creative offense in Week 1. While the second-year dual-threat might have some growing pains, he and the Chiefs exploded with four scores through the air without even getting Kareem Hunt, Sammy Watkins, or Travis Kelce involved, which is a scary thought. Mahomes has weekly top-five upside.

We shouldn’t overreact to one game, but the Cardinals were completely dominated on both sides of the ball on Sunday, and Sam Bradford didn’t have much help outside of Larry Fitzgerald and David Johnson. Anyone that watched the opener could see that Bradford was very accurate for the most part, but he was often throwing into tight coverage for short gains or incompletions. Things won’t get easier next week against the Rams, and it doesn’t matter who Arizona faces if they can’t get guys open.

The Steelers only tied against the Browns, but I’m not sure that holdout Le’Veon Bell earned any money by allowing his backup to go off with 36 touches for 192 total yards and two scores. James Conner looks like the real deal, and he should be a top-tier RB1 play until if/when Bell returns, which doesn’t appear to be happening any time soon.

Stock up: Adrian Peterson, WAS

Even in his age-33 season, people shouldn’t doubt Adrian Peterson, who rushed rushed 26 times for 96 yards and one touchdown in his Redskins debut, also adding two receptions for 70 yards. He doesn’t have the acceleration that he once did, but AD is still a violent runner with good speed, and he’s running behind an elite offensive line. Get Peterson in lineups as he continues to climb the NFL all-time rushing leaderboard.

It could be a long year for LeSean McCoy and the Bills, as they were blown out 47-3 in Baltimore over the weekend, and McCoy rushed for just 22 yards on seven carries. Not being able to block on the interior can derail a season quickly, and it looks like that’s the case in Buffalo. Right now, McCoy can’t be relied upon as anything other than a low-floor FLEX option with matchups against the Chargers and Vikings over the next two weeks.

Blount drew the start in the season opener, but he rushed just four times for negative-three yards as the Lions got destroyed at home, 48-17, in front of a national audience. Kerryon Johnson (five carries for 17 yards) wasn’t able to separate himself in the box score, but the rookie is clearly the best option Detroit has, as Blount looked a bit sluggish on limited touches. He doesn’t need to be owned in 10- or 12-team leagues.

Phillip Dorsett was probably the most overlooked breakout candidate of fantasy drafts, but he is already taking advantage of an extended role in New England with a 7/66/1 line in the opener. The former first-round pick has caught seemingly everything that Tom Brady’s thrown his way since joining the team last year, so he should continue to have his quarterback’s trust. Next week against Jacksonville is an imposing matchup, but Dorsett should be rostered in all leagues.

If the Colts are going to be throwing it 50+ times a game, then some wide receivers are going to need to step up behind T.Y. Hilton. In Week 1, it was Ryan Grant, who caught nine passes for 59 yards as a reliable target underneath for Andrew Luck. I think the former Redskin is one of the top waiver wire claims of the week in PPR formats, as Indy faces some beatable secondary groups over the next few weeks.

Alshon obviously didn’t even play in the opener, but it sounds like he might miss more than the two weeks that was previously the hope after expressing some frustration last week, saying “a shoulder injury is pretty tough” and nodding when asked if he is going miss a few more weeks. While he avoided the PUP list heading into the season, it now wouldn’t be surprising to see Jeffery miss about six games anyway.

Coming off a one-catch, ten-yard performance on Sunday, Kelvin Benjamin won’t have an easier matchup in Week 2 against the Chargers or Week 3 against the Vikings, especially considering we don’t even know who will be under center for the Bills. KB could struggle to put up numbers all year if the interior offensive line is unable to hold up to give Josh Allen or Nathan Peterman time to find him downfield. He is a risky play for the rest of the month.

This isn’t even about the stat line (two receptions for eight yards) in the opener, as for the remainder of the year, Jimmy Graham will probably be impacted more than anyone by an immobile Aaron Rodgers. I expected a lot of production on broken plays for the six-foot-seven tight end—particularly on jump balls in scoring territory—, but that might not be the case if Rodgers is forced to stay in the pocket. Graham is suddenly a low-end TE1.

Perhaps the most frustrating usage of the week came for David Njoku, who was used more like an H-back than the dynamic receiving tight end that he is. Hopefully it was just a game-plan specific thing due to the weather, but Njoku will struggle to reach his potential if he’s limited to checking and releasing all season long. The 2017 first-round pick will look to win some one-on-one matchups against New Orleans in Week 2.