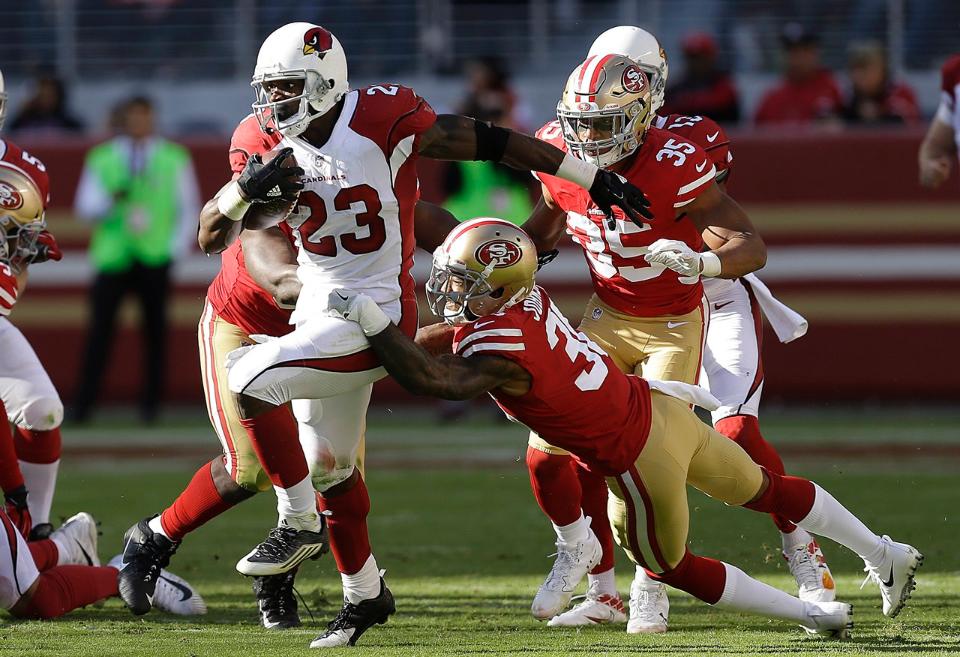 Jared Goff started off hot this season before a short cold stretch, but he should stay scorching for the rest of the season after throwing for 311 yards and four scores on just 14 completions in Week 9. It’s also worth noting that the three-game stretch that gave him problems were against the Seahawks, Jaguars, and Cardinals. Besides the Vikings and Seahawks again, Goff has cupcakes the rest of the way.

Not only has Winston not taken the step many expected him to in 2017, he’s still shown some serious immaturity issues and poor decision-making as a passer. Now, he’s out for a few weeks to heal up his shoulder injury. I don’t think he should be owned in redraft leagues.

Carolina finally committed to McCaffrey as the team’s main ball-carrier in their win over the Falcons, and he impressed with 66 yards and a touchdown on 15 attempts. The rookie is averaging six receptions per game and looks like he could push for 20-25 weekly touches down the stretch.

Part of the reason why McCaffrey saw 15 carries on Sunday was probably Stewart’s fumbling issues, as he put the ball on the ground twice on 11 attempts. The veteran won’t be completely phased out, but the Panthers should give McCaffrey more carries at his expense.

Adrian Peterson basically punched Father Time in the face when he set a career-high in carries with 37 of them against San Francisco, and Arizona is going to rely on him to literally carry them until Carson Palmer’s return from a wrist injury. “All Day” should be a fantasy monster down the stretch.

It’s probably only a matter of time before second-year back Devontae Booker takes over as the starter for Denver, as Anderson is coming off his worst game of the season with nine carries for 13 yards. If he doesn’t produce against New England on Sunday night, it might be time to cut him loose.

The lone bright spot of the Broncos’ blowout loss to the Eagles was they finally got Demaryius Thomas involved and into the end zone, as Brock Osweiler targeted him underneath like we haven’t seen so far this season. Hopefully that continues for fantasy owners.

A world without Deshaun Watson isn’t one that Will Fuller wants to live in, as after seven touchdowns in four games with the rookie, he had just 32 scoreless yards in the first game with Tom Savage at quarterback. Fuller is suddenly a borderline bench player after looking like a high-upside WR2.

We’ll see if Watkins can keep it up after a 67-yard bomb from Jared Goff in Week 9, but they two have had opportunities that they just haven’t connected on as frequently as they (and fantasy owners) would like. One play can do wonders for chemistry and confidence, though, and teams could start deciding to single Watkins with the rest of the offense going off every week.

Jordy Nelson was a part of arguably the best QB-WR duo in the league, but having Aaron Rodgers out of the lineup is really hurting the 32-year-old receiver. Nelson has combined for five receptions and 48 yards over the past two weeks, so he should be downgraded to a low-end WR2/FLEX.