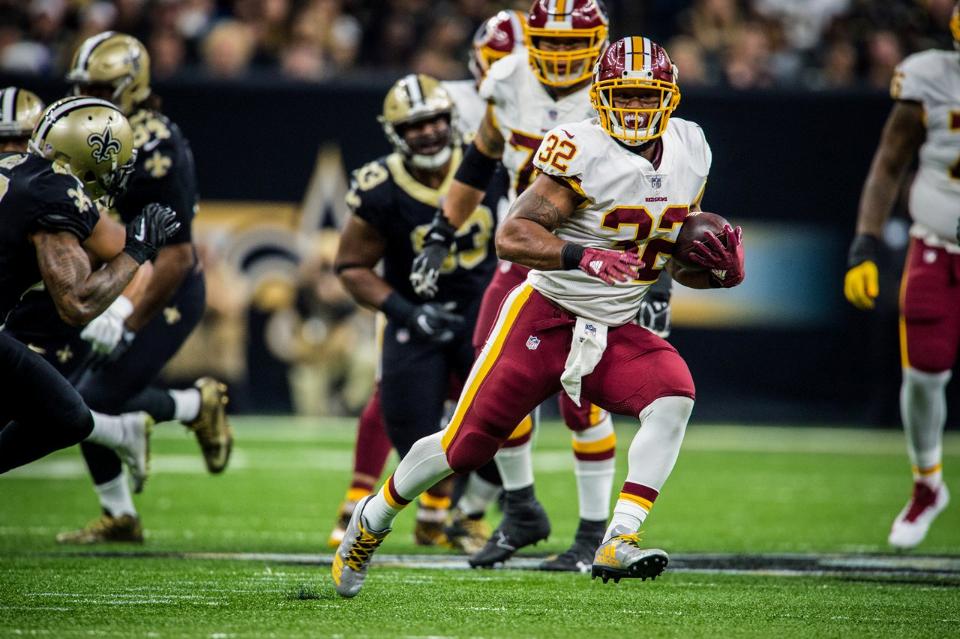 Keenum has been a great streaming option in recent weeks, but Teddy Bridgewater’s return put him at risk of an in-game benching. However, after a huge win over the Rams, the wheels would really have to fall off for Keenum to be benched. He’s a lot safer to consider for fantasy lineups than he was just a week ago.

Perine should have a featured role down the stretch with Rob Kelley and Chris Thompson both done for the season. He had his best game of the season with 23 carries for 117 yards and a score against the Saints, and he could provide RB2 value over the final six games of 2017.

It’s rare to have a guy score in three-straight games and find himself as a faller, but Ameer Abdullah handled just 55% of the running back carries in Detroit’s win over the Bears, and Theo Riddick was more effective on his nine attempts. Abdullah is still the top fantasy option in the backfield, but his stable floor takes a hit if he stays below 15 touches per game.

Booker received a season-high 19 touches in Sunday’s loss to the Bengals, and his workload should stay there for the 3-7 Broncos, as they need an offensive spark. As a rookie, Booker had a six-game stretch where he handled 20.5 touches per game, and Bill Musgrave taking over as offensive coordinator could be good news for the second-year back.

White was held without a reception for the first time since October of 2015 in last week’s win over Oakland, as Dion Lewis and Rex Burkhead are handling a significant amount of backfield work for the Pats. He should be more of a factor on Sunday against the Dolphins, but White isn’t the RB2 in PPR leagues that we thought he was just a few weeks ago.

Robert Woods is going to miss some time with a shoulder injury, and that will open up looks for Watkins. He could be a high-upside WR2 into and through the fantasy playoffs with a larger role and an easy schedule.

It looks like first-round pick Mike Williams may have taken over opposite Keenan Allen as Philip Rivers’ number-two receiver, as the rookie caught five passes for 38 yards in Sunday’s win. Considering Tyrell Williams has five receptions over the past four weeks, it’s probably safe to drop him if he’s been on your bench.

Not many receivers have had success against Jacksonville this year, but Corey Coleman was able to come away with six receptions for 80 yards on Sunday in his first game action since Week 2. A first-round pick in 2016, Coleman was targeted 11 times in Week 12, and he could be a difference-maker down the stretch.

No one is missing Jameis Winston (shoulder) more than Cameron Brate, as the talented tight end has totaled three receptions for 31 yards over the past three weeks. I think he can be dropped in standard-sized leagues.