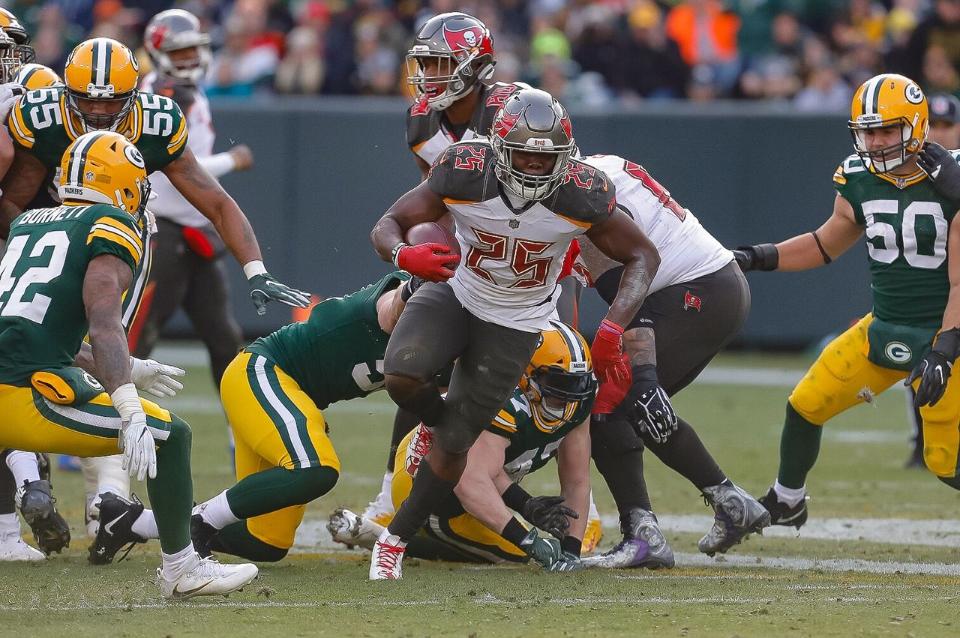 Heading into Week 13, Green Bay was 1-4 in Brett Hundley’s starts, and they also lost against Minnesota when he was forced into action. However, after a near win over Pittsburgh two weeks ago, Hundley led the Packers to an overtime victory on Sunday, putting them right into the thick of the playoff race. If Green Bay can beat the winless Browns this week, hopefully Aaron Rodgers’ scan checks out and he can return against Carolina in Week 15. Somehow available in nearly half of ESPN leagues, Rodgers needs to be picked up as a potential elite QB1 down the stretch.

Another NFC North quarterback that some may have been stashing is Teddy Bridgewater, but after the Vikings beat the Rams and Falcons in back-to-back weeks, there’s almost no chance Teddy B becomes the starter for Minnesota. Keep him in dynasty formats, but there’s no reason to roster Bridgewater in redraft leagues.

Burkhead has touched it 15 times in each of the past two weeks, and that’s all he needs in a Tom Brady-led offense. The bald-headed back could be in for a bigger role in Week 14 with Rob Gronkowski suspended, so he should be started in all leagues.

Tevin Coleman really impressed in two starts when Devonta Freeman was out with a concussion, but the slight hope of him remaining the lead man in the backfield is already gone after Freeman handled more touches and gained more yards in his return. Coleman is still a solid play, but he won’t be a RB1 in the fantasy playoffs.

Through the first 11 games of the season, Tampa Bay failed to have a 100-yard rusher between Doug Martin and Jacquizz Rodgers, but in Week 13, it was little-known Peyton Barber who emerged with 102 yards on 23 attempts. The 23-year-old is worth picking up for those who need running-back help, and he gets a good matchup with Detroit this week.

Speaking of Detroit, they had a running back of their own emerge in Week 13 when Tion Green rushed for 51 yards and a touchdown in his NFL debut. There was nothing Ameer Abdullah (neck) could do about it as he was inactive in street clothes, but he will likely return to a full-blown committee with Green and Theo Riddick.

So, Josh Gordon looked like himself when he hit the field for the first time since 2014, as he caught four passes for 85 yards against one of the NFL’s best cornerback groups. Rookie quarterback DeShone Kizer doesn’t seem shy about targeting Gordon, so the former superstar receiver could be a difference-maker over the next four weeks.

The Broncos offense was tough to watch in Week 13, as Trevor Siemian was uncomfortable and inaccurate against Miami. Demaryius Thomas didn’t have a reception until very late in the game, and he probably won’t have much success in Week 14 and beyond if Siemian remains the quarterback, which head coach Vance Joseph said will be the case.

Outside of a 106-yard, two-touchdown game in Week 3, things didn’t go great for Watkins for the first seven weeks of the season, but he’s scored in four-of-five games since then, and now gets some really good matchups for the fantasy playoffs. As long as Robert Woods (shoulder) remains out, Watkins has a more stable floor to go along with his great upside.

DeVante Parker looked like he was going to live up to the offseason hype at the beginning of the year, but since injuring his ankle, he just hasn’t been the same. The 24-year-old has been held to five yards in each of the past two games (versus New England and Denver), and now he faces the Patriots again in Week 14. You should keep Parker around, but he should be on the bench for now.