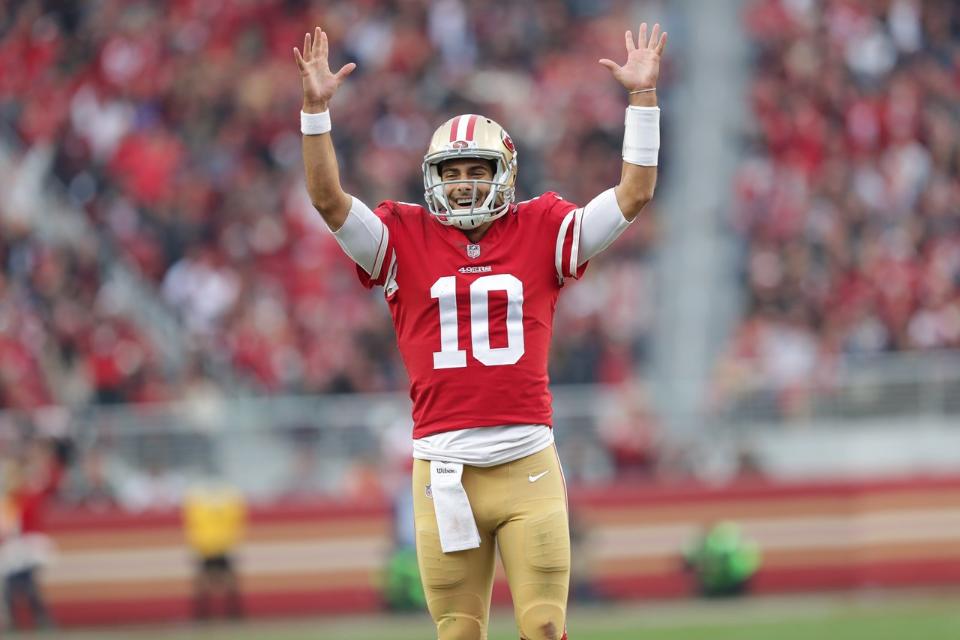 So, um, Jimmy Garoppolo just put up 44 points on the Jaguars, and he’s now thrown for 1,250 yards in four starts with San Francisco, all of which have been wins. No matter what happens against the Rams in Week 17, Garoppolo has some great momentum to carry into 2018, but for those currently seeking a fantasy title, he’s a definite QB1 option.

This is not by the fault of Smith, but fantasy owner should avoid him on Sunday with the Chiefs locked into the #4 seed in the AFC. Even if Smith starts, it’s unlikely that he plays the entire game, so those who own him might actually be better off hoping that Patrick Mahomes gets the start so they can plug him into lineups if there are no other options.

DeMarco Murray still might be active with a playoff spot on the line, but his knee injury did not look good on Christmas Eve, so even if he does tough it out, Derrick Henry is the much better fantasy option against Jacksvonille. If you’ve owned Henry all year, this is the moment you have been waiting for.

Three fumbles in two weeks—including two at the goal line—is cause for concern when it comes to almost any running back, and that’s especially true when the backup (Tevin Coleman) is arguably the best change-of-pace in the league and has proven to be an elite option when he starts. It’s unlikely there are better options on the bench, but Freeman could carry some unusual risk for the final week of the regular season.

He only received five carries in last week’s win, but Thomas Rawls’ 15-yard run was the only attempt on the day that went anywhere for Seattle. Starter Mike Davis rushed 15 times for just 25 yards in the victory, and Pete Carroll could shake things up after Rawls provided a spark off the bench.

Like Alex Smith and the Kansas City players, this falling stock is by no fault of Fournette, but the Jags are locked into the #3 seed and are expected to rest their offensive centerpiece against the Titans. If so, T.J. Yeldon and Chris Ivory are both worth a look, and unless Jacksonville says Fournette will get 15-20 touches with a straight face (which won’t happen), he shouldn’t be considered at all.

It took a little bit to get going in an easy win against the Texans on Christmas, but JuJu Smith-Schuster was able to haul in a 49-yard catch and then a touchdown to live up to his lofty expectations in Week 16. The rookie receiver should finish strong as a WR1 with Antonio Brown out against Cleveland in the regular-season finale.

If there’s a team with nothing to play for that might still play their starters, it’s probably the Eagles. Still, Philadelphia did not look good at all on Christmas Night, and that included Alshon Jeffery with zero receptions on two targets against Sean Smith. Fantasy owners shouldn’t trust him for both performance and playing-time concerns on Sunday.

The most likely Eagle to sit in Week 17 would probably be Zach Ertz, as he already has built-in chemistry with Nick Foles from their first stint together in Philadelphia. If Ertz sits, that would open the door for Trey Burton to start and come through as a TE1.

Dez Bryant just isn’t very good anymore, so it’s hard to trust him no matter who plays for the Eagles on Sunday. It might actually hurt him to have the backups in there, as rookie corner Rasul Douglas has the size to matchup with Dez on the outside.