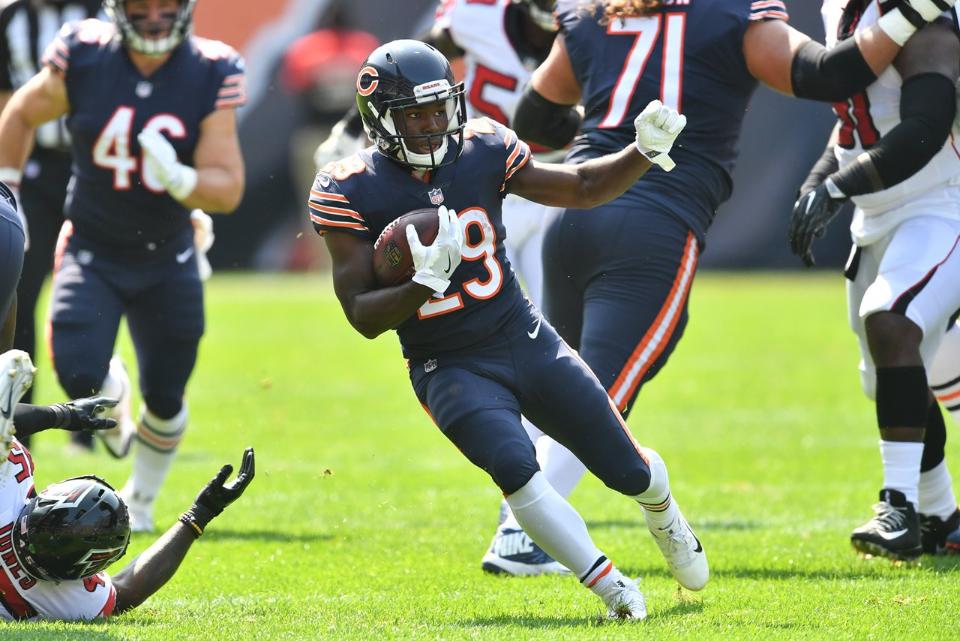 
Week 1 is in the books and it’s time for the weekly “Stock Report.” Now that actual games have been played, it’s easier to get a feel for which players are rising or falling.

Bradford was sensational in last night’s primetime matchup with the Saints, throwing for 346 yards and three scores. We have to keep in mind that it was against New Orleans, but it was a strong performance for the former first-overall pick.

There probably wasn’t a team in the NFL that had a worse Week 1 than the Cardinals, as Carson Palmer tossed three interceptions in a loss, and to add injury to insult, David Johnson could be out for the year after undergoing wrist surgery.

Anyone paying attention this offseason and preseason probably knows of “The Human Joystick,” but now the whole fantasy community should after his NFL debut of five carries for 66 yards and eight catching for 47 yards and a touchdown. With injuries ravaging Chicago’s receiving core, Cohen should remain a big factor and a strong PPR asset.

It was clear that Dalvin Cook was the starter, but it was surprising to see Latavius Murray as a clear #3 behind the rookie and Jerick McKinnon. When he finally entered the game, Murray proceeded to nearly lose a fumble on his first touch as a Viking. He might just be working his way back into game shape coming off offseason ankle surgery, but it was a disappointing Week 1 for the 27-year-old.

He only averaged 3.6 yards per carry on 18 attempts, but Jonathan Stewart is undoubtedly a key part of the Panthers offense. He also had two catches, including one for a touchdown, and shared the field with Christian McCaffrey at times. At 30-years-old, Stewart looks like he’s got a lot left in the tank and should handle about 15 touches per game at the very least, making him a strong FLEX option.

Well, the Peterson-Payton relationship didn’t seem to start off quite as smoothly as we would have liked. The Saints are going to use all three of Peterson, Mark Ingram, and Alvin Kamara, and it looks like AD might be third on the priority list. I wonder if a trade might be a possibility, as even though it was just one week, it seems like an awkward fit for both sides.

Last Thursday night proved that Danny Amendola will be Julian Edelman’s replacement in the Patriots offense, and that makes him a WR2 in PPR leagues. He did already suffer a concussion, but durability is the only knock on Amendola in his new role.

The struggles continued for the Redskins’ new-look offense in Week 1 against Philadelphia, and Terrelle Pryor was a big reason why. The tall receiver dropped a touchdown and looked out of sync with Kirk Cousins.

Nelson Agholor was a first-round pick in 2015, but hasn’t really lived up to that billing. That said, he got off to a good start for a third-year breakout with 86 yards and a touchdown against the Redskins, and he’s got a bunch of talent to be a force for the Eagles and fantasy owners.

Ugh. That was a brutal showing by the New York offense on Sunday night, and Eli Manning didn’t even give Marshall a chance to make a play downfield. Maybe Odell will open things up for everyone, but Marshall owners should be concerned.

Hooper is already more than 47% to reaching his rookie-year yardage total, as he caught two passes for 128 yards and a touchdown after having just 271 yards in 2016. The former Stanford tight end probably won’t find himself as open as he did on Sunday, but he’s a good add for those in need of help at the position.

Hunter Henry had zero targets in the Week 1 loss to the Broncos, and it looks like head coach Anthony Lynn sees him as a blocker more than a receiver. That’s shocking considering what Henry put on tape last year, but his stock definitely takes a hit.