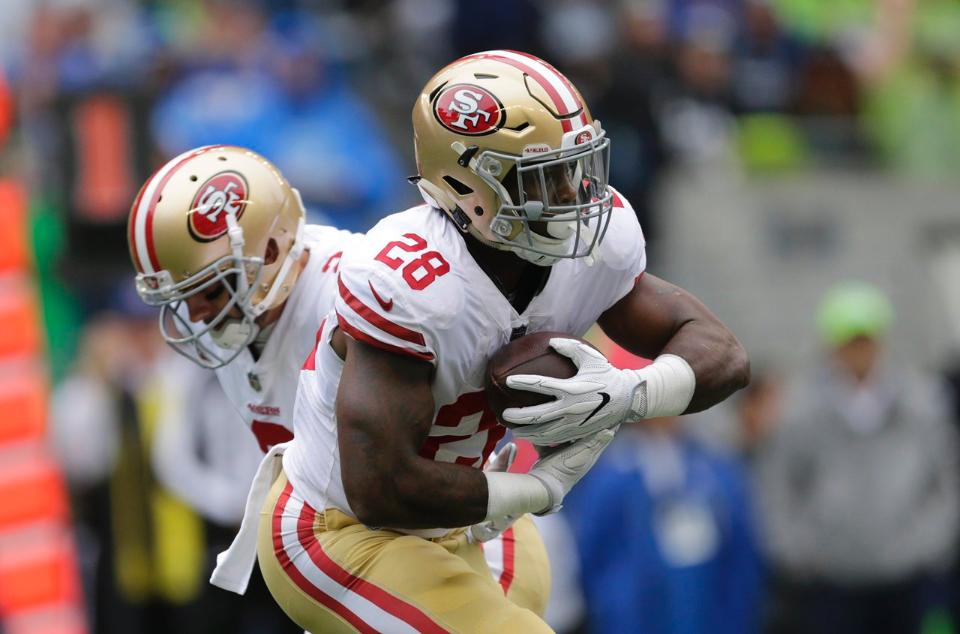 Cutler didn’t put up huge numbers in his Dolphins debut, but he looked really good. The rollout touchdown throw to Kenny Stills showed he still has superb arm strength, and the gunslinger has played his best with Adam Gase. Cutler looks like a solid streaming option, especially against the Jets in Week 3.

This is all about the offensive line, as Wilson has almost no hope with them protecting him. The weapons people were excited about (Baldwin, Richardson, Lockett, and Graham) won’t mean a thing if they can’t block long enough to get in a rhythm or hit them down the field.

Remember in the offseason and preseason when a lot of people were concerned about Carlos Hyde’s fit and role in Kyle Shanahan’s offense? I think he’s doing OK so far, including 124 yards on 15 carries in Seattle on Sunday. The only concern I had about him was the Niners not being good and playing from behind, but Hyde has been involved as a pass catcher so far.

Ineffectiveness and a talented (i.e. monster) backup isn’t a good combination, but Murray is averaging just 3.3 yards per carry through two games and Derrick Henry just ran through the strong Jacksonville defense as the starter battled a tight hamstring. Murray looks like a shaky low-end RB2 at the moment.

It’d be nice to see him more involved in the passing game, but Ameer Abdullah looked great on Monday night, handling 17 carries for 86 yards against a tough New York defense. He’s now got 18 and 17 touches in the first two games of the season and has established himself as a nice RB2 option.

If you didn’t know, Blount had zero carries in Week 2. Philadelphia has a great offensive line, but against the Chiefs, they basically abandoned the run for whatever reason. Darren Sproles led the team with 10 carries, and he looks like the only viable fantasy play for Philly’s backfield.

As John Brown battles various injury issues, J.J. Nelson stepped up with five catches for 120 yards and a touchdown against the Colts. That was after a five-catch, 43-yard performance in which he scored in Week 1, and Nelson could be in for some more good games with Brown’s status almost a complete unknown.

Pryor committed another drop in Week 2 and looks miscast as a #1 receiver in Washington’s offense. Don’t be surprised if Josh Doctson or even Ryan Grant are able to get more playing time at his expense.

With Corey Coleman out until November with a broken hand, the Browns need someone to step up as DeShone Kizer’s top target. Kenny Britt has just two catches through two games, while Higgins had eight receptions for 95 yards in his first appearance of 2017 on Sunday. If owning a Cleveland wideout is your thing, I think Higgins is your guy.

The longer Andrew Luck is out, the more T.Y.’s stock drops, which might go against conventional thinking because the closer he is to returning, the closer Hilton gets to being usable, but no one really knows when the quarterback will return. Luck has already been ruled out for Week 3, and fantasy is only a 13-week season, so Hilton is probably hurting a lot of teams right now.

Now that Antonio Gates’ quest for the tight end touchdown record is out of the way, the 0-2 Chargers should commit to Henry as a full-time player and main receiving option at tight end. The second-year player caught seven passes for 80 yards on Sunday after not being targeted in the opener.

Marty B hasn’t played well in either of the first two games to start the season, and Green Bay has two other tight ends in Lance Kendricks and Richard Rodgers that might get more playing time, not to mention three really good wide receivers that need targets. Bennett looks like a touchdown-or-bust option.