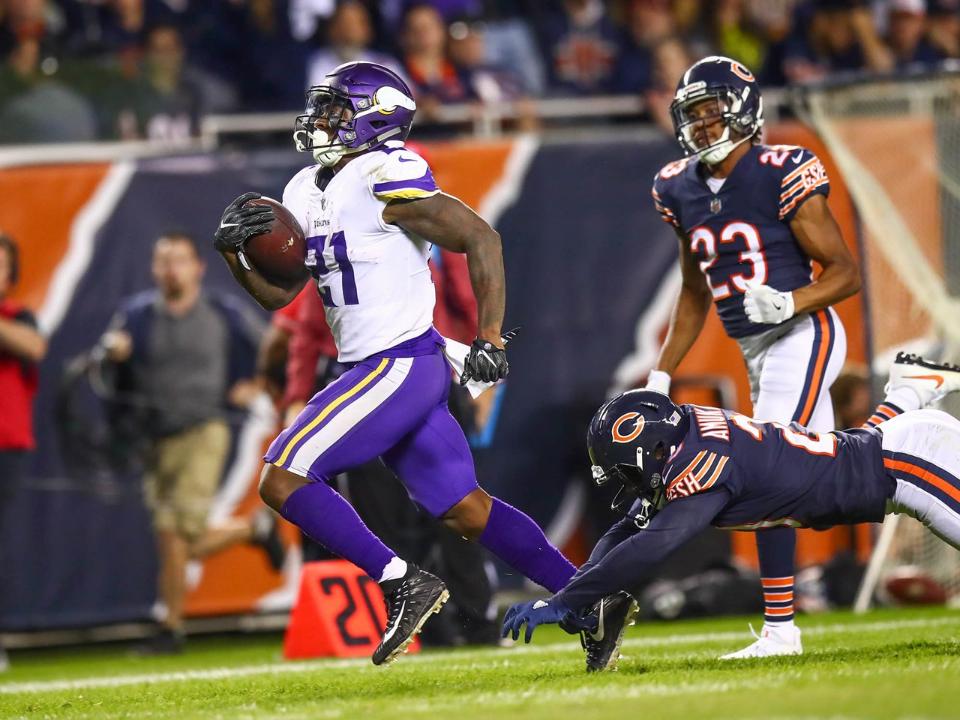 Back-to-back five-touchdown games will tend to raise one’s stock, especially when it’s a rookie. Deshaun Watson has been phenomenal through four starts, and simply as a passer, he’s on pace for a record-breaking season. The 16-game pace for Watson is 3,880 passing yards, 44 touchdowns, and 12 interceptions. Taking the rushing numbers into account, he’s a solid QB1 for the rest of the season.

Watson had as many touchdown passes in Week 5 as Ben Roethlisberger had interceptions. The two-time Super Bowl champion hasn’t looked good at all this season, and he needs to stay out of lineups until the Pittsburgh offense regains the explosiveness we are used to from recent years.

While Latavius Murray was the top waiver-wire pickup of the week, Jerick McKinnon did the best job replacing Dalvin Cook on Monday night. McKinnon out-touched and out-gained the starter, and Case Keenum playing quarterback will probably force the offense to rely on him more in the short-passing game. McKinnon needs to be picked up in all leagues.

Ty Montgomery was dominating work out of the Green Bay backfield until his injury last Thursday night, and it led to more work Aaron Jones. Unfortunately for Montgomery owners, Jones has looked great in his absence, and he has undoubtedly earned some work even with #88 returns.

Peterson was bordering on being droppable through five weeks, but a Tuesday morning trade to the Cardinals has suddenly given his fantasy prospects new life. The 32-year-old will be the unquestioned starter for Arizona, and he’s ran behind poor offensive lines in the past.

Crowell did nothing to keep him from being a repeat as a “faller.” The Browns would be better off giving Duke Johnson and Matthew Dayes most of the backfield work; Crowell is averaging 3.1 yards per carry.

Another repeat from last week, John Brown has gone two-straight weeks without having a setback to his various injury issues, and he was able to find the end zone against the Eagles. Having only two catches doesn’t inspire much confidence for fantasy owners, but anyone who watched the game saw that he had a handful of deep opportunities come his way.

He had his best game of the season against the Bucs in Week 3 when Case Keenum was at quarterback, but that included a couple of somewhat lucky plays due to really poor tackling. Plus, you have to predict for the future what a guy will do, not what he’s already done, and Sam Bradford being out for an indefinite period of time is definitely going to hurt Diggs.

Which Eagles wide receiver has the most fantasy points through five weeks? Not Alshon Jeffery; it’s Nelson Agholor. The former first-round pick was great in Sunday’s win over the Cardinals, and his confidence is at an all-time high. When the matchup is right, Agholor is worth a spot in your lineup.

Watkins seemed content with a limited role when the Rams had the NFL’s highest-scoring offense, but after last week’s loss where he didn’t catch a pass, he took to social media and voiced his displeasure. A matchup with the Jaguars in Week 6 probably won’t fix things.

He’s only averaging 7.1 yards per catch, but ASJ is someone that should be picked up in PPR leagues for those struggling at the tight end position. Seferian-Jenkins has 15 catches through three games, and the Jets will keep him involved every week with limited weapons on the perimeter.

Hunter Henry has performed when he’s been a part of the game plan, so Los Angeles should start to feature him more at Gates’ expense. The future Hall-of-Famer has the touchdown record out of the way, and the Chargers would be focused on winning now and in the future by playing Henry more.