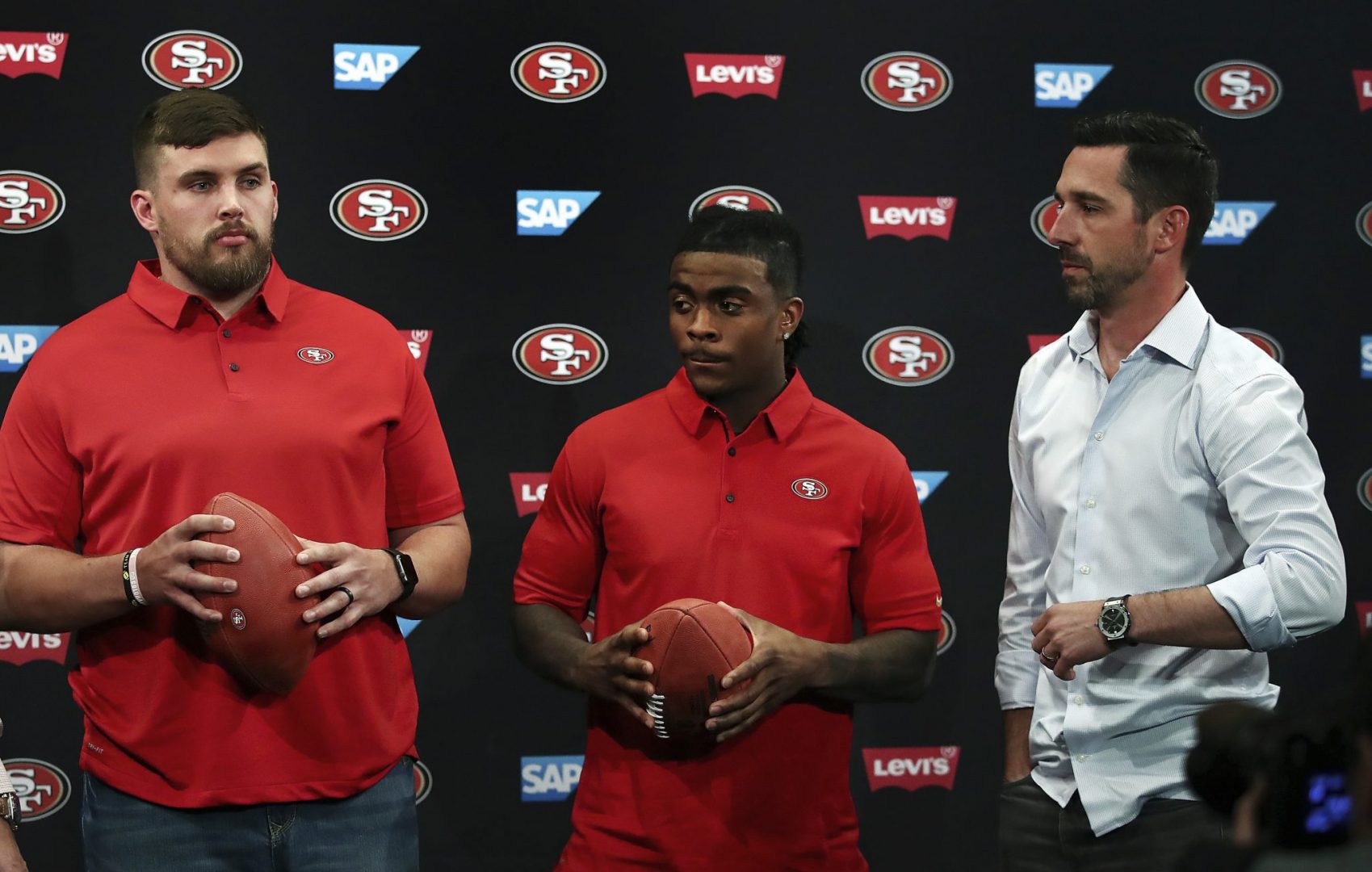 Fantasy Impact Of The First Week Of 2018 NFL Free Agency


There are still some veteran skill players like DeMarco Murray, LeGarrette Blount, Frank Gore, Adrian Peterson, Michael Crabtree, and Jeremy Maclin left to sign, but a lot happened in free agency over the last few days. The real-life ramifications are more important, but getting into the fantasy impact of some of the biggest moves might be more straightforward because we aren’t exactly sure how the new coaching staffs will deploy their new talent. We’ll use both performance history and potential role to project fantasy impact for 2018.

[Editor’s Note: You can get all the fantasy football news and analysis, updated by-the-minute, here and on individual player pages.]

People might not realize this, but Kirk Cousins has actually been a top-six fantasy quarterback in each of the last two seasons. Jay Gruden is a good offensive coach, but the Redskins didn’t have a strong supporting cast last season, and Cousins still put up solid numbers. Now that he’s with a Vikings team that has Stefon Diggs, Adam Thielen, Dalvin Cook, and Kyle Rudolph, Cousins should be a lock for a top-five fantasy season, even if he doesn’t quite offer the upside of an Aaron Rodgers.

The Vikings probably would have been the best situation for Case Keenum, but he probably ended up in the second-best spot for him in Denver. More needs to be added to the offense, but he has a similar situation as last season with basically two numbers one receivers in Demaryius Thomas and Emmanuel Sanders. Keenum gives his guys a chance to make plays, and having DT and Sanders on the outside should give him confidence in doing so. Keenum’s arrival should be great for both Thomas and Sanders.

Meanwhile, Sam Bradford’s arrival in Arizona should be great for Larry Fitzgerald and David Johnson. This signing isn’t official yet, but it should be announced sometime today after Bradford apparently passed his physical last night. The Cardinals need to add more weapons on the outside for Bradford, but Fitz and Johnson are a good start. Historically, the Cardinals have had success with quarterbacks after they’ve been with a couple of other teams (Kurt Warner, Carson Palmer), and Bradford might provide similar success. A QB1 season is a real possibility if he stays healthy for 16 games.

It’s possible the Jets draft a quarterback and start him right away, but Teddy Bridgewater is probably the favorite to be the Jets’ starter right now. Josh McCown played very well last season, but Bridgewater is getting paid more and still has the potential to be a long-term option at just 25 years old. The weapons for New York aren’t great, but they’re solid with Robby Anderson, Quincy Enunwa, and Jermaine Kearse. Also, offensive coordinator Jeremy Bates is highly regarded and could help Bridgewater have success. The former Vikings quarterback might be a good streaming option if not a backend QB1 this season.

The 0-16 record indicates otherwise, and the loss of future Hall of Fame left tackle Joe Thomas hurts, but the Browns are actually pretty strong up front on the offensive line. Things will change if Cleveland gets Saquon Barkley early in the draft, but for now, Hyde offers a ton of upside as a mid-round fantasy asset. Hue Jackson has frankly done a poor job as the Browns’ head coach and has gotten away from the run a bit, but he typically wants to run the football…a lot. Hyde could be a 20-touch-per-game back on a team that will hopefully be a lot better in 2018.

The signing with the biggest negative fantasy impact on another player is probably Dion Lewis signing with the Titans, as it takes away some of the upside Derrick Henry had after Tennesee released DeMarco Murray. Now, this could be an offense where Henry and Lewis mix in and out for much of the game. They can both be solid fantasy assets, but a committee-like backfield caps the upside of both players.

John Lynch, Kyle Shanahan, and the Niners targeted Jerick McKinnon in free agency, and they could have big plans for him after giving out a deal that pays him the fourth highest salary for a running back. Perhaps McKinnon could become Shanahan’s Devonta Freeman in San Francisco, which could obviously lead to a ton of production and fantasy points in 2018. We’ll have to see who else the Niners add to the backfield, but McKinnon looks like the clear top guy.

Jon Gruden gets a former Tampa Bay Buccaneer, which isn’t the least bit surprising. Everyone that’s paid attention to the NFL and/or fantasy football over the last few years knows Martin has been one of the biggest up-and-down players in the league. He’s had two 1,400-yard seasons, but he hasn’t topped 500 rushing yards in his other four seasons. Oakland has a strong offensive line, so if the Raiders part ways with Marshawn Lynch, Martin could be a lot closer to 1,400 yards than he is 500 yards in 2018.

Jonathan Stewart didn’t take long to find a new team after the Panthers released him, as he ends up with his former Panthers GM Dave Gettleman, who is currently GM of the Giants. If the signing of left tackle Nate Solder is any indication, the Giants are looking to really beef up the offensive line in front of Eli Manning. The team could look to pound the ball with Stewart, and he’ll be a high-floor fantasy option if he gets 15+ carries per game like he did for much of his career in Carolina.

At a whopping $16 million per year over three years, you can follow the money on this one. The Chiefs didn’t pay Watkins that much money just to run go routes and clear out the defense—they anticipate him being a big part of the offense. With Tyreek Hill on the other side and Travis Kelce and Kareem Hunt at tight end and running back, defense are going to be in a bind when trying to defend Kansas City’s offense. He might have some up-and-down weeks, but Watkins’ upside is undeniable.

The Bears presumably made Allen Robinson their top priority in free agency, and he gives Mitchell Trubisky a true number one target as he enters his second NFL season. New head coach Matt Nagy should open up this entire offense, and Robinson will be the clear focal point of the passing attack. Coming off a torn ACL, Robinson could deliver WR1 value at a great cost in fantasy drafts later this year.

Michael Crabtree had 25 touchdowns over the last three seasons with the Raiders, and Jordy Nelson has 33 of them over his last three full seasons (and until Aaron Rodgers got hurt last season, he led the league in touchdowns but only ended up with six on the year). Jon Gruden is going to utilize Nelson, and we know Derek Carr knows how to find his receivers for scores. Nelson offers obvious double-digit touchdown potential in 2018.

Washington’s receiving corps last season was very inconsistent, and the signing of Terrelle Pryor clearly didn’t work out. Paul Richardson has better skills as a wide receiver than the former quarterback Pryor, and he will have an immediate impact as someone that can stretch the field for Jay Gruden’s offense. It’s tough to gauge Richardson’s fantasy value right now, as it’ll come down to which receiver out of him, Josh Doctson, and Jamison Crowder becomes the top wide receiver option to go along with Jordan Reed at tight end.

Michael Crabtree could be on the way to Baltimore after the Raiders released him yesterday, but for now, John Brown could be the clear top target for Joe Flacco in 2018. After Brown’s 1,000-yard 2015 with Arizona, he hasn’t been able to stay on the field while dealing with many soft tissue injuries and unfortunate complications with his sickle cell trait. If he’s on the field, he could be at his best as a deep threat to compliment Flacco’s rocket arm. Flacco has had success with smaller receivers like Brown, and it seems like the two are a good match.

How many players get to say they’ve played with three Hall of Fame quarterbacks? That’s what Jimmy Graham is going to do, as he’s went from Drew Brees (HOF lock) to Russell Wilson (likely HOF) and now to Aaron Rodgers (HOF lock). Rodgers just lost one of his big touchdown-converters in Jordy Nelson, so Graham could pick up a lot of that slack in the red zone. As always, Graham is as good of a bet as any tight end aside from Gronk to put up double-digit scores, and his yardage could get back up to 800-1,000+ in Green Bay.

2017 second-round pick Adam Shaheen is still at tight end for the Bears, but Chicago is paying Trey Burton to come in and make a big impact for them. With weapons Allen Robinson and Taylor Gabriel added to the outside, the middle of the field should be open for Mitchell Trubisky to connect with Burton. The former Eagles tight end could match his career totals (63 catches, 629 yards, six touchdowns) in his first season with the Bears.