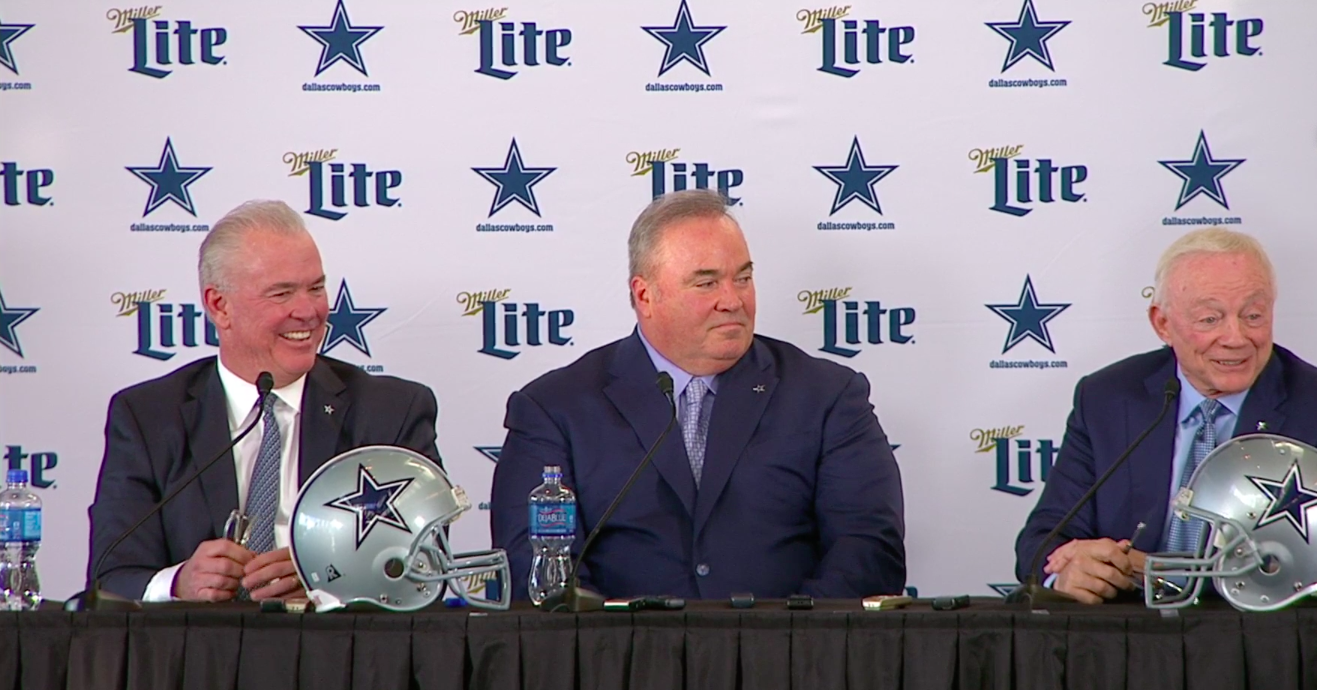 
What impact will Super Bowl-winning head coach Mike McCarthy have on the Cowboys from a fantasy perspective? If you missed the previous two articles, be sure to check them out:

I would be shocked if Dak Prescott wasn’t back in Dallas next season, so assuming he’s under center (whether it be on the franchise tag or a long-term deal), the former NFL Offensive Rookie of the Year should be set up for success under McCarthy. The new Cowboys head coach helped guide four seasons of 38+ touchdown passes with single-digit interceptions out of Aaron Rodgers in Green Bay, and the weapons for Dallas are comparable to the core of Jordy Nelson, Davante Adams, and Randall Cobb (or Nelson, Greg Jennings, and Donald Driver in prior years).

Plus, offensive coordinator Kellen Moore being retained will create added familiarity for Prescott, who has the intelligence and versatility to thrive in any system. It will be interesting to see how the ideas of the staff blend together, but talk of McCarthy being “bland” at the end of his Packers tenure is overblown. I expect Dak to lead a passing attack that will spread the ball around to Amari Cooper, Michael Gallup, and Randall Cobb; another top-five fantasy finish is certainly possible.

The only way the outlook for Ezekiel Elliott would have changed much based on the next head coach would have been if Dallas ended up trading for Mike Zimmer or hiring someone else that wants to run, run, and run some more. Still, while McCarthy definitely leans towards more of a pass-happy attack, he’s mostly preferred to use a feature back when possible (Aaron Jones wasn’t viewed as a guy that he could count on in all situations two years ago). Most notably, Ryan Grant handled 300+ touches in back-to-back seasons early in his career before injuries set in, and Eddie Lacy totaled 1,435 yards and 11 touchdowns on 319 touches as a rookie in 2013.

Of course, Zeke is on a different level as a complete football player behind a dominant offensive line, and he should be a lock for the fourth 350-touch campaign in five years. We won’t know until next fall, but I would assume Tony Pollard will again be little more than a premium handcuff, as the Cowboys are going to feed Elliott on a team they expect to compete for a Super Bowl.

Playing with a future Hall of Fame quarterback and their own individual talent obviously had a lot to do with it, but Jordy Nelson (three), Greg Jennings (two), Davante Adams (two), and Randall Cobb (one) all had double-digit touchdown seasons in McCarthy’s offense, and Amari Cooper should view the team’s new head coach as another reason to re-sign on a long-term deal this offseason. Despite battling injuries and having multiple duds throughout the year, Cooper finished with a 79/1,189/8 line in 2019, including a career-high 15.1 yards per reception. If he is back, Cooper should remain a WR1 option with high-end upside considering his chemistry with Prescott.

Michael Gallup should also be happy about the Cowboys hiring McCarthy, and he would skyrocket to WR1 territory if Cooper ends up signing elsewhere. In the “Robin” role, the former third-round pick should be able to build on his 1,107-yard, six-touchdown season with, hopefully, more trips to the end zone. Gallup plays slightly bigger than his six-foot-one frame and could reach new heights in an offense that wants to feature perimeter receivers.

Turning 30 in August, Randall Cobb is now six years removed from his breakout  season of 91 receptions, 1,287 yards, and 12 touchdowns under McCarthy, but he showed he still has plenty left in the tank with 828 yards and a career-high 15.1 yards per reception last year. If the Cowboys want to bring him back, I think there will be enough targets to go around for Cobb to draw weekly FLEX consideration, but what the team does at tight end will be telling.

It didn’t quite feel like a 100% certainty that Jason Witten was going to retire for good following a 2019 season that fell short of expectations, but I would be surprised if he returned to the team as their No. 1 option at tight end. Overall, the franchise has a chance to completely reset the position to grow with the rest of their offensive core, though the other weapons McCarthy, Moore, and Prescott have to work with makes it unlikely that a newcomer—whether free agent or draft pick—would be able to be a big-time statistical contributor in 2020.