WOLF SPORTS ALERT There may be temporary bugs due to site performance upgrades. Thank you for your patience!
Home / frontfantasy / Fantasy Implications Of The 2020 NFL Coaching Hires: Washington Redskins 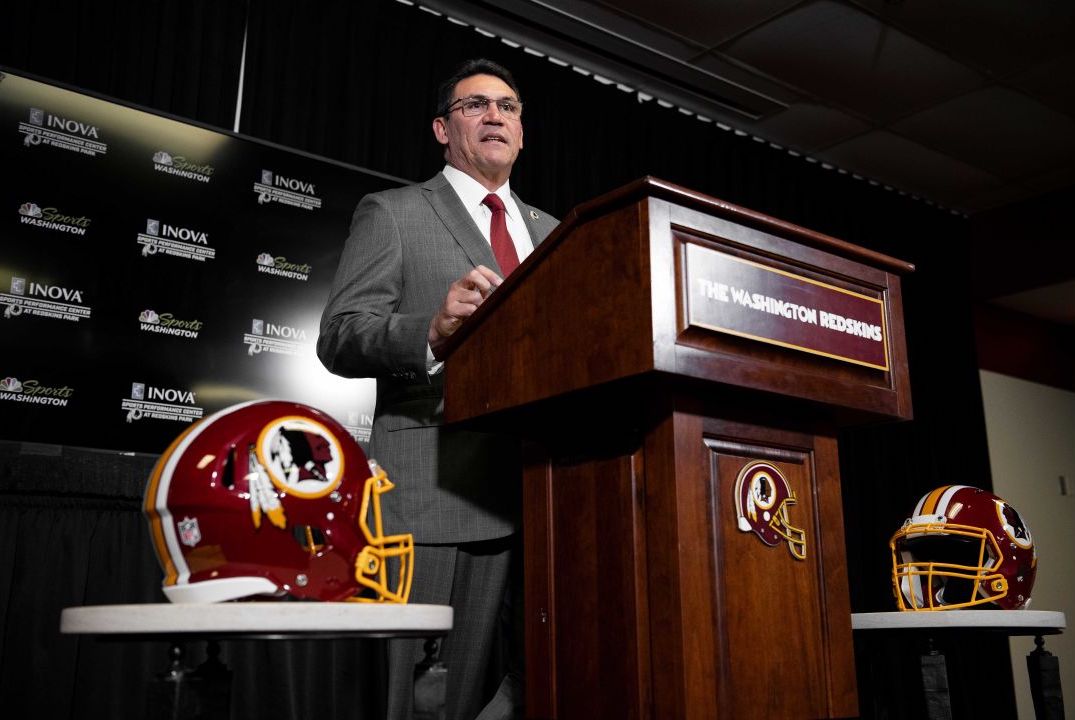 
The fifth and final fantasy breakdown based on this year’s coaching cycle discusses the changes in Washington under Ron Rivera and his new staff.

Fantasy implications for the Cowboys

Fantasy implications for the Giants

The Cardinals trading Josh Rosen a year after using a top-ten pick on him creates at least some mystery for the Redskins and Dwayne Haskins over the next several weeks because they own the No. 2 overall pick in a strong draft class, but new offensive coordinator Scott Turner said he was “a really big fan” of Haskins entering the league, and Rivera not declaring him the starter already could be a motivational tactic more than anything else. Turner’s offense will be designed to quickly get the ball out of Haskins’ hands and to the playmakers, which—despite a big frame and strong arm—is basically what he did at Ohio State.

The only other quarterback under contract right now is Alex Smith, and his potential return (although it seems unlikely for the start of 2020) may have been a reason for Rivera to not commit to Haskins as his starter. If the veteran can get on the field sooner than expected, perhaps Washington would see an opening to compete in the NFC East. Sticking with the outlook for Haskins, he is unlikely to draw serious consideration as a QB1 option in redraft leagues over the summer, but the dynasty arrow is pointing up with stability at head coach.

Appearing in just five games in two years since entering the league could have Derrius Guice on somewhat thin ice as the potential starter for a coaching staff that has no ties to him, but we will fortunately know more following free agency and the 2020 NFL Draft. Whoever the lead back is will be in a good position under Turner, who basically runs the system his father Norv ran when coaching Emmitt Smith, LaDainian Tomlinson, Christian McCaffrey, and others over the years. Guice showing flashes as a pass-catcher should help his cause.

The wild card for the entire offense is Bryce Love, and if we assume full health for everyone, he has star potential for the Redskins. The all-around skillset for the five-foot-nine runner makes him an excellent fit for Turner’s system; plus, he doesn’t even need a featured workload to become a significant fantasy contributor. Injury history makes him a risky investment, but I’d be targeting him in dynasty leagues.

Perhaps the biggest beneficiary of any coaching change out of all five teams is Terry McLaurin, who will essentially play the D.J. Moore role in Turner’s system as a focal-point of the passing attack. Last season, that led to an 87/1,175/4 line for Moore despite a revolving door at quarterback, and I would argue that McLaurin having more downfield ability allows for even greater upside, especially paired with the strong right arm of his college quarterback.

Behind McLaurin, there is a decent chance the Redskins have a new No. 2 and No. 3 receiver because of the depth in this year’s draft class, but Kelvin Harmon showed enough flashes to fight for a bigger role heading into his second season. The NC State product has the size, toughness, and ball skills to win on the perimeter, and the touchdown potential would make him a quality late-round target assuming Turner views him as the team’s top threat in the red zone.

Trey Quinn never got going last season (he averaged just 4.2 yards per target), and he may be on the roster bubble in training camp, especially after Steven Sims emerged down the stretch with four touchdowns over the final three games. While it’s a very small sample size (four games), the undrafted rookie was on pace for an 80/920/16 line when he played more than 60% of Washington’s offensive snaps. I think Turner will find a way to get the ball in his hands similar to Curtis Samuel in Carolina.

The Redskins and fantasy owners unfortunately can’t count on former Pro Bowl tight end Jordan Reed to be on the field after missing the entire 2018 season, and even if he does return, the effectiveness will be a question mark entering his age-30 campaign. Washington could certainly use a player of his caliber as another weapon for Haskins, but again, we could see a completely different offense in terms of both scheme and personnel following the draft. I would say Jeremy Sprinkle has a better chance of having fantasy value this year, though he wouldn’t be a priority in Turner’s offense.