WOLF SPORTS ALERT There may be temporary bugs due to site performance upgrades. Thank you for your patience!
Home / frontfantasy / Fantasy Stock Report: Preseason Week 1, 2018 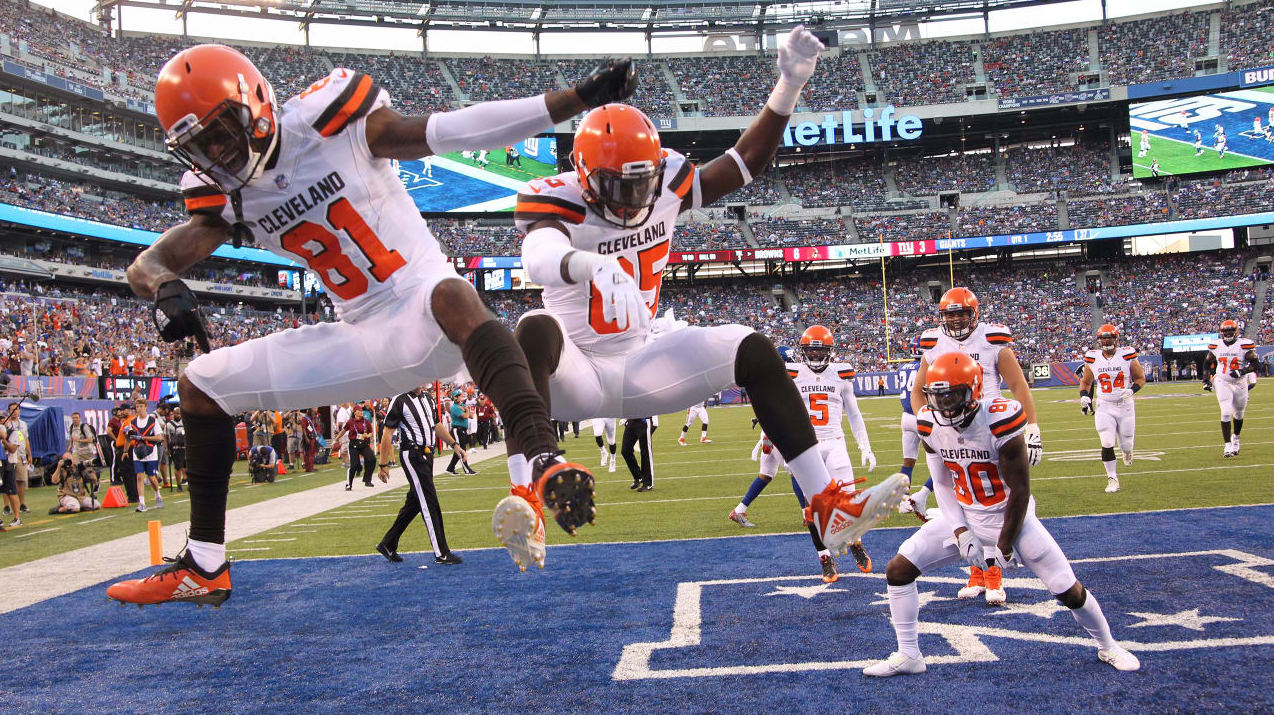 
There are several players that either saw their stock increase or decrease from a fantasy perspective based on the limited action we saw last week, so it’s time for our first stock report of the 2018 season. This article will release every Tuesday throughout the year.

Officially, Marshawn Lynch didn’t receive a carry in Oakland’s preseason opener, but unofficially (the play was called back for holding), he ran for a 60-yard touchdown and looked great doing it. Left tackle Kolton Miller opening a gigantic hole with the penalty obviously helped, but Lynch looked fast as he got to the second level and sprinted down the sideline, which is a tremendous sign for his 2018 outlook. I was lower on him thinking he might not have anything left in the tank, but one play was enough for me to get on board with Marshawn as a mid-round pick in fantasy drafts.

Promising rookie running back Derrius Guice will unfortunately miss the entire season following an ACL tear last week, but Washington is going with a next-man-up mentality, and Samaje Perine could be first in line for work. He only averaged 3.4 yards per carry in 2017, but the Oklahoma product was better with more touches, as he averaged 94.7 yards per game—and 4.2 YPC—when he received 20+ carries. Perine should be drafted in all leagues if he can hold off Rob Kelley over the rest of the month.

It should be a short-term issue, but Jordan Wilkins is also benefitting from an injury with Marlon Mack (hamstring) pulling up in Indy’s first preseason game. He didn’t play until the fourth quarter, but the Colts seem to be making Wilkins and fellow rookie Nyheim Hines earn their roles for the regular season. The former could see a lot of early-down work in camp with Mack out, and I think he has the size (six-foot-one) and overall smoothness to turn into a fantasy contributor.

A very public and somewhat one-sided spat with Cam Newton drew the headlines last week, but Kelvin Benjamin’s play was very impressive against his former team. In one drive, KB dominated with four receptions for 59 yards and a touchdown while looking like the difference-maker Carolina thought they were getting when they took him in the first round of the 2014 NFL Draft. Of course, we shouldn’t overreact to an exhibition, but there’s no denying that Benjamin looked good and will probably climb up draft boards.

With Josh Gordon still away from the team, Jarvis Landry is continuing to operate as the clear No. 1 target in the passing game; and more importantly, he is building chemistry with Tyrod Taylor and Baker Mayfield through both game action and practice reps. He isn’t Antonio Brown, but offensive coordinator Todd Haley might use Landry in a similar way, which could lead to more downfield chances and some big-time numbers in 2018.

Again, preseason performances shouldn’t be overvalued, but it’s certainly better to catch a couple touchdowns in a game than it is to not catch a couple touchdowns in a game. David Njoku was on the receiving end of a 36-yard score from Tyrod Taylor down the seam, and then he caught a jump ball touchdown from ten yards away with Baker Mayfield under center. The 2017 first-round pick has all the makings of a breakout, and Njoku’s confidence should only increase after a good start.

A less-than-spectacular showing against the Texans has people worried about Patrick Mahomes after he apparently struggled to start camp, and while the upside is there, I don’t think he will immediately step in and put up top-five QB1 numbers. Plus, with Andrew Luck getting healthy and others getting rave reviews, the market at the position could make Mahomes too risky, especially with three games on the road in the first four weeks of the year.

People that didn’t watch the game might think it’s a good thing that C.J. Anderson scored last week for Carolina, but it actually came in the fourth quarter, which suggests a) he isn’t a legitimate threat to Christian McCaffrey, and b) he might need to earn his roster spot. I suspected that the veteran back wouldn’t seriously push McCaffrey—who dominated first-team reps against Buffalo—based on the fact that he was signed very late in free agency, so Anderson might just be a low-upside change-of-pace option and handcuff if last week was any indication.

I’m not concerned about Nick Chubb rushing for just 11 yards on 15 attempts in his preseason debut, especially considering the blocking was terrible and he picked up 24 yards after contact. However, I am concerned that Chubb is clearly behind Carlos Hyde in the pecking order after the former 49er was treated like a clear-cut starter with a short, one-touch night. The talent of Cleveland’s second-rounder makes him an intriguing option in 2018, but fantasy owners should keep expectations in check with Hyde healthy.

It could just be a case of the rookie needing to earn it, but the Buccaneers started Peyton Barber (four carries for 21 yards and a touchdown) over Ronald Jones II (eight carries for nine yards and one touchdown) in the preseason opener, and there’s been nothing to suggest that things will change in the backfield. I wouldn’t be surprised to see Barber start the entire season with Jones being a heavily-used change-of-pace option similar to Jamaal Charles early in his career. That might actually be a role that better suits Jones, but we still need to see him take advantage of work with the starters.