WOLF SPORTS ALERT There may be temporary bugs due to site performance upgrades. Thank you for your patience!
Home / frontfantasy / Fantasy Stock Report: Preseason Week 2, 2017 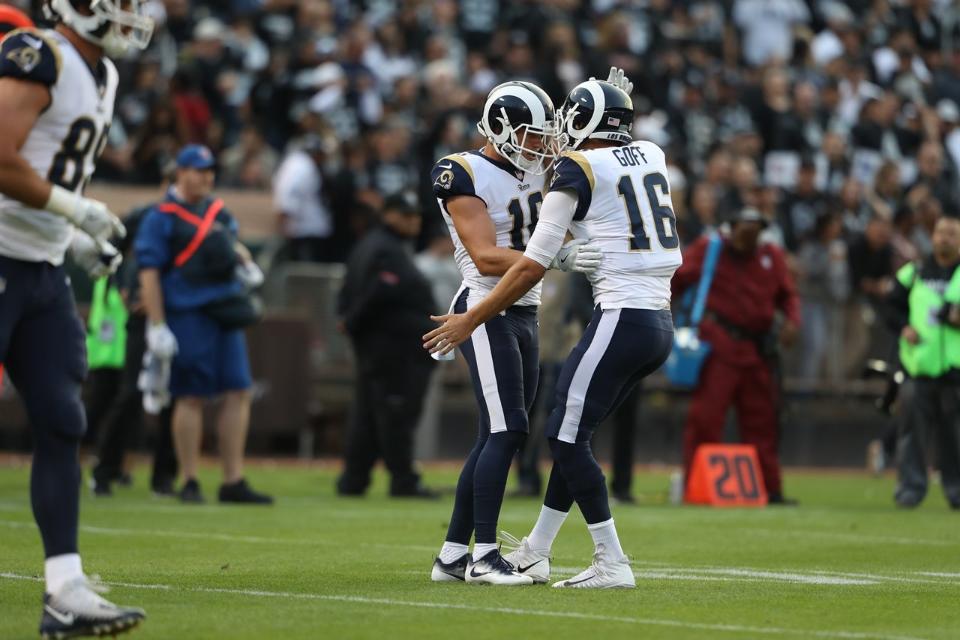 
Another week of the preseason is now done, and teams will have their regular season “dress rehearsals” in the coming days, so expect to see starters play into the second half for all 32 teams this week. Here is this the “Stock Report” heading into those games based on Week 2 of the preseason.

The first-overall pick in the 2016 NFL Draft lit up Oakland’s starters on Saturday night, including a beautiful touchdown throw with Khalil Mack bearing down on him. Jared Goff’s arm talent paired with Sean McVay’s offense is a great combination, and he has sneaky streamer potential early on with games against the Colts, Redskins, 49ers, and Cowboys in the first four weeks of the regular season. Dynasty owners should buy Goff if they can.

Eli’s first action of 2017 was less than promising, as the New York offense in general couldn’t move the ball against Cleveland in a primetime contest to conclude the week. Playing almost the entire first half last night, Manning was 10/14 for just 80 yards and the Giants had no semblance of a running game to support him. Even with Odell Beckham Jr. and Brandon Marshall on the outside—both of whom got banged-up against the Browns—Eli will likely be a disappointing fantasy pick in 2017.

Burkhead was probably the big winner of Week 2 of the preseason, totaling 70 yards on 11 touches with the first-team offense. The 27-year-old caught a touchdown pass from Tom Brady and took full advantage of a start with Mike Gillislee still recovering from a hamstring injury. Bill Belichick wants his running backs to be more versatile, and it looks like Burkhead is the most versatile back on the roster right now. We’ll see how things look against the Lions on Friday night.

I was not as high on Miller as most were entering the month of August, and his stock is definitely falling after two weeks of the preseason. Houston’s starter rushed seven times for 18 yards against the Patriots on Saturday night after rushing twice for zero yards against Carolina in the preseason opener. Even more concerning, rookie third-round pick D’Onta Foreman has looked great so far, totaling 93 yards on 16 carries (5.8 yards per carry) through two games and catching a 63-yard slant that he almost took all the way against New England. It feels like a backfield committee is emerging.

While he didn’t start, Kareem Hunt quickly entered the game for Spencer Ware (who played just one total snap) in the Chiefs’ preseason win against Cincinnati. Head coach Andy Reid wanted to see his rookie get work with the first-team offense, and he didn’t disappoint, rushing eight times for 40 yards and catching three passes for 23 yards. The third preseason game will be telling, but Hunt’s ADP is justifiably rising.

Perkins had a 16-yard rush last night against Cleveland, but besides that, he has rushed for negative-three yards on his other ten carries this month. I previously called Wayne Gallman a deep sleeper, and his time may be coming, as he rushed for 22 yards on five carries last night and caught two passes for 20 yards. If you don’t want to take my word for it, Jon Gruden spoke glowingly of the rookie on the broadcast, calling him one of his favorite picks in the draft and he also openly wondered why he wasn’t playing earlier on an offense that needs a spark. I would be shocked if Perkins is able to hold off Gallman and live up to his mid-round value in fantasy drafts.

We now have a quarterback competition in Jacksonville with Blake Bortles struggling, and with all due respect to the third-overall pick of the 2014 NFL Draft, he doesn’t look like he can win it. Chad Henne isn’t suddenly going to be Kurt Warner, but he would be a marked improvement at the position right now. Even if the Jags do stick with Bortles, they have shown they want to relentlessly target Allen Robinson in 2017. He provides tremendous value at the top of the fifth round.

I was very excited about John Brown this year, but his health issues just haven’t gone away, forcing him to fall behind Jaron Brown for the #2 receiver spot in Arizona. Even if he is able to win back the job over the next couple weeks, the speedster has gone from high-upside mid-round pick to risky mid-to-late round pick.

In a talented draft class of wide receivers—including three top-ten picks—Cooper Kupp (a third-round pick) looks like the best bet for fantasy production as a rookie. Kupp shredded the Raiders on Saturday for 70 yards and a score on six catches, and like his quarterback, will have an easy early-season schedule. He’s worth a late-round pick, especially in PPR leagues.

If Jay Cutler’s first game action with the Dolphins was foreshadowing the regular season, it’s bad news for Landry. The slot receiver was held to one reception for negative-three yards while Cutler locked onto DeVante Parker last Thursday night. We know Cutler is comfortable with big-bodied receivers, and Landry could be run over by the Parker hype train, which isn’t quite like anything I’ve ever seen.