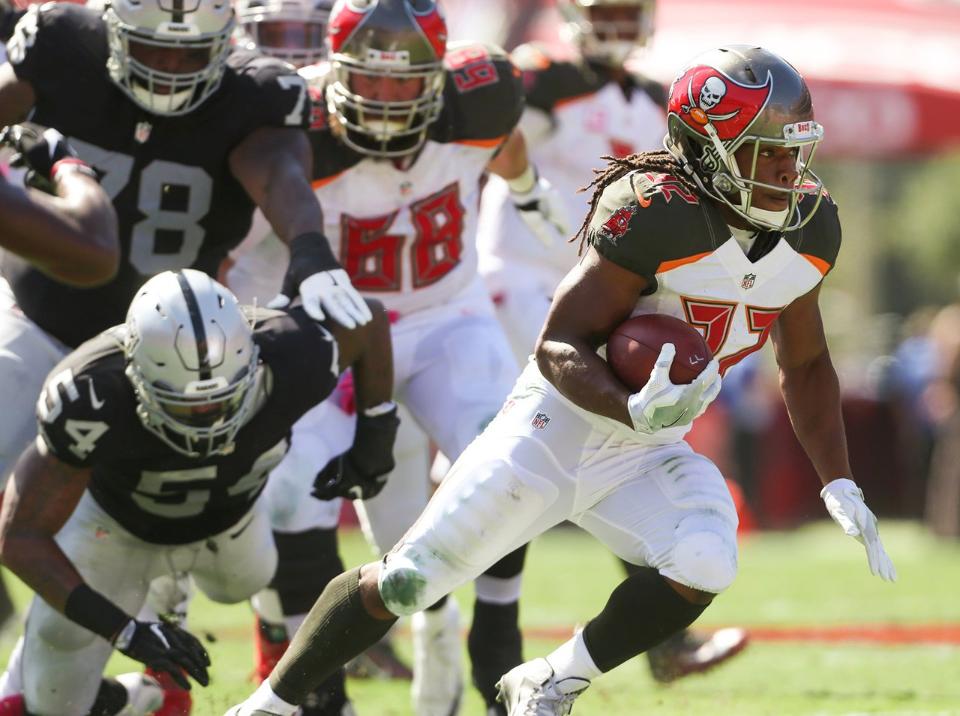 
Fantasy football time is here and championship seasons will soon begin. The key to fantasy football isn’t the first three rounds, but rather the later rounds when folks start snoozing. Last season, DeMarco Murray was, on average, drafted in the fourth round and that ended up in the top five RBs; while Josh Gordon was drafted in the single digit rounds by many, but never saw the field. Sleepers will determine your success, so let’s take a look a potential steals for this season.

The Seahawks quarterback struggled relative to his normal production last season, thanks to with injuries, lack of a run game, and an abysmal offensive line. However, Wilson should be back in form this season. Excluding last season’s outlier, Wilson has been a great fantasy option at quarterback every year he’s been in the league. Wilson is a dual threat that can amass rushing yards and touchdowns on the ground to go along with his passing ability. Receivers Doug Baldwin, Tyler Lockett, and Paul Richardson give the quarterback great targets to throw to on the outside, with tight end Jimmy Graham working the middle of the field. An easy schedule and an improved offensive line will definitely give Wilson more time to throw precise passes or space for scramble yards than he had last year. Wilson is going to be a steal in the 4th-6th rounds of your draft as someone with elite QB1 upside.

Jeremy Maclin is a terrific player that suffered from injury last season as well. Maclin was posting double digit games prior to his injury in a conservative passing team in the Chiefs. With the Pro Bowl receiver being the first option on the Ravens, he will look to fill a large role in the offense. Joe Flacco and the Ravens offense have struggled to come to life since their miraculous Super Bowl run, but the potential is there. Maclin is a reliable and easy target, similar to Anquan Boldin and Steve Smith Sr., who both flourished with Flacco. In terms of value, Maclin offers that, as he isn’t being drafted until around WR40. PPR leagues especially should take an extra look at Maclin, who is expected to get many looks in the offense.

Gurley suffered from a historically bad offense with the Rams, but he could return to his outstanding rookie level this season. The Rams made some significant moves to add help at receiver, and second-year quarterback Jared Goff has a season under his belt and should improve. This, along with the improvement on the offensive line, should help Gurley get back to his electric rookie form. The improved offense will give Gurley more space to run, while other threats on offense will reduce the defenders in the box. Though Gurley is going at the top of round three in many drafts, getting him in the fourth would be an absolute steal as someone that could lead all running backs in fantasy points.

The Bucs are in a precarious situation with their running backs. Doug Martin is looking to return into the starting line up and regain his top tier form when he returns from suspension; however, the Bucs have made it clear that his spot needs to be earned. Last season, Rodgers was excellent when given the reigns, performing as a top ten fantasy running back when he was the predominant starter last season. Rodgers is also a solid receiving running back, adding some more value in PPR leagues. Considering probable Bucs’ starter to open the season will slip to the later rounds in fantasy drafts, he’s a great pickup.

Crowder was terrific slot receiver and became a reliable target for quarterback Kirk Cousins in 2016. Now, with DeSean Jackson and Pierre Garcon gone, Crowder becomes Cousins’ favorite target at receiver. While Crowder will most likely stay in the slot position, it’s a good position for him to get a lot of targets from Cousins. While new addition Terrelle Pryor and Josh Doctson will see targets as well, the 5’9” receiver truly flourished when his wide receiver counterparts were attracting defensive attention. Crowder is a solid WR3 on any fantasy team, especially in PPR leagues. Cousins will look to his third-year receiver to lead a prolific offense again as one of his most trusted targets. Crowder is an easy steal at his current ADP, which is in about the 9th round.