WOLF SPORTS ALERT There may be temporary bugs due to site performance upgrades. Thank you for your patience!
Home / frontfantasy / Making The Case For The No. 1 Pick In 2018 Fantasy Drafts: Ezekiel Elliott 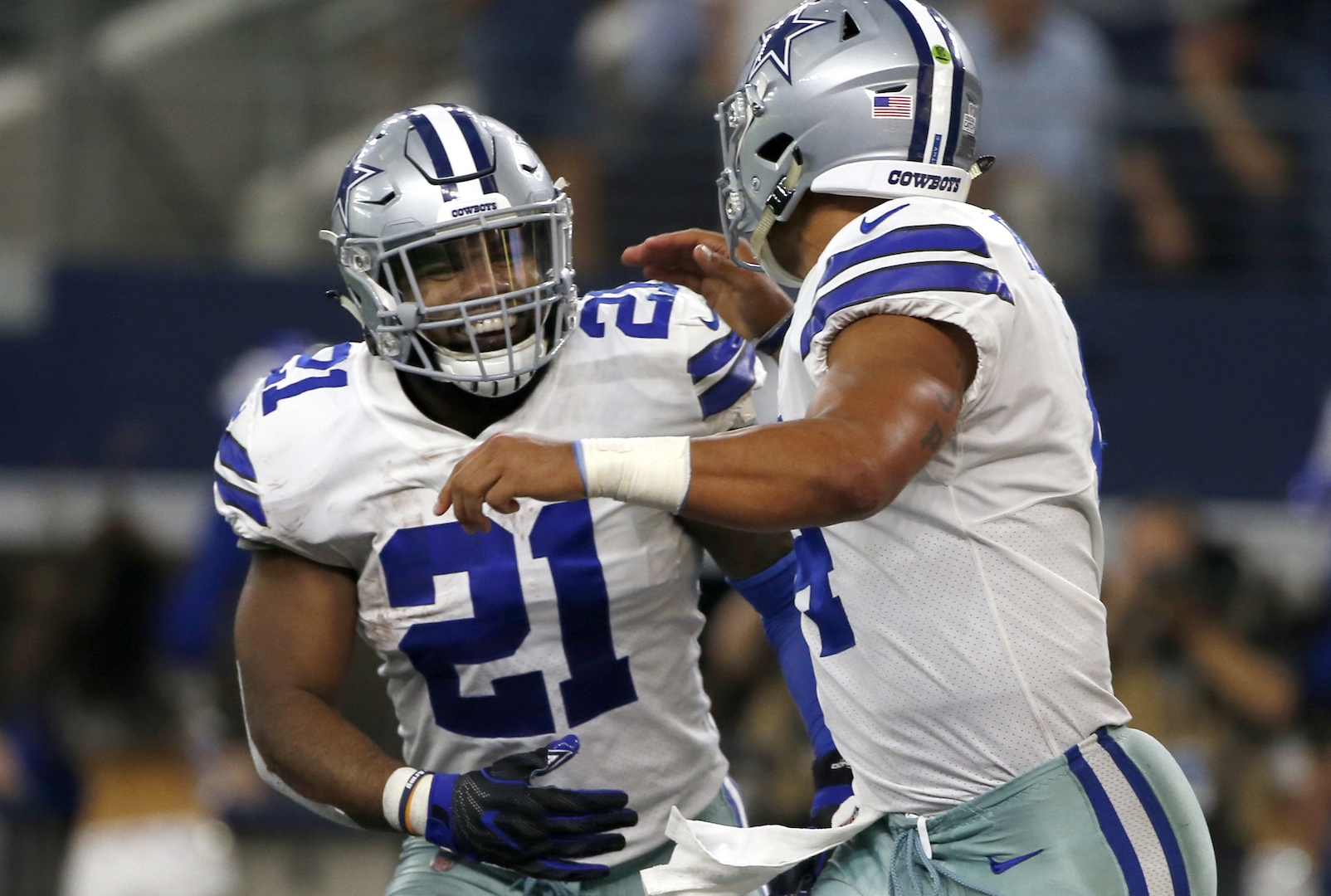 Making The Case For The No. 1 Pick In 2018 Fantasy Drafts: Ezekiel Elliott


If you missed the case for Todd Gurley or Le’Veon Bell as the No. 1 pick in fantasy drafts, you can check them out. Today, I continue with the case for Ezekiel Elliott, who is currently ranked third in FantasyPros expert consensus rankings for standard leagues. [Note: to get access to our premium draft rankings right now, get Fantasy Consigliere to finally “Be The Boss Of Your Fantasy League.”]

Of course, a big reason for the Cowboys’ success in the running game dating back to DeMarco Murray earlier this decade has been their dominant offensive line, and if health cooperates, they could be as good as ever this season. Across the front—LT Tyron Smith, LG Connor Williams, C Travis Frederick, RG Zack Martin, RT La’el Collins—Dallas is loaded, and they also have better depth and versatility with Cameron Fleming as a reserve and Williams/Collins both able to play inside or outside. If the group lives up to their potential by the end of the season, Elliott will probably have to come up with something really creative after gifting them ATVs for Christmas in 2016 and taking them on a luxury fishing trip this summer.

It was obviously by his own doing for off-field issues, but Zeke was suspended for six games last year in an on-again, off-again saga that I believe led to him being in worse shape than he was as a rookie. Now, he should be determined to return to form after a full offseason to let last year’s disappointment set in, and I expect to see a more explosive player with improved conditioning to make up for lost time. If that’s the case, he should break more big plays after he had just five rushes of 20+ yards and zero rushes of 40+ yards in 2017 (compared to 14 and three, respectively, two years ago).

Facing heavy fronts isn’t really new territory for Elliott, but the Cowboys no longer have Dez Bryant or Jason Witten in the lineup, which could cause defensive coordinators to sell out even more against the run. As we saw with Todd Gurley two years ago when he averaged just 3.2 yards per carry, it doesn’t matter how talented a player is if they have no where to run. That said, I am not concerned about the playmakers to the same degree that others are, as Dez and Witten were no longer downfield threats that forced the safeties to stay deep last year.

Injuries to the offensive line

Zack Martin is expected to be fine for Week 1 after avoiding a significant knee injury over the weekend, but Travis Frederick is reportedly dealing with stingers. It doesn’t seem like a big deal, but getting a second opinion isn’t usually a good sign, so a short- or long-term absence in the regular season shouldn’t be discounted. And unlike the other positions on the line, I’m not sure Dallas would be able to move guys around to get their best five on the field if Frederick needs to be replaced at center. Hopefully we get more clarity on the All-Pro’s health before the opener.

Involvement as a receiver

Elliott is better than average when it comes to his natural receiving skills, but he isn’t a guy that will get open with elite route-running ability, whether that’s out of the backfield, in the slot, or on the outside. Plus, while Zeke has been studying Marshall Faulk’s game to be better as a pass-catcher, I think Dallas likes keeping him in the backfield to pass protect because he’s so good at it. And unfortunately, you don’t get fantasy points for picking up a blitz, so even a slight uptick in receiving production would leave Elliott clearly behind Bell and Gurley in the area.

With Zeke, fantasy owners know they’re getting a back that should be considered the favorite to lead the league in rushing, but—right or wrong—he might be viewed as an unspectacular option at the top of drafts because he isn’t quite as versatile as some of the other candidates for the No. 1 pick.