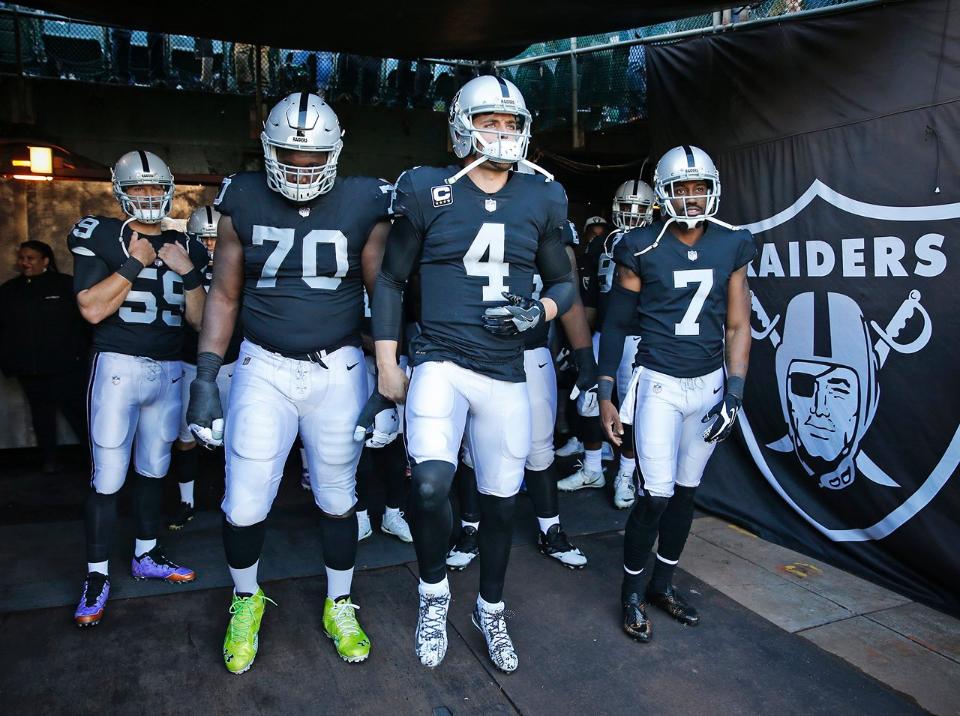 
The 2017 regular season is in the books, and it’s already time to look ahead to 2018 for fantasy owners. In the final stock report of the season, risers and fallers are based on last week’s action, potential coaching changes, and other recent happenings.

It sounds like Jon Gruden is heading back to Oakland after Jack Del Rio was fired on Sunday, and the Super Bowl-winning head coach lending his expertise to Derek Carr is the best thing that could possibly happen for the franchise quarterback. With Gruden in charge of the offense, Carr should instantly get back to the MVP form he had in 2016. Fantasy owners should target the 27-year-old (in March) as a bounce-back QB1 next summer.

There will be no coaching change in Denver this offseason, but the quarterback room will probably be remade. Paxton Lynch has started just four games since being drafted in the first round of the 2016 NFL Draft, and there appears to be a good chance that John Elway targets a quarterback after scouting Wyoming’s Josh Allen and USC’s Sam Darnold at their bowl games. Dynasty owners hoping Lynch earns the starting job and unlocks his potential next season could be disappointed.

Ajayi still has some football to play in January, but what he didn’t do in Week 17 could be a good sign for his fantasy stock in 2018, as the Eagles played all their offensive starters besides Ajayi. That seems to mean they deem him as their most important player with Carson Wentz out, and it would be surprising if he doesn’t handle the bulk of the work in the postseason and enter next summer as the clear-cut starter.

It might seem odd to see Gore here after rushing for 100 yards in the season opener and finishing with 261 carries for nearly 1,000 yards in his age-34 season, but Jim Irsay’s comments suggest Indianapolis will target a running back in the draft. The owner said yesterday, via Zak Keefer: “You put (Andrew) on that field, healed up, and you put an Edgerrin James—maybe that’s bigger, faster, and stronger—and let this man continue to do the job that he’s already begun to do, this is going to be a special place to be and a special place to play.” The new head coach will have a say, but it’s pretty clear that Irsay—who probably is repeating some of what he hears from GM Chris Ballard—wants a stud running back. That could leave Gore without a starting job next season.

Quietly one of the best touchdown-scorers in the NFL over the past two seasons, Latavius Murray finished his first regular season with Minnesota on a high note with 20 carries for 111 yards and two touchdowns last week. However, while Dalvin Cook is fully expected to be the team’s starter in 2018, Murray has certainly shown enough that another team could try to trade for him in the offseason (perhaps a reunion with the Raiders?). His play this month could go a long way in determining his value next year.

I remember the excitement about Lamar Miller in the fantasy community when he got away from the Dolphins like it was yesterday, but in two seasons under Bill O’Brien, Miller has rushed for just 3.88 yards per carry. Perhaps a potential change in scenery will do him good, but I don’t think the former Miami Hurricane star will ever turn into the RB1 everyone wanted him to.

JuJu thinks he deserves a 99 speed and 99 stiff arm in Madden after his kickoff return touchdown in the regular season finale, but I’m not sure about that. Still, he definitely deserves a huge boost from his current 79 overall, and fantasy owners who snatched him in a dynasty league have a legitimate WR1/WR2 option for years to come. Smith-Schuster just turned 21-years-old at the end of November.

Bryant had a three-year stretch when he was basically unstoppable in the red zone for Dallas, but since then, the former first-round pick has had season lines of 31/401/3, 50/796/8, and this year’s 69/8383/6. He actually looked to have a little more explosion than he has all season in the season finale, but he caught just three passes for 24 yards against the Eagles, and it would be a mistake to draft Dez as anything more than a FLEX option in 2018.

Godwin was a steal for the Bucs in the third round of last April’s draft, and he closed out an impressive rookie season with seven receptions, 111 yards, and the game-winning touchdown against the Saints in a comeback victory. Mike Evans will continue to be the top option in the passing game, but it will be impossible for Tampa Bay to keep Godwin off the field next season. Owners in dynasty leagues should target him while they can.

Hunter Henry supporters were eventually rewarded for sticking with him this season, but Antonio Gates’ presence remained a point of frustration. Unfortunately for those who are hoping for a huge year in 2018 for Henry, it sounds like Gates isn’t going to retire. The future Hall-of-Famer and free-agent-to-be could chase a ring with the Patriots or someone else, but it would ultimately be a surprise if he isn’t back with the only team he’s known, which would obviously hurt Henry’s fantasy stock for another season.