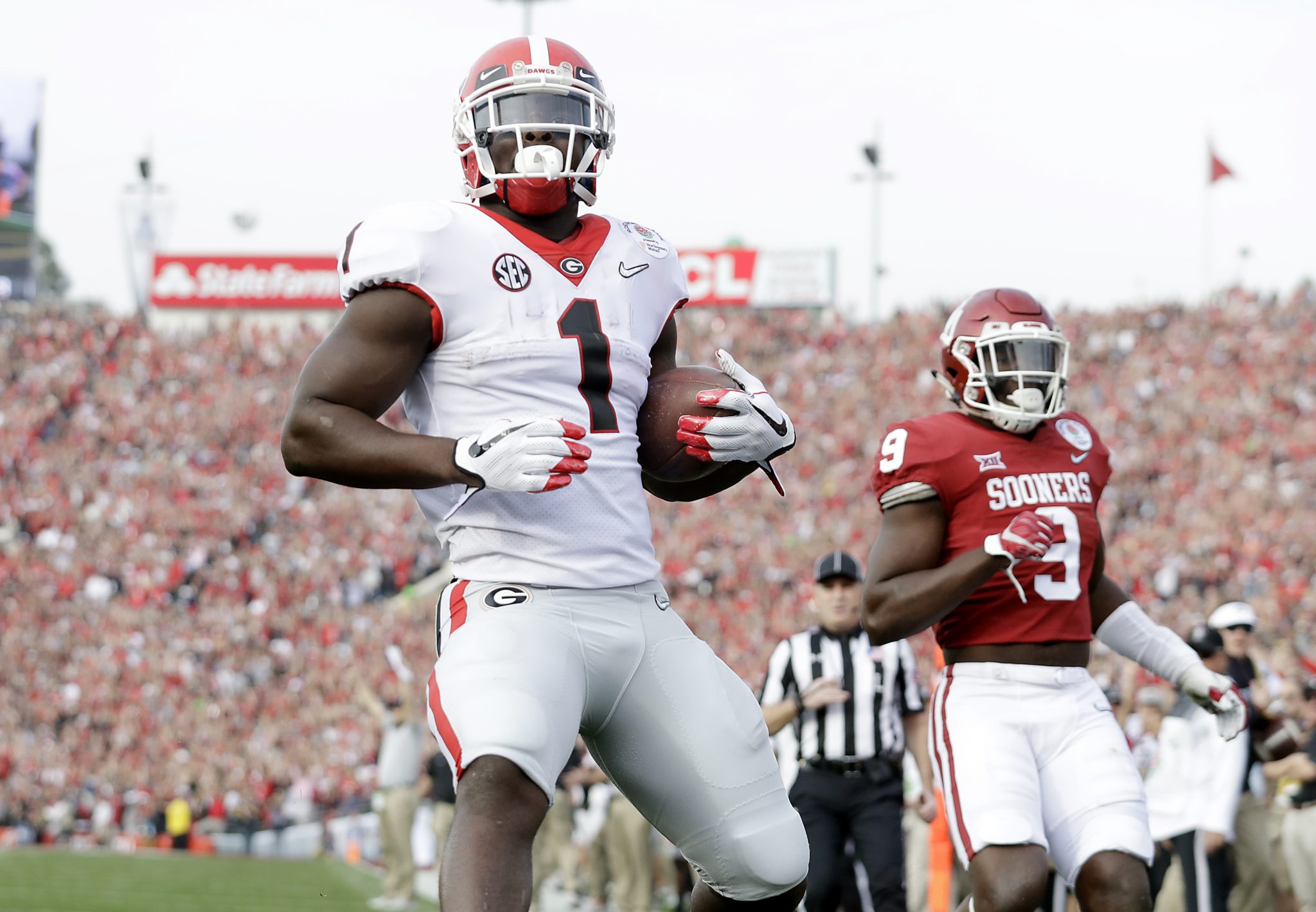 
A lot will change in the coming weeks, as NFL teams will build-upon, modify, and eventually finalize their draft boards for the 2018 NFL Draft. The situation a player lands in can have a huge impact on the success of the player, so these rankings will vary when the rookies are on their teams, but this is where the top 25 upcoming rookies stand fantasy football-wise ahead of the NFL Combine.

These rankings are especially important for those participating in dynasty leagues that happen to have a draft including rookies ahead of the actual NFL Draft, though the rankings are for the player’s impacts as rookies in 2018—not their long-term outlook as dynasty-league prospects.

Considered the best player in the draft, Saquon Barkley is a pro-ready running back that should be a 1,000-yard rusher if he stays healthy as a rookie. Some might be concerned if he lands in a situation on a bad team, but I’m not.

The upside for Lamar Jackson fantasy-wise is higher than anyone on this list. The former Heisman Trophy winner will need to land in a situation where he’ll have the opportunity to be the starter for this ranking to hold, and if he does, he could quickly become a fantasy star.

Because Sony Michel is so explosive, the team that drafts him should find a way to get him on the field. Alvin Kamara has been a comparison brought up for Michel lately, and while I don’t see them being the same player, Michel is a dynamic guy in his own right.

As a rookie, Le’Veon Bell totaled over 1,000 yards and eight touchdowns, and he’s the easy comparison for Auburn’s Kerryon Johnson. If he lands in a good situation like Bell did, he’ll offer similar 1,000-yard, eight-touchdown upside.

This running back draft class has a lot of options, but aside from Saquon Barkley, Derrius Guice might be the guy that’s the best bet to go in the first round. He might not offer the same upside as former LSU teammate Leonard Fournette, but Guice could put up some numbers as a rookie with his playing style.

Ronald Jones II made a ton of big plays for USC, and he’ll look to bring that big-play ability to the NFL. If he runs a sub-4.4 40 time, he could surge up draft boards to a late first-rounder and find himself in an ideal situation with a team picking in the 20s.

The most pro-ready receiver in the draft is probably Calvin Ridley, who looked poised to eventually become a first-round pick from the moment he stepped on campus in Tuscaloosa. Julio Jones and Amari Cooper both entered the league as solid fantasy options, and Ridley will look to do the same as a former ‘Bama receiver.

He might not be quite as polished as a route runner as Ridley, but Christian Kirk is an explosive playmaker that could have an immediate impact in the NFL based off his pure ability. He totaled 26 touchdowns playing three years in the SEC with Texas A&M, and touchdown ability is important in fantasy football.

He certainly has the ability to catch the football out of the backfield and pick up yardage, but Nick Chubb might not be used like Sony Michel and Ronald Jones II will be as rookies. However, if a team feeds him the ball, it wouldn’t be surprising to see Chubb lead rookies in rushing and be among the league’s leading rushers.

Nyheim Hines broke out as a runner for NC State as a junior last season, and he showed his ability as a receiver during his first two years in school, so the fast running back could at least be used out of the backfield as a weapon in the passing game as a rookie.

If you want college production, Anthony Miller has that after racking up lines of 95/1,434/14 and 96/1,462/18 in his final two seasons at Memphis. Teams might draft Miller with the intention of placing him right into the slot as a big-time contributor, so PPR leagues especially should track him.

On the flip side, James Washington is not just a big-play guy, but he sure did make a lot of plays down the field for OK State over the years. Also, Washington seemed to get better each year with the Cowboys, so he’ll look to continue his development as a rookie in the NFL.

As a big 6’4” receiver, Courtland Sutton will enter the NFL with great red-zone potential. Recently, some bigger receivers have taken time to adjust playing at the next level, but that doesn’t mean Sutton won’t come into the league and make plays.

There’s been some smoke out there about the Dolphins potentially being interested in drafting a quarterback, and Baker Mayfield seems like a fit. If Mayfield can put the ball on the money for Adam Gase’s offense like he did at Oklahoma for Lincoln Riley’s offense, the Heisman Trophy winner could put up some big numbers.

Sam Darnold won’t even turn 21 until June, and after he struggled with turnovers at USC, it might be difficult to trust him if he’s not in a situation with a strong supporting cast. If he does happen to land somewhere like an improved Arizona team, Darnold could be one of those guys that comes into the league and lights it up.

You aren’t going to get big rushing numbers from Josh Rosen, so the hope would be that he can sling the rock around as a rookie and put up passing numbers. He has the accuracy and arm strength to do just that, but right now Jackson, Mayfield, and Darnold look like better fantasy bets than him.

In terms of raw arm talent, there’s no contesting Josh Allen offers the most upside there. Also, he has the size and athleticism to run and pick up both yardage and rushing touchdowns, which is a big boost for fantasy football. However, he might not come in as a Day 1 starter, making him more of a bench stash.

Rookie tight ends haven’t had a ton of success in the NFL, but Mike Gesicki is 6’6” with really long arms, and he could be an immediate weapon in the red zone for quarterbacks. Touchdown-dependent leagues especially might want to consider Gesicki in 2018 if he lands in a good situation.

Hayden Hurst will be 25 at the start of his rookie season, so he might be more physically mature than the traditional rookie is. With a good combo of size and athleticism, Hurst could find himself in a situation that allows for a lot of early playing time in the NFL.

One of Baker Mayfield’s most trusted targets is in the draft, as Mark Andrews is a pass-catching tight end that should be a reliable target in the NFL. He might struggle to get on the field if he doesn’t block well, but perhaps Andrews could get quick playing time as a big body in the slot.

He’s being talked about behind the top-five quarterbacks in the draft, but Mason Rudolph could surprise some people and be taken by one of these QB-needy teams. If in a situation where he can sit back there and throw the ball, the experienced Rudolph could be at least a QB2 as a rookie.

If the Senior Bowl was any indication, Kalen Ballage will run hard at the next level. He might not be a Jordan Howard or a Kareem Hunt, but perhaps Ballage could push for 1,000 yards as a rookie if given a decent amount of work.

Marcell Ateman is a good athlete at 6’4”, so he might test really well at the Combine and shoot up draft boards. Ateman might not start out as a number one or number two receiver on a team, but he could be an immediate weapon on jump balls in the end zone.

“Crafty” is a word that could be used to describe Troy Fumagalli’s game, and that style could be very useful in the NFL. If Fumagalli just knows how to get open for his quarterback, he could immediately become an important target in his team’s offense.

Dante Pettis scored 15 receiving touchdowns as a junior at Washington, and though he wasn’t quite as productive as a senior, he could immediately contribute in the NFL as a third receiver. Also, Pettis returned an NCAA record nine punt returns for touchdowns in college, so he could add some scoring punch there