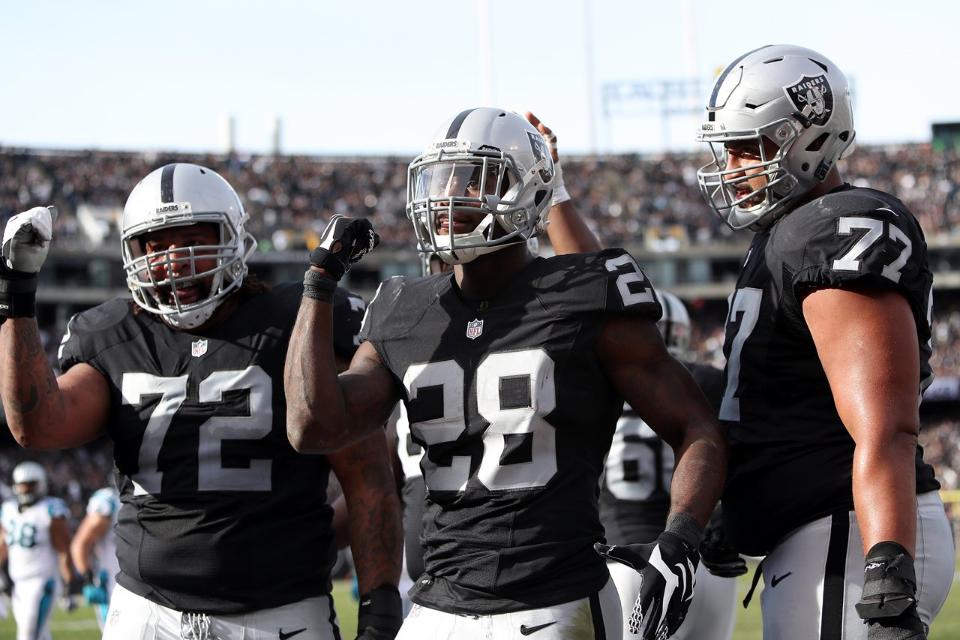 
The running back position is the most crucial to get right in fantasy football. A lot of things go into a successful season for an NFL back, including role, offensive line play, scheme, game flow, and most importantly: talent. The Vikings backfield was basically lacking in all those categories last season when Adrian Peterson was injured in Week 2, but things have changed since then. Peterson is gone, and the team signed Latavius Murray and drafted Dalvin Cook to attempt to replace one of the greatest running backs of all time. That is a tall task, but for a variety of reasons, Murray is my undervalued fantasy running back for the 2017 season.

It is no secret that Minnesota’s offensive line and running game was the worst in the NFL last season—and one of the worst in recent memory—as injuries piled up. The Vikings were last in the league in rushing with just 1,205 yards, and averaged a league-low 3.2 yards per carry. Jerick McKinnon is a skilled player and Matt Asiata has had some spurts of solid play in the past, but they simply had no chance to perform well with the blocking in front of them. Adrian Peterson averaged just 1.9 yards per carry on 37 attempts, which should tell you all you need to know about the line last year.

While the Vikings were struggling to get any semblance of a running game going to support Sam Bradford and an emerging passing attack, Latavius Murray was making plays for the Raiders. Murray finished as the 13th best fantasy running back last season, averaging 12.3 fantasy points per game, including the two games he didn’t play. Here is the full fantasy game log for Latavius in 2016 (standard scoring):

Oakland’s former starter was injured in Week 4 and then missed the next two weeks. If we take those three games out, Murray would have averaged 14.9 fantasy points per game, making him the eighth-best fantasy running back last season. Week 17 could easily be discounted, too, as the Raiders were playing without Derek Carr and gave Latavius just five carries in Denver (after rushing 20 times for 114 yards and three touchdowns earlier in the season against them) to possibly keep him fresh for the playoffs.

Murray had doubters all season that looked at his career-low 4.0 yards per carry behind an elite offensive line, calling him too touchdown-dependent, but they fail to recognize his injury. He wouldn’t have needed offseason surgery if his ankle wasn’t affecting him in 2016, so the fact that Murray still produced while injured flies right in the face of those people who think he needs to get “tougher” at six-foot-three, 230 pounds. It doesn’t get much tougher than playing through an injury, especially an ankle as a running back.

Murray totaled 2,917 yards and 20 touchdowns in three years with the Raiders, and caught 41 passes and 33 passes in 2015 and 2016, respectively. In those three seasons, he averaged 4.2 yards per carry, and only had the benefit of playing behind the super-elite offensive line with Kelechi Osemele for one season, and as stated, dealt with an ankle injury for most of the year.

Looking past all the numbers, Murray is one of the NFL’s better running backs in my opinion. He can convert at the goal line and in short-yardage situations, is scheme versatile, can split out as a wide receiver, and has breakaway speed with his sub-4.4 wheels. Also, the 27-year-old is a quality blocker, which will be key to seeing the field for the Vikings.

While Minnesota’s offensive line was bolstered with a couple of new bookends this offseason, they will still need a running back that will help protect Sam Bradford. Murray can stand up unsuspecting defensive ends or blitzing defenders with his size and strength, and it could lead to more playing time than people expect, as offensive coordinator Pat Shumer will probably want to play at a faster pace in his first full year in charge of the offense. Not having to worry whether the running back can make a block when checking to a pass play is a huge plus.

Second-round pick Dalvin Cook is getting the hype with Murray still recovering from his ankle surgery, but Latavius believes he “should be the guy” for the Vikings come September. He says the competition won’t keep him from helping out the rookie, but Murray is still confident he will be the starter for the Vikings.

How quickly he is able to get on the field in training camp will be a big factor in the backfield competition, but I think Murray will be a good fantasy pick whether or not he the “starter.” Dalvin Cook will not be able to simply out-run defenders like he did at Florida State, and he could face a little more of an adjustment to the league than fellow rookies Leonard Fournette, Christian McCaffrey, and Joe Mixon.

Jerick McKinnon will also see some playing time, but backfields with three contributors can and have worked. Look no further than last season and none other than Latavius Murray himself for an example. Oakland brought in rookies DeAndre Washington and Jalen Richard to compete with Murray in 2016, but even with them combining for 958 yards on 170 carries (5.6 yards per carry), a banged-up Murray earned playing time because of the all-around impact he had on the game.

If Latavius gets healthy and plays up to his potential, I could see Pat Shurmer and Mike Zimmer committing to him even more than Oakland did last season. In a worst-case scenario, Murray would be the lesser-half of a committee, but handle most of the short-yardage and goal-line work. A best-case scenario? The Vikings trust him more than Cook and he takes a large chunk of the between-the-20s work, too.

Also, keep in mind that Dalvin Cook has some injury concerns of his own. In a fast-paced offense with a pinpoint-accurate quarterback at the controls, there should be plenty of opportunities for both players to be productive. Currently owned in about 63% of ESPN.com leagues, Murray is being overlooked.

Murray’s role should be comparable to last season. The offensive line should be a decent unit, and will be helped by the scheme, which Latavius is a good fit in. Minnesota will be one of the best teams in the NFC in my opinion, so game flow looks to be in his favor. And if you still have concerns about the talent, don’t take my word for it—take the Vikings’.

The team gave Murray $8.55 million guaranteed this offseason, and they knew about his ankle injury. In a league that has devalued the running back position, it was a nice deal for Latavius. Even though Minnesota can get out of it after one year, the guaranteed money (including $3.4 million at signing) shows they won’t exactly push him to the side after drafting Dalvin Cook.

Furthermore, Mike Zimmer has often been hesitant to give rookies a lot of playing time. Cornerback Trae Waynes was the 11th overall pick in 2015, and he started just one game—in Week 14—as a rookie. Another cornerback, last year’s second-round pick Mackensie Alexander, saw little playing time for Zimmer’s defense, while first-round pick Laquon Treadwell caught just one pass in nine games as a rookie.

Could Cook break that mold? Absolutely. However, he had some fumbling issues at Florida State, and it is unlikely Zimmer features him, particularly early in the season. That opens the door for Latavius Murray to make his mark, and I think he will take advantage of the opportunity.