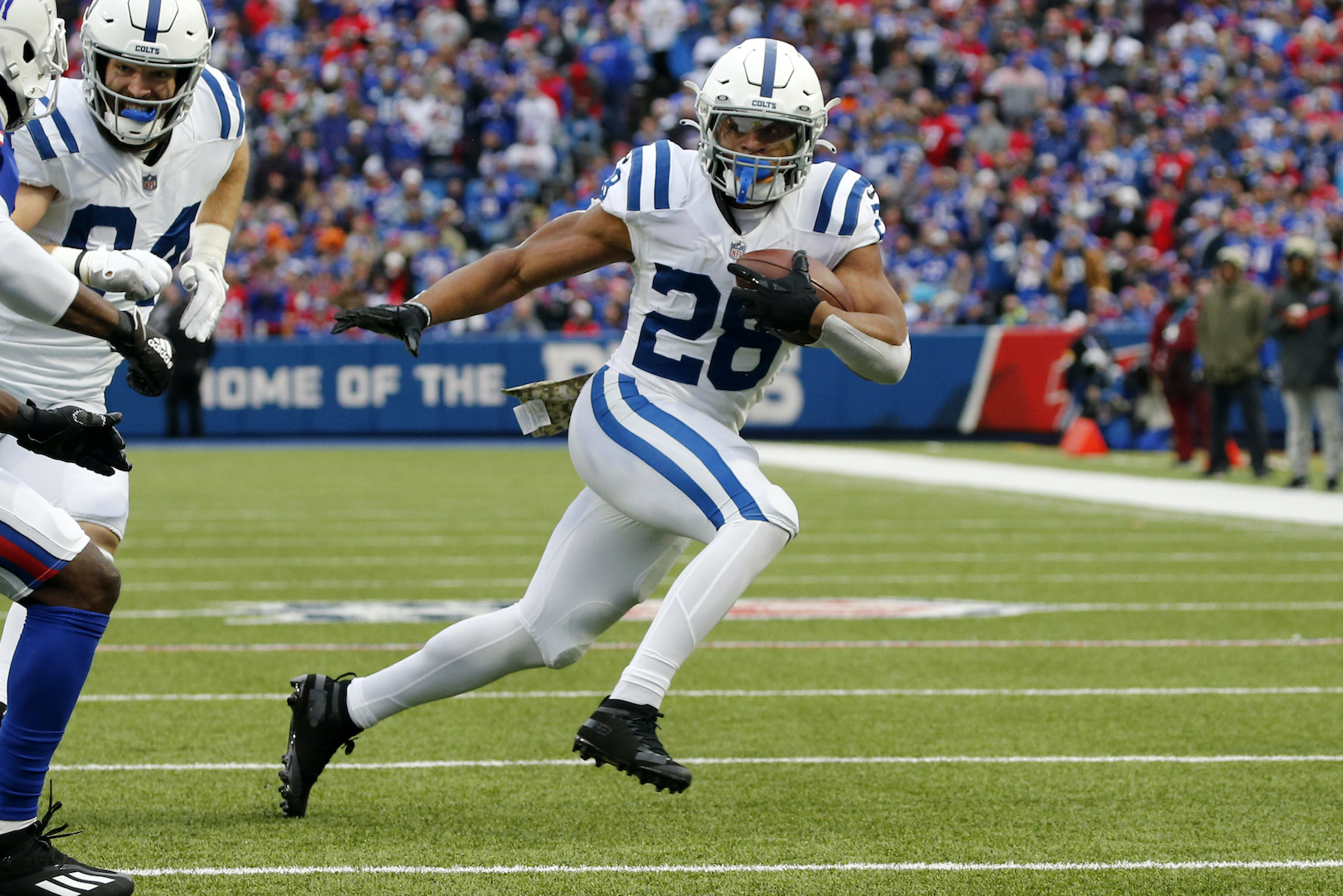 Herbert was in a predictable blowup spot against a depleted Pittsburgh defense, and he didn’t disappoint by finishing as the overall QB1. In addition to his 382 yards and three scores (plus an interception) through the air, Herbert also rushed nine times for 90 yards.

Taylor finally saw a breakthrough in usage last week with 27 touches (most of which came in the first half), but the Colts featured him all game against Buffalo—turning 35 touches into 204 total yards and five total touchdowns. Facing the NFL’s top-ranked defense made it by far the most impressive fantasy performance of 2021.

RB: Austin Ekeler, LAC
If not for Taylor putting up 50+ fantasy points, Ekeler would perhaps be getting more hype right now, but his four-touchdown night still single-handedly won weeks, and that likely includes some people that thought they were finished from facing Taylor earlier in the day. Ekeler rushed 11 times for 50 yards and two touchdowns with a 6/65/2 line through the air.

Adams was on the other side of the Packers-Vikings shootout, and he again stung Mike Zimmer’s defense with seven receptions, 115 yards, and two touchdowns of his own. Dating back to last season, Adams has seven touchdowns over his past three games versus Minnesota.

Ertz had mostly been quiet since his Arizona debut, but he went off with Colt McCoy under center on Sunday—catching eight-of-nine targets for 88 yards and two touchdowns. He’ll continue to see plenty of single coverage in Arizona’s spread-the-wealth offense.

Another quarterback change for the Jets combined with a difficult matchup against Miami wasn’t enough to end Moore’s hot streak—as he caught eight passes for 141 yards and a touchdown. The score was a 62-yard catch-and-run that tied up the game at 14-14 late in the third quarter before the Dolphins eventually pulled away.

The Patriots were already in good position to make Team of the Week based on their dominance when Matt Ryan was under center, but they capped off last Thursday night with a pick-six on Josh Rosen and then another interception versus Feleipe Franks to finish with 26.0 fantasy points.

Cincinnati’s offense stalling quite a few drives in Las Vegas territory allowed McPherson to take advantage—as he hit four-of-four field goals, including bombs from 54, 53, and 51 yards.

Surprise of the Week: Ben Roethlisberger

With no practice time, coming off COVID (with symptoms), and against a stout pass defense, Roethlisberger was great on Sunday night—throwing for 273 yards and three scores in a 41-37 defeat. Big Ben and the Steelers will now hope for revenge versus the Bengals in Week 12.

The shocking results around the league continued yesterday, and Dallas was probably the most disappointing with zero players finishing with double-digit fantasy points: Dak Prescott (2.64), Ezekiel Elliott (9.8), Tony Pollard (8.0), CeeDee Lamb (2.9), Michael Gallup (6.9), and Dalton Schultz (8.3). Now they could be without both Lamb (concussion) and Amari Cooper (COVID) for a quick turnaround to face the Raiders on Thanksgiving.

Opportunity was the question mark for Moore as opposed to any concerns about talent, but he’s turned it on since being featured in Week 8—going for lines of 6/67, 7/84/2, 3/44/1, and 8/141/1 over his past four games. No matter who is under center next week against the Texans, Moore needs to be the offensive focal-point.

Taylor had an historic outing with 51.9 fantasy points on Sunday, and he’s firmly established himself as arguably the top fantasy asset, running back, and offensive weapon in football. As long as Indy keeps feeding the second-year runner, he should be the 2021 Fantasy MVP in our end-of-season article.