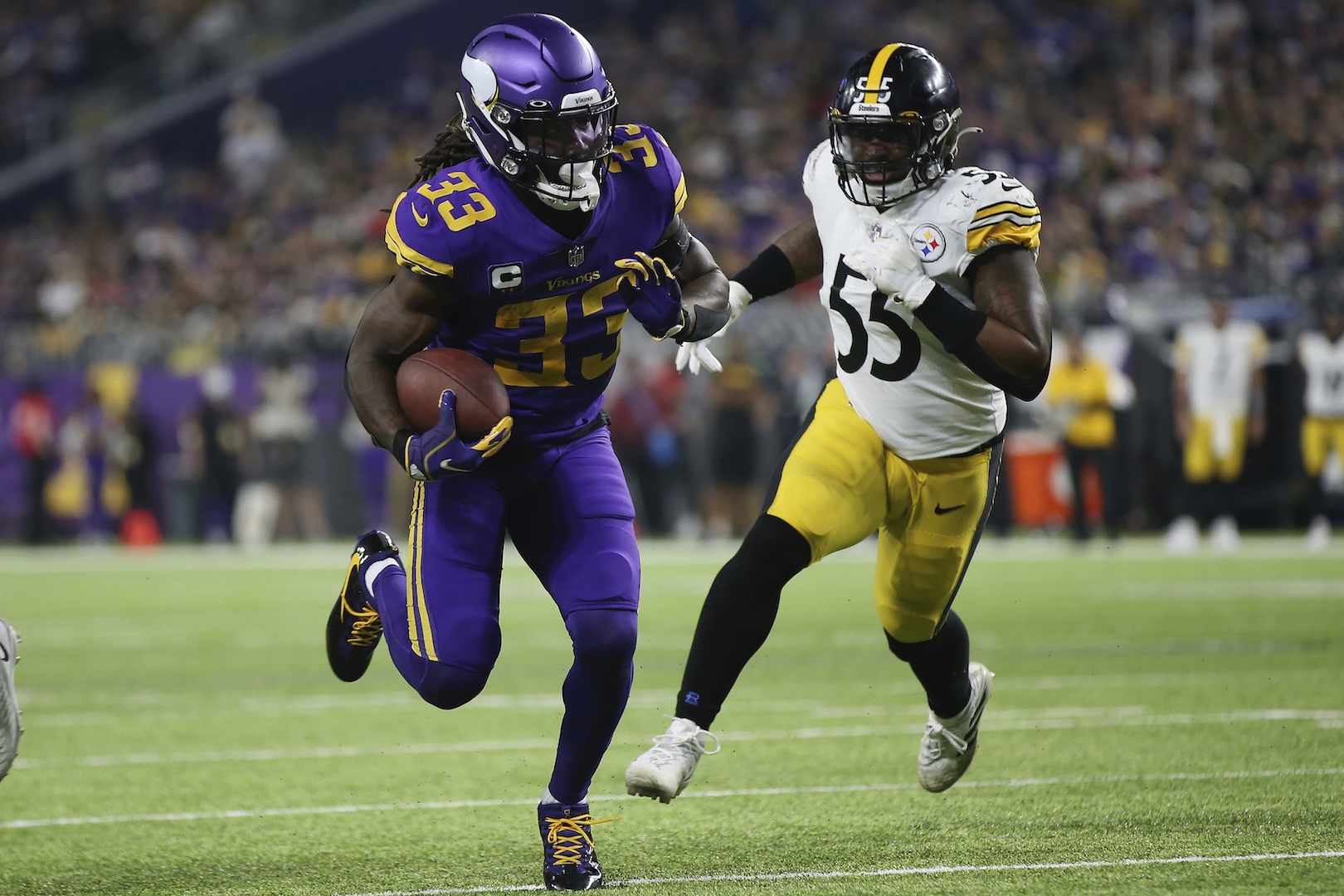 Buffalo’s offense was limited to three points in the first half of Sunday’s eventual 33-27 loss in overtime, but Allen left it all on the field with 308 passing yards, two passing touchdowns, and one interception on 54 attempts—also adding 12 carries for 108 yards and a score as a runner. Due to the production on the ground, Allen finished with a week-high 35.22 fantasy points and remains in a horse race with Tom Brady as the overall QB1 on the year.

Despite playing through a shoulder injury that was supposed to keep him out for three weeks, Cook returned last Thursday night to dominate for Minnesota—rushing 27 times for 205 yards and two touchdowns. Hopefully anyone reading this didn’t bench him due to fear of a setback and/or limited workload.

After an encouraging performance against the 49ers two weeks ago, Penny was given a chance to be the clear lead back—and he did more than take advantage with 16 carries for 137 yards and two touchdowns. The former first-round pick hasn’t lived up to expectations for the Seahawks, but he’s now averaging 5.1 yards per carry for his career.

A hamstring injury certainly wasn’t a factor for Adams on Sunday night, as he caught ten-of-13 targets for 121 yards and two touchdowns in a 45-30 victory. The first score was a highlight, out-and-up move from the slot from 38 yards away, and then Adams sealed the game by shaking emerging star cornerback Jaylon Johnson on a slant near the goal line.

WR: Tyler Lockett, SEA
Lockett was also able to get loose for a long score yesterday—finding a way behind Houston’s defense for a 55-yard touchdown that gave Seattle the lead at the end of the first half. Overall, Lockett finished with five receptions, 142 yards, and the score.

He was nearly shutout against Minnesota to close out November, but Kittle has been on fire this month—turning 15 targets against Cincinnati into 13 receptions, 151 yards, and a touchdown (which was his sixth of the season to give him a career-high). For anyone hoping the hot play continues, it’s notable that all of Kittle’s touchdowns have come since Week 9.

Pittsburgh falling behind 29-0 last Thursday night put Harris squarely in the danger zone of a quiet game, but he was instrumental in the comeback attempt with 23 touches, 104 total yards, and two total touchdowns. The rookie is likely a top-five running back the rest of the way.

NFL Defensive Player of the Year candidate Micah Parsons was again an absolute force in Week 14, and he led the Dallas defense to a 24-point fantasy performance—with the unit combining for five sacks, three fumble recoveries, and interception, a blocked kick, and a touchdown.

Baltimore losing Lamar Jackson and playing from behind didn’t matter for Tucker—who nailed a couple of field goals from 50+ yards and almost was put in position to hit another after the team recovered a late onside kick.

Surprise of the Week: Rashaad Penny

We had Penny ranked highly this week (RB22), but finishing as the overall RB2 was a definite surprise, and touchdown runs of 32 and 47 yards swayed plenty of fantasy matchups with playoffs on the line. Look for him to remain the lead back the rest of the way.

Disappointment of the Week: Jermar Jefferson

There were again many disappointments this week, but with fantasy playoffs on the line, many were given a goose egg by Jefferson—who was ranked as an RB3 by the consensus and didn’t record a touch on three offensive snaps. Even a fumble by Godwin Igwebuike wasn’t enough to give Jefferson an opportunity, and Craig Reynolds looks like the back to own if D’Andre Swift (shoulder) and Jamaal Williams (COVID-19 list) are out again in Week 15.

Rookie of the Week: Najee Harris

Tough and creative running by Harris to pick up a key fourth-down conversion opened the door for the Steelers’ comeback effort against Minnesota, and the former Alabama star—averaging 18.2 carries and 4.6 receptions per game—continues to be featured as the workhorse. He’s a top candidate to win Fantasy Rookie of the Year.

Cook wasn’t the highest-scorer of the week (Josh Allen got him by less than a point), but with fantasy playoffs on the line, he came through with 34.7 fantasy points to easily set a new season-high. The situation and numbers—with a second career 200-yard game—makes Cook well deserving of MVP honors for this week.