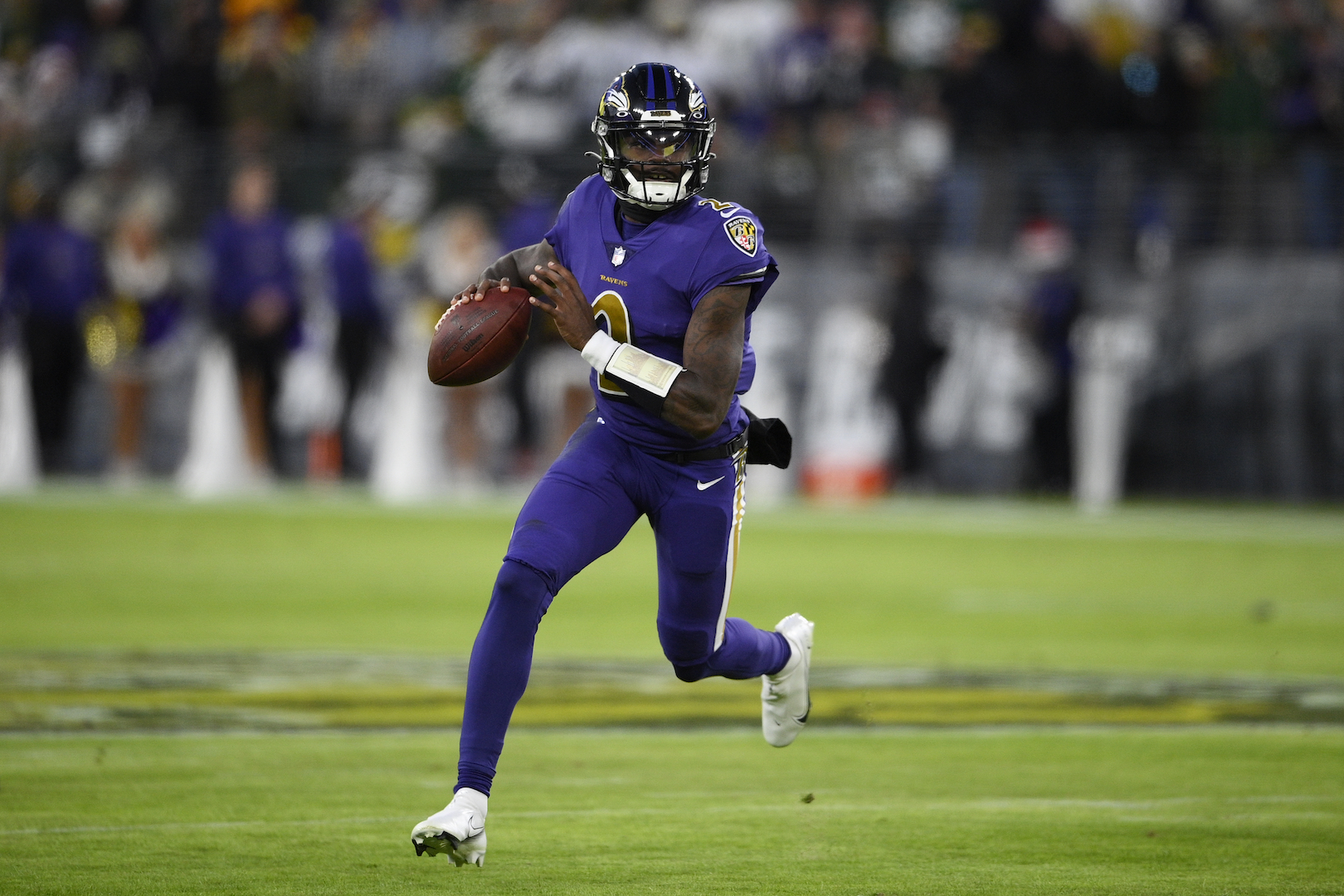 Huntley was a fantasy force in place of Lamar Jackson (ankle) against Green Bay—throwing for 215 yards and two touchdowns with 13 carries for 73 yards and an additional two scores on the ground. The performance gave him 35.9 fantasy points to sway fantasy matchups for anyone that took a gamble on the second-year quarterback.

Johnson also swayed matchups for anyone that stuck with him, as the veteran totaled 127 yards and two touchdowns on 23 touches after drawing the start for the Dolphins. There is a good chance he remains the lead back over the final three games with Miami hoping to continue their late-season playoff push.

Indianapolis wisely remained committed to Taylor on Saturday night by feeding him early and often, so after being contained on “just” 103 rushing yards and zero touchdowns—he eventually broke through with a 67-yard score to seal the win over New England. Since the start of October, Taylor has 19 touchdowns in 11 games.

Hill had been in a bit of a slump heading into the fantasy playoffs, but the Chargers couldn’t slow him down with the Kansas City offense coming alive late. On 13 targets, Hill caught 12 passes for 148 yards and a touchdown to finish with 26.8 fantasy points.

Cooks continues to be the favorite target of Davis Mills, and he caught seven passes for 102 yards and two touchdowns in a win over Jacksonville on Sunday. The 28-year-old is 53 receiving yards away from his sixth 1,000-yard campaign over the past seven seasons.

Disappointment for Kelce owners was bubbling heading into the fantasy playoffs with 27 scoreless yards in back-to-back games, but he more than made up for the struggles by catching ten passes for 191 yards and two touchdowns—including the game-winning score in overtime—last Thursday night. In the process, Kelce extended his record of consecutive seasons with 1,000 yards at tight end (six).

Someone putting up 30+ fantasy points is usually enough to easily claim the tight end spot in our Team of the Week, but Andrews owners certainly won’t complain about him settling in as the FLEX for Week 15. Despite not having Lamar Jackson at quarterback, Andrews caught ten passes for 136 yards and two touchdowns in a 31-30 loss to the Packers.

Pittsburgh took some time to settle in against Tennessee (on both sides of the ball), but they eventually forced four turnovers in a 19-13 victory to finish with a week-high 15.0 fantasy points (pending the four games still to play). The point total was the highest of the season for the unit.

Fairbairn’s position-leading 16.0 fantasy points was boosted by a couple of field goals from 50+ yards in the final minutes of the first half, and overall, he hit all three field goals and all three PAT attempts in Houston’s win.

Surprise of the Week: Duke Johnson

Tyler Huntley deserves recognition here (although we ranked him as a high-end QB2), but Johnson—drawing the start and being treated as the workhorse despite Myles Gaskin and Salvon Ahmed being removed from the COVID-19 list—was a major surprise. Whether it be as a cheap DFS option or Hail Mary in redraft leagues, those who took a shot on Johnson were more than rewarded.

Disappointment of the Week: Various

Even though Kansas City’s stars eventually stole the show, fullback Michael Burton scoring the first touchdown of Week 15 felt like it would set the tone for the fantasy landscape in general—and that’s basically what happened. With a quarter of the week still to go, a bunch of star players failed to reach expectations, and drawing a matchup against someone like Travis Kelce or Mark Andrews might have been enough to end the season for those in one-week playoff matchups.

Following lines of 10/86/1 and 8/73, St. Brown stayed hot by catching eight passes for 90 yards and a score to help Detroit pull off an upset victory over Arizona. With double-digit targets in each of the past three games, the rookie should be viewed as a strong FLEX for plus road matchups against the Falcons and Seahawks over the next two weeks.

Once again deserving of mention, Tyler Huntley made a push and could have been the choice here if Baltimore completed the comeback by hitting on their two-point conversion. But Kelce—as a starter in virtually every league in the world—impacted way more matchups, and his 36.1 fantasy points in 0.5 PPR leagues led all players to begin the fantasy playoffs.