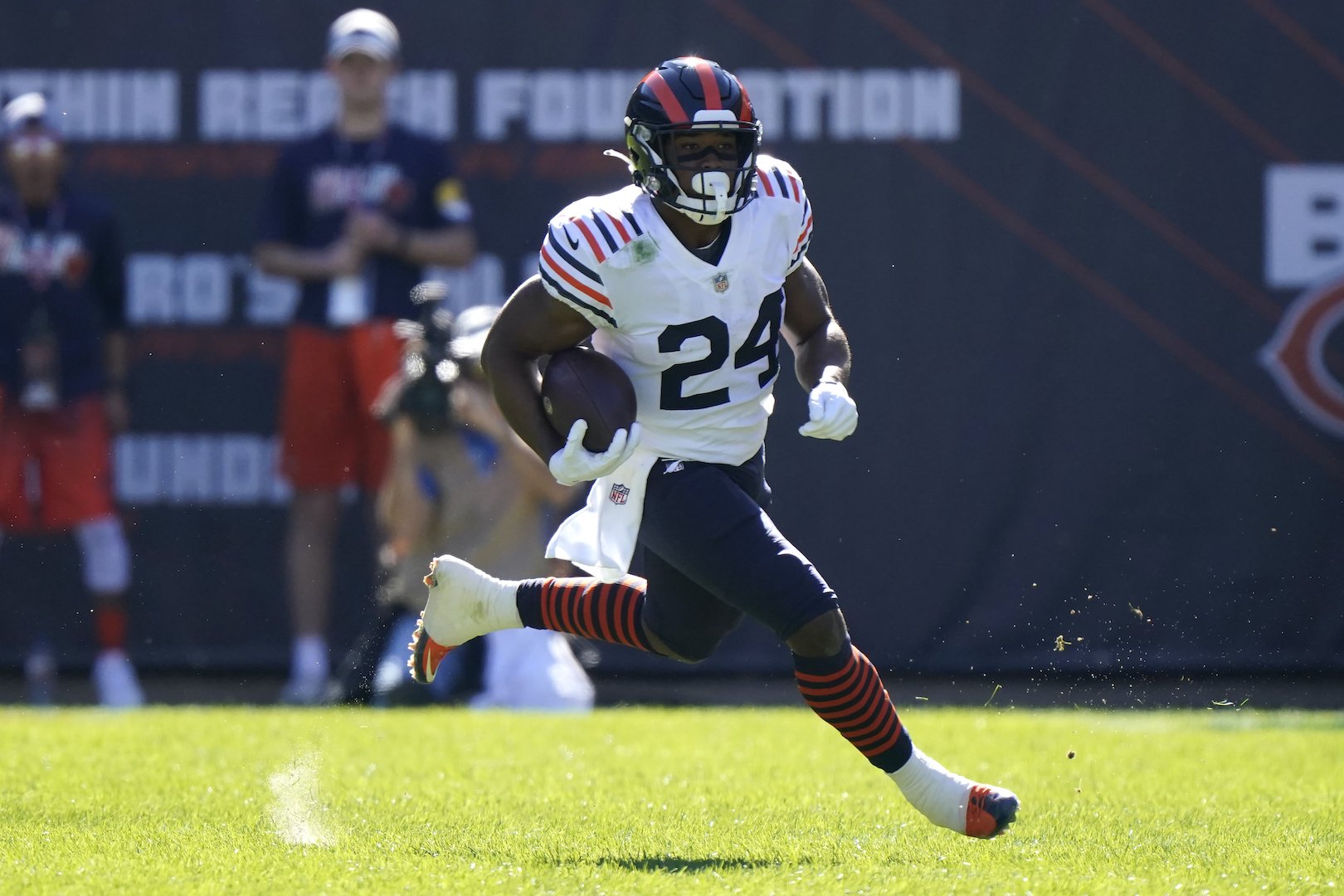 We didn’t get any 40-point performances like we saw last week, but Cousins still had a big game to lead all quarterbacks 28.52 fantasy points—though we’ll see if Josh Allen challenges that tonight. Over his past 16 games dating back to last season, Cousins has thrown for 37 touchdowns and just five interceptions.

Taylor still isn’t getting enough touches, but he turned 14 carries into 145 yards and two touchdowns against Houston, and hopefully you stayed patient with the superstar back. This month, Taylor has gone for yardage totals of 114, 169, and 158—and he’s totaled five touchdowns in three games.

RB: Leonard Fournette, TB
Tampa Bay committing to Fournette as their clear lead back has resulted in tremendous numbers, and he was able to total 135 yards and two touchdowns against the Eagles last Thursday night. The next couple of matchups to finish off the month appear difficult (v CHI, @ NO), but Fournette is almost in must-start territory.

New England did a good job containing Lamb for most of the game yesterday, but he started to heat up late, including the game-winning touchdown in overtime from 35 yards away. That play and all the other production in the second half (after just 22 yards in the first half) led to a 9/149/2 finish and overall WR1 honors heading into Monday Night Football.

The pendulum swung decisively back in Kupp’s direction after “only” 78.0 receiving yards per game through the first two weeks of October, as he caught nine passes for 130 yards and his first two scores of the month in LA’s blowout win over the Giants. Kupp will remain a high-end WR1 as the only player in the league with double-digit targets in every game.

TE: Mike Gesicki, MIA
Gesicki caught eight-of-nine targets for 115 yards in the London loss to Jacksonville, and he’s been a central part of the passing attack since being held without a catch in the opener. That said, we believe the Dolphins need to do a better job of getting Gesicki involved in scoring territory—and they might not sit at 1-5 if they did.

After limited touches with his ankle injury in Week 5, Mixon was given a heavy workload against Detroit—rushing 18 times for 94 yards and catching five-of-six targets for 59 yards and a score. It was a very encouraging performance with the all-around back had been limited to eight receiving yards in the previous four games; Mixon needs to be featured again for a divisional tilt with the Ravens.

Daniel Jones had done a great job taking care of the ball all year with one interception entering Sunday’s action, but he tossed three picks versus the Rams—and also lost a fumble in the 38-11 defeat. The Los Angeles defense will remain a top-flight fantasy unit next week when the struggling Lions come to town.

Matthew Wright deserves mention here with 16.0 fantasy points and the game-winner for Jacksonville—but he was used in almost no leagues considering the Jags didn’t have a field goal before Sunday. Instead, the nod goes to Prater after he hit three field goals (and all seven kicks total) despite weather said to be a factor for Cardinals-Browns.

Surprise of the Week: Raiders offense

Another low-scoring game was very possible without Jon Gruden for the first time, but Derek Carr lit up Denver’s secondary—on the road—for 341 yards and two scores while second-year wideout Henry Ruggs III had another strong performance (3/97/1). Even Kenyan Drake came alive with two touchdowns, so we’ll see if they can stay hot in Week 7 versus the Eagles.

Disappointment of the Week: Chargers offense

Chargers-Ravens was supposed to be fantasy gold, but Justin Herbert was surprisingly erratic—leading to a 34-6 loss and sub-par performances from Herbert (11.0 fantasy points), Austin Ekeler (7.5), Keenan Allen (7.5), and Mike Williams (3.7). Fortunately, the team will get a chance to regroup with a bye, and Williams in particular should be healthier for LA’s next game.

Rookie of the Week: Khalil Herbert

In came in a loss to the rival Packers, but Herbert was tremendous in his first career start—rushing 19 times for 97 yards and a touchdown (plus two receptions for 15 yards). The rookie showed impressive vision and was a tough player to tackle, so he could even be the lead back when Damien Williams (COVID-19 list) is back… and we’d expect he will have a role for a run-heavy offense when David Montgomery (knee) returns, too.

Lamb is the obvious choice here with 31.6 fantasy points, and the Cowboys will still clearly air it out despite a great run-pass balance so far in 2021. Through six games, Lamb has per-game averages of 5.5 receptions, 82.8 receiving yards, and 0.7 receiving touchdowns—along with 15.1 yards per reception and 10.1 yards per target.