WOLF SPORTS ALERT There may be temporary bugs due to site performance upgrades. Thank you for your patience!
Home / frontfantasy / Week 6 Fantasy Football Rankings 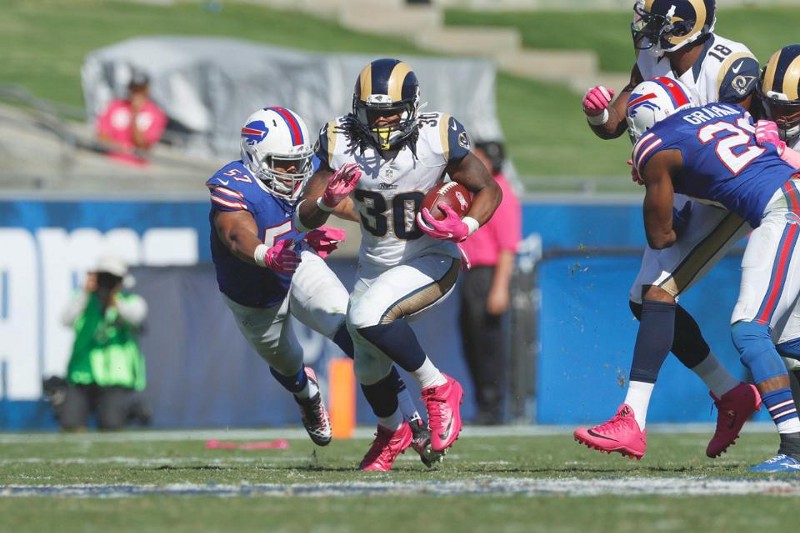 
If you’re looking for fantasy help, our weekly rankings are a great asset to use when making your decisions. These rankings are for standard leagues. But it’s not that complicated to use them for PPR; simply give a bump to guys that will catch more passes (like David Johnson, Julian Edelman). We WILL update these rankings throughout the week if there are any changes/news that comes along

Tom Brady passed for over 400 yards and 3 touchdowns in his season debut. No big deal… If he returns from his concussion, Cam Newton will be in a shootout with Drew Brees this week… Ben Roethlisberger should have no problem with the Dolphins defense… Carson Palmer will be a great option this Monday night against a leaky NYJ secondary… Matt Ryan is still fantasy’s #1 player, and Derek Carr is #3… Philip Rivers gets a tough game in Denver while Alex Smith gets an easy one in Oakland coming off a bye… Averaging just over 12 fantasy points per game, it might be time to take Eli Manning out of lineups.

Although they have not allowed a rushing touchdown this season, the Lions are allowing the 2nd most yards per rush in the league. Todd Gurley should finally go off… DeMarco Murray should continue dominating against Cleveland, and Derrick Henry could even get some more work… LeSean McCoy should see some huge holes against the Niners this week… Coming off a bye, Jamaal Charles could be unleashed against a weak Oakland defense, but Spencer Ware will still see playing time and is a solid FLEX in easy matchups… Despite seemingly tough matchups, Mark Ingram faces a Panthers team that was just run on by a 3rd-stringer, and Melvin Gordon gets a Broncos team that is actually allowing 115.4 yards per game on the ground and over 4 yards per carry… Ezekiel Elliott does have a tough matchup, as the Packers have given up just 2.0 (!) yards per carry. It’s tough to bench the league’s leading rusher, but temper your expectations… Rookie 5th-rounder Jordan Howard has been awesome for the Bears… If Jonathan Stewart returns, he has a juicy matchup in New Orleans, but if not, Cameron Artis-Payne should vault up the rankings after rushing for 85 yards and 2 scores on Monday night… The Raiders “hope” Latavius Murray (toe) will play this week. The two rookies DeAndre Washington and Jalen Richard didn’t do anything against San Diego in Week 5 to diminish Murray’s lead back status… Tevin Coleman and Devonta Freeman are both FLEX options in a tough matchup, but their big-play ability makes them tough to sit… The Patriots obviously passed more with Tom Brady back, which bodes well for James White’s outlook, and isn’t so good for LeGarrette Blount’s… The Redskins are allowing the most yards per rush in the league, but it’s tough to trust Ryan Mathews after fumbling late in Sunday’s loss with Darren Sproles, Kenjon Barner, and Wendell Smallwood also in the Philly backfield.

Sorry to everyone that is playing against Antonio Brown this week… Allen Robinson and Allen Hurns should do some damage versus the Bears and coming off a bye week… Jordy Nelson saw a whopping 13 targets last week, but only caught 4 of them. He just looked off after his diving touchdown catch, but he and Aaron Rodgers should be back on the same page this week. Randall Cobb owners should be happy to see him more involved on Sunday night… Brandin Cooks should be next in line to torch Carolina’s secondary… A.J. Green and Julio Jones have tough matchups, but Cincy should be trailing in New England, and Brandon Marshall got the best of Richard Sherman a couple times in their Week 4 matchup… Speaking of Brandon Marshall, he should see a lot of Patrick Peterson on Monday night… Jeremy Maclin should benefit from the bye week. Oh, and he faces an Oakland defense allowing the most yards passing yards per game… John Brown disappointed last week with Drew Stanton under center, but Carson Palmer should be back. The Jets just allowed Sammie Coates to catch 6 passes for 139 yards, and 2 touchdowns… Sammie Coates could have had like 50 points last week, and he really could this week versus Miami… Will Fuller V could benefit from Vontae Davis guarding DeAndre Hopkins… Chris Hogan seems to have a great connection with Tom Brady… DeSean Jackson and Brandon LaFell both face their former teams this week, and touchdowns seem to always be scored in those games.

Rob Gronkowski’s big game came with Tom Brady returning, and he will find the end zone one of these weeks (perhaps multiple times)… The Saints have actually defended tight ends well, but Greg Olsen should find himself in a shootout… Jimmy Graham looks like he might be back. He’s a top-5 play against a Falcons team allowing over 12 fantasy points per game to tight ends… Gronk might be waiting for his first TD, but Martellus Bennett certainly isn’t. There will be down weeks, but Bennett has multi-score upside every week… Jordan Reed has done well versus the Eagles in the past, but they have been #1 at defending tight ends so far this year, literally allowing 1 point per game… If he finally plays, Tyler Eifert might find some holes in the New England defense with A.J. Green getting so much attention.

No Vikings this week, so the Arizona Cardinals are the clear #1 defense, as the play at home in primetime versus a interception-happy Ryan Fitzpatrick… The Buffalo Bills have been stingy as of late, and get the first look at Colin Kaepernick, who couldn’t even beat out Blaine Gabbert for the starting job… Ryan Tannehill and the Dolphins offense looks awful. It’s good news for the Pittsburgh Steelers… The Denver Broncos and Seattle Seahawks face some really good offenses this week, but are tough to bench… The New York Jets could get demolished on Monday night, but Carson Palmer could also short-circuit.