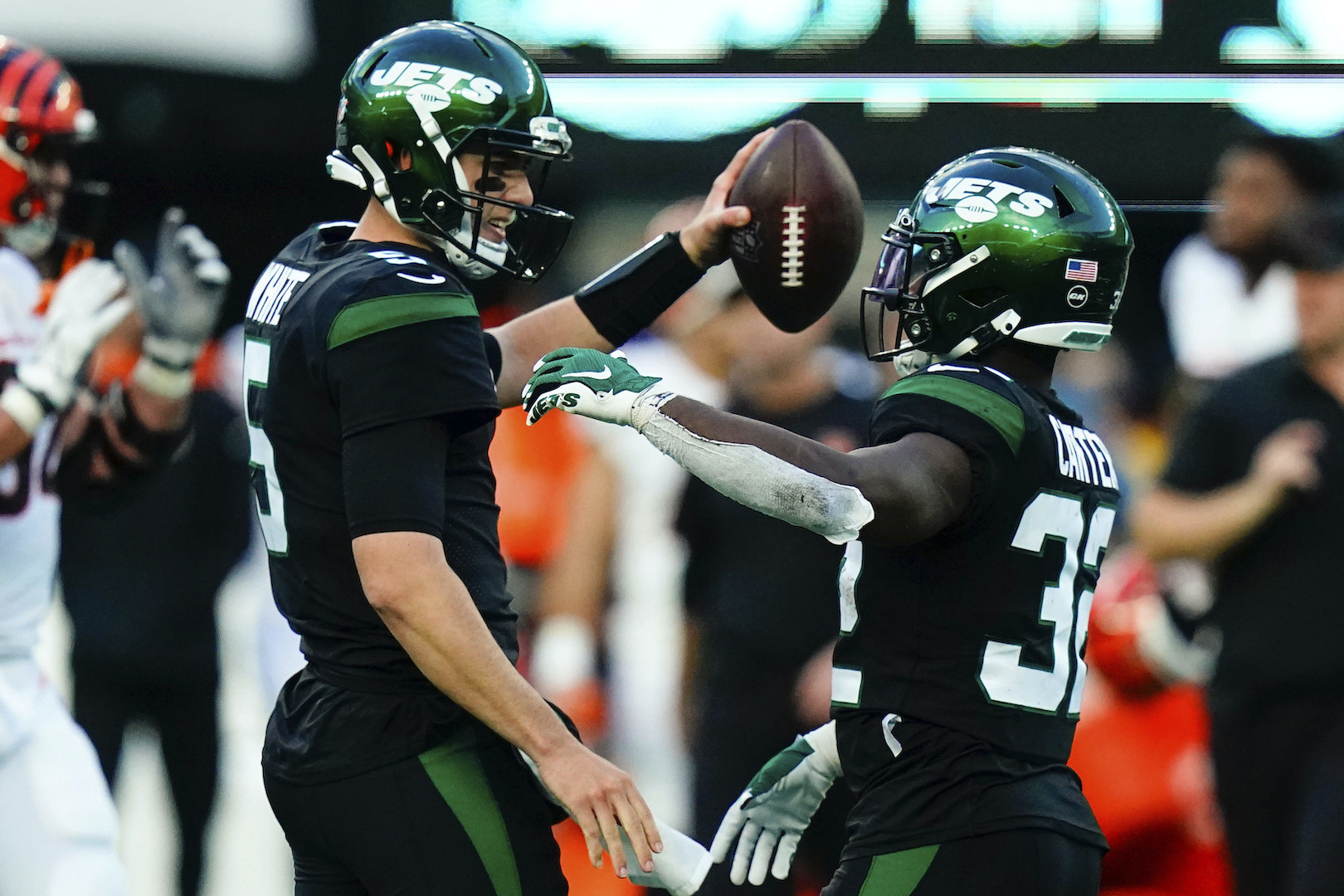 Buffalo was limited to three points at the half on Sunday, but Allen and the offense exploded to finish off Miami—leading to an overall QB1 finish (29.46 fantasy points) heading into Monday night. It’s been great to have Allen continuing to dominate as a runner, and he’s averaged 30.4 fantasy points per game over the past five outings.

Carter saw increased usage as a pass-catcher in Week 7 with Mike White under center, and that remained the case yesterday with nine receptions (on 14 targets) for 95 yards in addition to his 15 carries for 77 yards and a touchdown. The rookie being treated as the clear lead back with at least 70% of the snaps played in back-to-back games is a great sign for his rest-of-season outlook.

Mixon was also productive as a receiver in the Bengals-Jets game—catching four-of-five targets for 58 yards and a touchdown to make up for being bottled up as a runner (14 carries for 33 yards and a score). The star runner has scored six times over the past five games, and he’ll be featured for a big game versus Cleveland in Week 9.

Brown was again dominant for Tennessee’s passing attack yesterday—helping power the Titans to an overtime victory with a 10/155/1 line on 11 targets. Since coming alive in the second half of the win over Buffalo in Week 6, Brown has caught 25-of-28 targets for 379 yards and two touchdowns across his last ten quarters of football.

Even though it came in a loss, Tampa Bay’s offense successfully played through Godwin against the Saints—resulting in eight receptions for 140 yards and a touchdown. The Bucs now head into a bye, but Godwin should remain a strong WR1 option down the stretch.

There were no monster games at tight end this week, so a steady performance for Hockenson (ten receptions for 89 yards) has him currently leading the position with 13.9 fantasy points. Detroit getting some help outside the numbers could potentially open up chunk plays for Hockenson following a Week 9 bye.

Indianapolis threw the ball far too much in their loss to Tennessee, but anyone who started Pittman Jr. isn’t complaining about it, as he stayed hot with ten receptions (on 15 targets) for 86 yards and two touchdowns. The second-year wideout is on pace for a 96/1,262/9 receiving line through eight games.

The matchup was encouraging versus Detroit, but Philadelphia—based on what they had shown in recent weeks with zero sacks in back-to-back games—wasn’t an elite play on the road, so having their best performance of the season with 20.0 fantasy points was a major boost to anyone that streamed them.

Gonzalez hit all four of his field goal attempts in a 19-13 victory for Carolina, and two of them coming from 50+ yards gave him a week-leading 17.0 fantasy points at the position.

Surprise of the Week: Mike White

White was the first Jets quarterback to throw for 400+ yards in two decades, and he knocked off what was the AFC’s top-seeded team in his first career start. Aside from the passing yardage, White also threw for three touchdowns (bouncing back from two interceptions) and caught a two-point conversion. And he did it without top wideout Corey Davis (hip) in the lineup.

Disappointment of the Week: Kenneth Gainwell

Week 8 had an inordinate amount of disappointments (including high-profile players), but Gainwell is the choice because he was basically a non-factor in the first game without Miles Sanders (ankle)—while both Boston Scott and Jordan Howard scored two times each. Hopefully people stuck with our weekly rankings by starting Scott (RB27) over Gainwell (RB29)

Rookie of the Week: Michael Carter

Carter finishing as the top running back of Week 8 could also have fallen under Surprise of the Week, but he’s the clear choice here. The North Carolina product should continue to be featured—including as a pass-catcher—no matter who is under center for New York.

The only thing Brown didn’t do on Sunday was complete his lone pass attempt, but he again came through as a high-end WR1 after breaking through with a 57-yard catch-and-run touchdown in the second quarter. Derrick Henry (foot) unfortunately looking to be done for the season will have Tennessee leaning heavily on Brown the rest of the way.