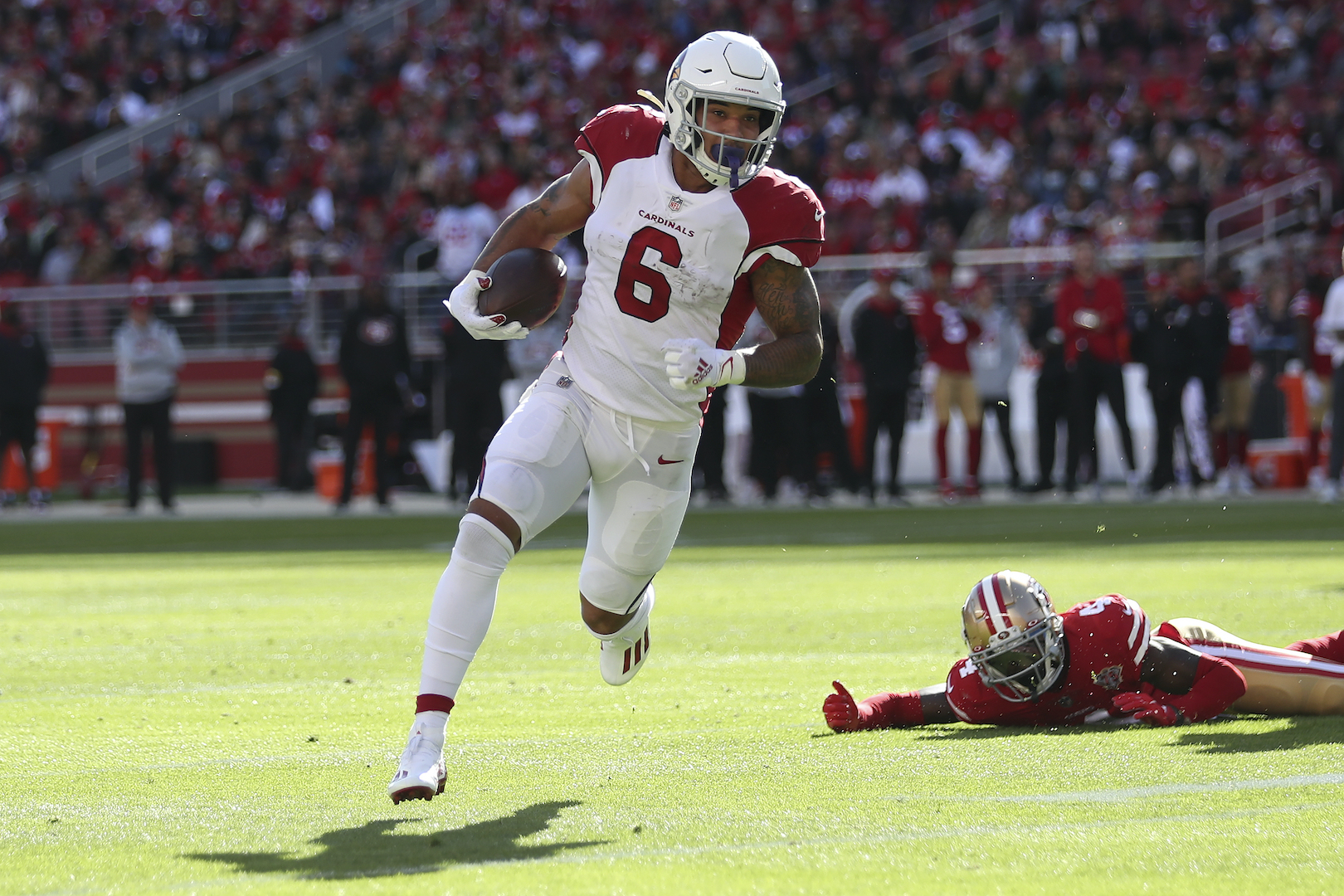 Herbert (31.64 fantasy points) narrowly edged out Lamar Jackson (30.64 fantasy points) as the top quarterback of Week 9, and he was able to pick apart Philadelphia’s defense with 32 completions on 38 attempts on his way to 356 passing yards and two scores. For good measure, Herbert also rushed for an eight-yard score and converted a two-point conversion.

The touchdown upside of Conner has made him an every-week RB2 option in Arizona’s offense, but he shattered the ceiling as the feature back with Chase Edmonds (ankle) going down after one touch. Overall, the veteran rushed 21 times for 96 yards and two scores, and he added a 5/77/1 line as a receiver—boosted by a 45-yard screen he took for six.

Taylor also had a huge day jolted by a long touchdown—taking a 78-yard sprint down the right sideline to give him exactly 200 total yards and two scores on 21 touches against the Jets. Derrick Henry (foot) being out and Christian McCaffrey still working his way back should have Taylor ranked as the top play at the position once again in Week 10.

A 19-yard touchdown in the first quarter got Moore on the board for his first NFL score last Thursday night, and he later found the end zone on another 19-yard touchdown—showing great balance to get into the end zone. New York’s second-round pick should have earned a full-time role in the second half of the season.

Smith only had six targets for a run-heavy game plan in Philadelphia, but he took full advantage with five receptions, 116 yards, and his first touchdown since the opener. The reigning Heisman winner was on the receiving end of multiple strikes from Jalen Hurts, and that connection should only get better.

There was reason to be a bit skeptical about Kittle—coming off a multi-week calf injury—as a high-end TE1 against an Arizona defense allowing the fewest points per game to the position, but the superstar tight end was one of the lone bright spots for San Francisco on Sunday. Fantasy owners can’t complain about a lost fumble for the week’s overall TE1, who caught six passes for 101 yards and one touchdown.

Feeding Chubb is what Cleveland needed to do if they wanted to turn things around, but that wasn’t even necessary with the offensive centerpiece shredding Cincinnati with 137 yards and two touchdowns on 14 carries. Now averaging career-highs in rushing yards per game (103.0) and yards per carry (6.0), Chubb should remain a high-end RB1 the rest of the way.

Carolina had been playing the Patriots tough on Sunday, but Sam Darnold continued to struggle with ball security—tossing three bad interceptions in an eventual 24-6 loss. The lowlight was an 88-yard pick-six by J.C. Jackson on an ill-advised attempt, and it resulted in 19.0 fantasy points for New England’s unit.

On a night where the offense struggled for Los Angeles, Gay was still able to put up a week-leading 12.0 fantasy points by hitting three field goals, including a 54-yarder. Sean McVay’s history with opting for field goals rather than going for it on fourth down is always a boost for Gay’s outlook.

Most of the surprises for Week 9 were disappointments, but on the flip side, Ryan—on the road without No. 1 wide receiver Calvin Ridley (personal)—was able to light up New Orleans for 343 yards and two touchdowns in a last-second victory for Atlanta. The former NFL MVP will hope to stay hot next week in Dallas.

Disappointment of the Week: Various

Like when a quote/saying can attributed to a bunch of people or no one in particular, “various” is really the only option for what went on this week for fantasy football (and the NFL in general). Stars such as Josh Allen (9.56 fantasy points), Aaron Jones (5.3), and CeeDee Lamb (3.3) were outscored by off-the-radar players like Josh Johnson (24.48), Eno Benjamin (9.9), and Malik Turner (17.8).

To further show how crazy Week 9 was, Moore and DeVonta Smith (two rookies) were the only wideouts to finish with 20+ fantasy points heading into Monday night. For Moore in particular, talent has never been in question, and he’s gone for lines of 6/67 and 7/84/2 over the past two games; the arrow is pointing up.

Conner’s three-score performance on Sunday felt like a throwback to his breakout season in Pittsburgh, and his 37.8 fantasy points surely slanted quite a few matchups this week. The 26-year-old leads the NFL with 11 total touchdowns and will get a great chance to build on it this month if Chase Edmonds (ankle) is placed on injured reserve.