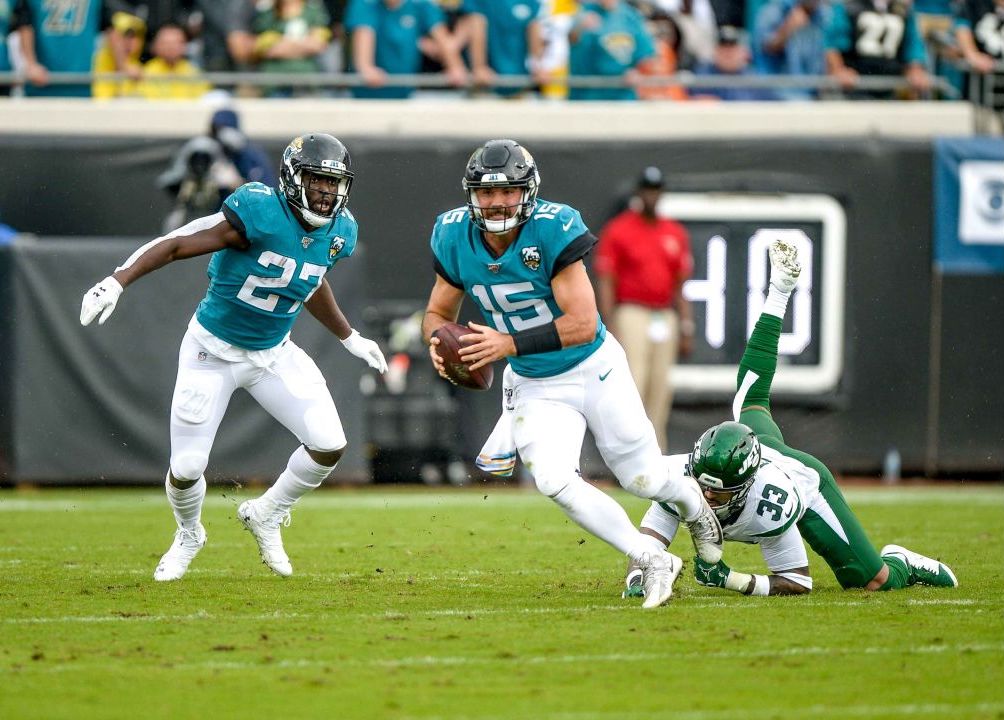 Week 9 Fantasy: “Thumbs Up, Thumbs Down”


Be sure to check out our Week 9 rankings or get an expanded explanation for any start/sit decision with Fantasy Consigliere. Happy Halloween!

Including the season opener this year, Prescott has destroyed the Giants over the past two meetings—throwing for 396 yards per game with an 8:0 touchdown-interception ratio (32.4 fantasy points per game). New York should be more stout up front after adding former No. 6 overall pick Leonard Williams to the defensive line, but that should only make the Cowboys more likely to air it out again, and Dallas will have all their weapons at full strength for Monday night. Dak is a no-doubt top-five option at quarterback.

Carr has thrown for two or more scores in four of the past five games, and he will now face a Detroit defense that has allowed big performances to Kirk Cousins (338 yards, four touchdowns) and Daniel Jones (322 yards, four touchdowns) in back-to-back weeks. Even if top corner Darius Slay (hamstring) suits up for the Lions, Oakland has the size at receiver to present problems for him. Carr should be viewed as a low-end, high-floor QB1 for the team’s first home game since Week 2.

As if the passing numbers for Minshew weren’t impressive enough (11:1 touchdown-interception ratio in seven starts), he’s also brought added production as a runner, including 17 carries for 76 yards over the past two weeks. When the AFC South foes met in September, Minshew rushed for 56 yards, and I expect the rematch will be more high-scoring (Houston previously won 13-12). Since the start of October, the Texans have allowed at least three passing touchdowns in every game.

To see exactly where I have Murray ranked, you can check out our Week 9 rankings, but the matchup actually doesn’t worry me too much for a couple of reasons. First of all, the game will be played at home—where Murray is averaging 21.1 fantasy points per game (compared to 14.7 fantasy points per game on the road)—and San Francisco has had less time to prepare for Kliff Kingsbury’s offense on a short week. Also, we could see more designed runs for Murray to keep the defensive line honest, and the passing attack will run through Christian Kirk and Larry Fitzgerald out of the slot, where the Niners have shown some vulnerability.

They are winning games and Jackson has played great, but in general, Baltimore hasn’t been as creative/versatile as I thought they would be on offense, so there is definitely some concern that New England will simply shut them down on Sunday night. While likely too good to bench in redraft leagues, Jackson’s floor and ceiling both need to be lowered for Week 9.

Minnesota settling for field goals really hurt those who rolled with Cousins last Thursday night, as he was 23-of-26 for 285 yards but scored just 11.6 fantasy points. On the surface, Kansas City would seem to provide a prime bounce back opportunity for a quarterback, but they’ve played better pass defense than the numbers might indicate, and it’s no secret that Cousins has historically struggled against teams with a winning record. I have him as more of a QB2 than QB1.

The Eagles got back on track in Week 8 with a 31-13 victory over the Bills, but it was the running game that led the way, and Wentz was held to fewer than 20 completions for the fifth time in six games. It sounds like DeSean Jackson (abdomen) may finally make his return this week, but I’m still avoiding Wentz against the Bears, who have remained stout in the secondary with 13.5 fantasy points per game allowed to opposing quarterbacks this season.

Through two months of his sophomore campaign, Mayfield is on pace for a 14:27 touchdown-interception ratio, and he has yet to throw for multiple scores in a single game. Fantasy owners might be holding out hope that the talent for Cleveland can get things turned around, but I wouldn’t count on it happening against a Denver defense that has allowed as many single-digit performances to signal-callers as they have double-digit performances.

Despite missing basically all of September with an ankle injury, Coleman already ranks as an RB2 on the season, and the ascension may not stop based on what we’ve seen out of him and the San Francisco offense. In four healthy games, Coleman has handled touch totals of 16, 20, 22, and last week’s 13 (with four of them going for scores in a blowout win), and he should again see a significant workload with Matt Breida (ankle) banged up on limited rest. Plus, it’s worth noting that Coleman shredded Arizona for 145 yards and a touchdown on 11 carries last season; he’s a top-ten play.

I know fantasy owners have been disappointed by Bell, but head coach Adam Gase has already taken accountability for him handling just 12 touches in last week’s loss to the Jaguars, and I would be surprised if New York’s best offensive player didn’t at least come close to doubling his carries (nine) and receptions (three) in Miami. Bell’s former teammate James Conner just rushed 23 times for 145 yards (6.3 YPC) and one touchdown against the Dolphins, and Le’Veon will look to have a similar performance this weekend. Keep him in lineups as an RB1.

Melvin Gordon remains the top play in the backfield for Los Angeles, but I think there will be enough work this week for both he and Ekeler to return solid RB2 value. While the Packers have improved over the past month, they’re still allowing 4.8 yards per carry, and Ekeler is on pace for over 100 receptions at the season’s midway point. Especially if Green Bay gets Davante Adams (toe) back, this matchup has shootout written all over it.

I have seen some people worried about Davante Adams’ potential return draining some value from Williams, but I don’t see why that’d be the case. With Green Bay’s No. 1 receiver in the lineup, Williams averaged a healthy 11.0 touches per game last month (excluding the TNF game where he was concussed), and Matt LaFleur prefers a two-back system. The BYU product should be a solid FLEX against the soft Los Angeles run defense.

Even including Derrick Henry’s 16 carries for 75 yards (4.7 YPC) last week, the Buccaneers have allowed a league-best 3.0 yards per carry on the ground, and stopping the run seems to be the top priority for Todd Bowles’ defense. Carson is an excellent player that can overcome a difficult matchup, but he needs to be downgraded to RB2 range with starting center Justin Britt (knee) done for the year.

The Bears finally featured Montgomery with a whopping 31 touches in Week 9, and he rewarded them by churning out 147 total yards and a touchdown. However, it didn’t lead to a win, and running on Sunday won’t be quite as easy against a Philly defensive line that showed flashes of dominance last week that really hadn’t been seen in 2019. We had Montgomery as a top-20 play in Week 8, but he’s back to risky FLEX territory.

Gore led the Bills in carries last week, but he played just 29% of the offensive snaps and was outperformed by Devin Singletary (seven touches, 49 total yards, and one touchdown on 68% of the snaps played). Buffalo will hope to play from ahead—potentially tilting things back in Gore’s favor—but they aren’t built to blow teams out, and Singletary brings a little more juice at this point. The veteran likely needs a score to be worth a start.

A crucial fumble earlier this season didn’t lead to any changes the following week in terms of McCoy’s role in the Kansas City backfield, but Sunday night’s costly turnover against the Packers might—especially based on how Damien Williams looked when given a shot in the fourth quarter (when McCoy didn’t even play a snap). In addition to workload concerns, McCoy will be looking for holes against a Vikings defense that has only allowed one rushing touchdown all season.

Robinson was basically uncoverable in January’s playoff loss to the Eagles—he had ten receptions for 143 yards and a touchdown on 13 targets—so if the Bears are going to snap their three-game losing streak, their top offensive weapon needs to be featured against an attackable secondary. Some run-after-catch production has been left on the field this season because of poor ball placement by Mitchell Trubisky, but Robinson’s catch percentage (69.7%) is actually a career-high, and he’s gone for 60+ yards in six-of-seven games. Consider him a WR1.

He didn’t get behind the defense, but Chark went for a 7/55/1 line against the Texans in Week 2, and it feels like the 2018 second-rounder could be in for a monster game across the pond on Sunday. Houston—who has long struggled against deep threats—just allowed Tyrell Williams to go for 91 yards and a score, so Chark is set up nicely on the perimeter. Keep him in lineups as a high-upside WR1/WR2 for Week 9.

As alluded to when discussing Kyler Murray, the 49ers are best attacked in the middle of the field, and Kirk has become the rookie’s favorite receiver with double-digit targets in three-of-five appearances this season, including 11 last week (resulting in eight receptions for 79 yards). San Francisco has obviously taken things to another level, but last year, Kirk went for lines of 3/85/1 and 3/42/1 in two matchups. I feel good about him on Halloween.

Metcalf has been held to 4.7 yards per targets over the past two weeks, but the big plays could start coming again when the Buccaneers visit on Sunday. Even though Tampa Bay hasn’t even faced a strong schedule, they are still allowing the fifth-most fantasy points per game to opposing receivers, and Metcalf’s size/speed will make him a mismatch for their young secondary. D.K. is a top-24 play.

Chris Harris Jr. getting traded would have really boosted Beckham’s outlook for Week 9, but now he’ll likely be faced with a shadow situation against a guy that has limited Davante Adams (4/56), Keenan Allen (4/18), T.Y. Hilton (2/56), and Allen Robinson (4/41) so far this season. OBJ just needs one big play to potentially win a week, but I wouldn’t count on him as anything more than a low-end WR2, and it’s not crazy to bench him if you’re loaded at receiver.

Sanders was able to beat Patrick Peterson and the Cardinals for a 64-yard touchdown last season (though it wasn’t really on Peterson because it was zone coverage and the safety creeped up), but I think that makes it all the less likely he’s able to get loose against them on Thursday night. The veteran receiver is already a full-time player (82% snaps played in 49ers debut), but he still offers a low floor in just his second game with a new team, and I think the Cardinals will play better than people expect.

The Ravens have plenty of weapons on offense, but Brown is the gamebreaker that they really need to worry about, so it would be shocking if Bill Belichick’s defense allows him to get deep. I would expect a similar game plan to what the Patriots did in the playoffs against Tyreek Hill (when he was limited to one reception for 42 yards), making “Hollywood” a desperate FLEX.

McLaurin looked on his way to a big game with four receptions for 39 yards at halftime last week, but college teammate Dwayne Haskins couldn’t connect with him in the second half in place of Case Keenum (concussion), and this Sunday will be a bigger challenge as Tre’Davious White matches up against the rookie. All the “Trick” receivers just need one play to become a “Treat,” but it’s probably not worth the risk if you have other options.

For tight end rankings and personal advice for all your start/sit decisions, subscribe to Fantasy Consigliere until midnight on Halloween using promo code GHOST for a full year of the service (365 days) at just $19.99.