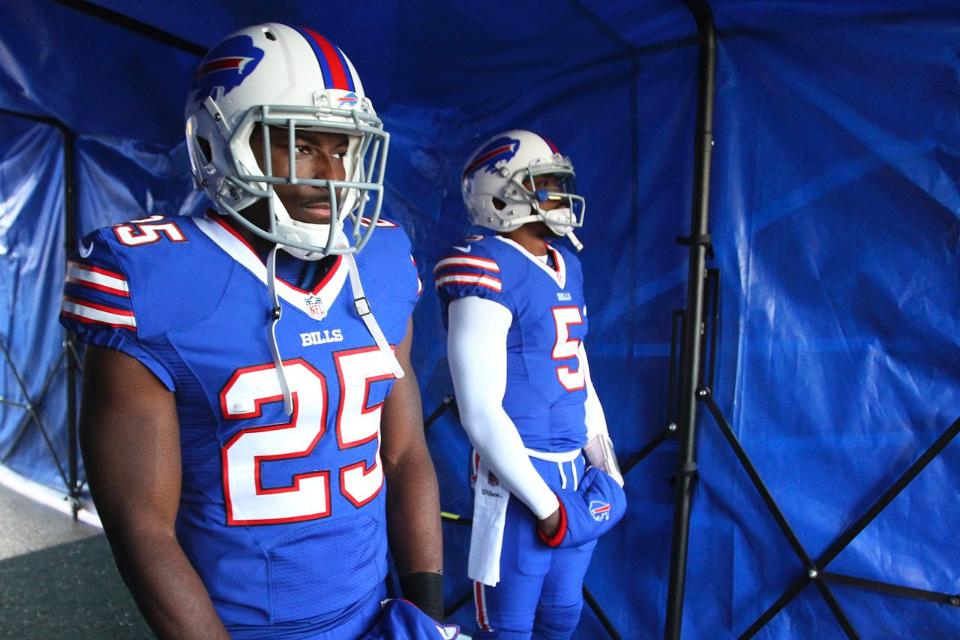 
Fantasy football season is getting closer by the day, and soon enough, it will be time to draft for real. One month from today, every team will be done their first three preseason games, so it would probably be safe to have your fantasy drafts (waiting until after Week 4 of the preseason would be better, but you should at least wait until after Week 3). It’s never too early for a mock draft, though. Here’s the first one of the summer, using a 10-team, standard (non-PPR) scoring format. [Editor’s Note: this is a ‘mock’ draft, so the players are ordered by how they likely will be selected in most leagues based on ADP and consensus rankings, not how they ‘should’ be selected according our rankings, which will be released next month.]

Analysis: Most leagues are drafting Johnson, Bell, and Brown in that order; all three are worthy of the top spot. Zeke falls to seventh overall because of concerns about a suspension, but he will likely be a first-round pick as long as it’s no more than a couple games.

Analysis: The tier below Johnson/Bell/Elliott consists of Melvin Gordon, Jay Ajayi, Jordan Howard and others. Gordon went in the first, but Ajayi and Howard aren’t far behind. In PPR leagues, Devonta Freeman could go ahead of all of them. Also, rookie Leonard Fournette goes off the board at pick #19.

Analysis: Whether they should or shouldn’t go this high, quarterbacks usually start getting selected around now. There’s a good chance Rodgers and Brady are the top two overall fantasy players in 2017, so it’s hard to criticize it. Beast Mode will probably get some second-round consideration because of his name, but we’ll have to see how he looks this preseason.

Analysis: Speaking of name recognition, Christian McCaffrey and Joe Mixon will probably go a little higher than maybe they should, as neither guy will have the backfield to themselves. Still, the talent is there to make a year-one impact. Similar to quarterback, tight ends go off the board early.

Analysis: Dalvin Cook is selected right behind McCaffrey and Mixon, and he will likely climb up boards if Latavius Murray (ankle) is slow coming back. Andrew Luck’s status after shoulder surgery is something to keep an eye on, but we know he puts up numbers.

Analysis: How high or too high for Martavis Bryant? He could go a round earlier or two rounds later. Adrian Peterson will be hotly debated leading up to drafts, but someone in every league will probably take him fairly early based on the name.

Analysis: Some really good middle-round skill position players here, including veteran Frank Gore, Pierre Garcon, and Brandon Marshall. Spencer Ware and C.J. Anderson will look to seize the majority of the backfield work on their respective teams this preseason.

Analysis: Team 3 pairs Ben Roethlisberger with Antonio Brown, and Big Ben could be a strong QB1 if Martavis Bryant can get on the field. Danny Woodhead’s stock sees a big boost with Kenneth Dixon’s injury knocking him out until 2018, but and he should go even higher in PPR leagues.

Analysis: Two Lions backs go in the 9th round, and health will be an important factor for both of them. Paul Perkins and Robert Kelley both go, too, but will need to hold off rookies this season.

Analysis: Anyone drafting Doug Martin is hoping he is able to get the starting job back upon his return from suspension. Defenses start to go off the board—which will undoubtedly happen in many leagues—but that’s probably a mistake.

Analysis: Handcuff round here with Derrick Henry, Kareem Hunt, and Latavius Murray all being scooped up. Kickers start to go off the board, too…

Analysis: A couple teams pickup backup tight ends, which might not be a bad idea in a pretty deep year for the position. Cameron Meredith might slip based on the name and team, but he was impressive in 2016.

Analysis: Jamaal Charles in the 14th round doesn’t seem like something that would ever happen, but he’s not even a lock to make the team. Jacquizz Rodgers will likely have three weeks as the starter for Tampa Bay’s explosive offense.

Analysis: Joe Williams is a clear Kyle Shanahan guy, but he is probably just a handcuff to start the season with Carlos Hyde and Tim Hightower on the roster. Not to be confused with Joe, Jamaal Williams could push Ty Montgomery for early-down work after being picked in the 4th round of the NFL Draft.

Analysis: This should be all kickers in your draft.

BE: WR Josh Doctson (WAS)

BE: RB Robert Kelley (WAS)

BE: RB Samaje Perine (WAS)

BE: WR Willie Snead (NO)

BE: QB Kirk Cousins (WAS)

BE: RB Adrian Peterson (NO)

BE: WR Jamison Crowder (WAS)
BE: RB LeGarrette Blount (PHI)